Godhate - Equal in the Eyes of Death 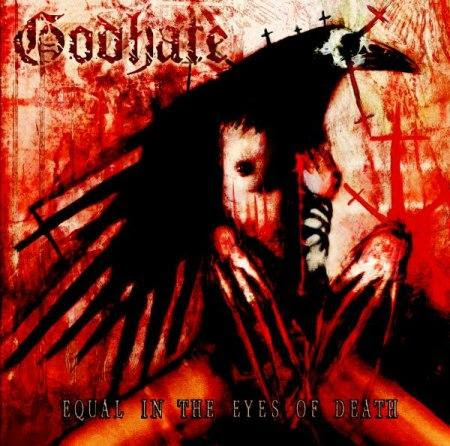 So Sweden's Godhate has some complex backstory involving a name change from the (far superior name in) Throneaeon, a few breakups, and Yoko Ono, but all the history is kind of a moot point. The band's first full length under their new moniker, Equal in the Eyes of Death, is memorable for one particularly bad reason. If the review title wasn't a big enough clue, Godhate are essentially Taiwanese sweat shop model of Vader.

Now, I love Vader, I really do. I've blabbered for eons about how they so perfectly focus on their patented brand of furious blasting death whilst still maintaining a strong songwriting sensibility and attention to groove and memorability. I like their sound, and I actually don't mind bands that take more than a few cues from them. On the other hand, there is one thing I don't like in any form, and that is complete, unabashed, unimaginative tributes to bands greater than your own. I'll admit, I haven't heard a single note of this band's music when they still had a cool name, so maybe this is just a fluke in the scope of their career, but under the name of Godhate, they've recorded one hell of a boring tribute album. "Infinity Shall Be" sounds like a slowed down and far less evocative version of "The Book" from Impressions in Blood, and the title track sounds like something cut from the De Profundis sessions. This should be a good thing, De Profundis is a masterful work of death metal, the finest cut of the cow, surely something that warrants a comparison must be at least somewhat good by default, right? Not necessarily. Imagine that the porterhouse steak of that album was chewed for 14 years before being spat back on your plate. That's Equal in the Eyes of Death in a nutshell. Godhate didn't cook their own steak, they just tried eating Vader's.

Despite this disgusting unoriginality, I must admit there is something underneath the music that keeps me from forgetting this entirely. The first three proper songs are great, with the first of which, "Godhate" actually bordering on fantastic. Maybe it's because all of the songs are extremely samey and they all start to stagnate at that point, but it isn't until the fourth proper song that things start to go downhill, but it's a hell of a steep slope. The well produced and decently written riffs start to blend together, the drumming is surprisingly well varied for a band that's emulating another band that's known for relentless blast beating, and the pure Peter Wiwczarek worship vocals become completely unnoticeable until they spew off some of the more childish lyrics ("DEATH TO GOD! DEATH TO JESUS!"). It seems like all of the good riffs were used up in the first three songs. And it's unfortunate because they're actually damn good riffs, even though they sounded better 15 years ago. I'm gonna try to stop hammering the De Profundis comparisons, so I guess I'll settle by saying they're good, old school, no frills, fast paced, half thrash death metal riffs. I realize I've used precisely one other band to compare them with, but it's seriously that bad. I guess there's some Morbid Angel in here as well, but the pride of Poland is probably about 90% of the influence here, and the vocals really help that comparison. Maybe if they were a bit more guttural or utilized the higher register more often, the deja vu wouldn't be so grating. But as it stands it's a perfectly understandable roar, exactly like some certain other band I don't have to name.

So really, Equal in the Eyes of Death isn't a bad listen per se, it's just a useless one since what they're doing has been done so similarly yet so superior several times before. It starts off pretty good but everything starts to blend after a while. Once again, I'll end this review with a story. One day, I was driving my little brother (who is a huge Vader fan) to football practice. I put this album on and told him it was the new Vader album. He liked it, said it was basically more of the same but nothing particularly bad. When we arrived at the practice field he looked at the album to see the name of it and thus figured out we were actually listening to Godhate. He said "Wow, it's strange, but the fact that that wasn't actually Vader actually made it kind of suck, even though it was good". Strange indeed, but also true. Rehash central.