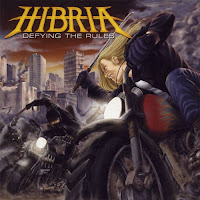 I initially wanted to make it a point to not really reference my old reviews as I rewrote them beyond a quick mention in the title, but I do have to admit that this is probably the one I wanted to do the most.  It's one of the very few I couldn't even glance at without cringing my face into a shape akin to a balloon knot.  I did the early-internet FLAME SHIELD UP thing, I felt the need to put my real name in the title because I was getting popular on MA at the time and arrogantly wanted to be "a thing" there, and I was fucking terrified of the potential blowback for giving the album a mediocre score simply because it was super popular at the time and hadn't scored below a 90%, so even though I was pretty critical of it I tempered my problems a lot and played up the bits I liked and still "only" gave it an 85% (and still acted like a free thinking martyr at the same time).  It was awful.  Be glad I'm killing it.

So... why was Hibria considered the next big thing in the mid aughties anyway?  The answer is simple.  Defying the Rules here is one of the more complete albums in terms of power metal debuts and it fucking ruled.  It's a thundering powerhorse from a group of newbies that sounded 100% fully formed in terms of identity, and it was so showy and immediate that it blew everybody off their chairs.  Power metal was doing pretty well anyway, and Brazil has always been on the map anyway thanks to Angra, but something about these guys just worked.  They had that X factor that so many of their peers lacked.

So why am I so lukewarm on it?  Because I only agree with everything I said up there when it comes to four songs.  The opening triad of "Steelord on wHeels", "Change Your Life Line", and "Meelenyum Quast" are fucking phenomenal, as is the title track a bit later in the runtime.  Everything else just fucking bores me.  They bored me back then and they bore me now, and I wish I had the spine to admit it back in 2008.  "Leeving Under Ice" is just plodding and goes nowhere, "A Kingdom to Share" has an amazing bass run in the intro but totally loses my interest afterwards, "The Faceless in Chahge" is fine I guess but probably needed to be three minutes shorter, et cetera.  The lion's share of this album is just really basic power/speed metal but with extra showy musicianship and a wildly shrieking vocalist.  Those things push Hibria over the edge when they're occupying songs that are written as wild and frantically as their playing requires, but most of this album sounds like five extremely talented dudes thrashing futilely against their chains, desperately trying to break out of the cliches of their chosen genre but utterly failing to do so thanks to their misappropriation of said talents.  The batfuck insane bass runs are always entertaining but they work so much better in a track like "Steelord on wHeels" where the rest of the band is losing their shit and the song itself is flying off the rails than on a track like "Hispeed Breakout" where the tempo is dialed back and the hooks are super basic.

That said, when it works, it works.  One thing that I absolutely adore about the band is how showy and flashy they are.  The good songs work so well because they're flashy in the sense that they're surrounded by dozens of popping flashbulbs from a horde of screaming paparazzi while Marco Panichi does fifteen backwards handsprings down the red carpet while simultaneously playing Yngwie Malmsteen arpeggios on his bass with his teeth.  The opening trinity do this amazingly well, even on "Change Your Life Line" where the song itself isn't quite as insane as the other two.  They sound like they're having the time of their lives, heads spinning like a top while they jump around like chimpanzees.  That's the real distinction between the good and lame songs to me.  There's so much more life in any of the four good tracks than the other five combined.  I realize it's kind of a cop out to just say "I like these songs more" when they're fundamentally not all that different, but that's the magic of songwriting for ya.  Sometimes you assemble the same parts in a slightly different way and create something magical.  Sometimes you write Running Wild with half the charisma replaced with a ton of bass notes like "A Kingdom to Share", sometimes you write Running Wild mainlining adrenaline and meth and lighting your feet on fire like "Meelenyum Quast". Special shoutout goes to the cymbal hits that sound like a fucking sleigh bell in the verses of "Change Your Life Line".

Overall I'd say I still enjoy Defying the Rules, but it's with a huge fuckin' asterisk next to that statement.  The less good songs aren't bad as much as they're just not fully realized.  I've heard the good songs, I know how good they can be, so I know with just a bit of tweaking this could've been one of the best albums of the decade.  There are flaws all over the place, and whether or not they overcome them depends entirely on which song it is.  Iuri Sanson has a huge high ceiling on his range and sometimes he can belt out amazing high notes, other times it sounds like "The Faceless in Chahge" and he just sounds like he's struggling to maintain any power.  The solos fluctuate from exceedingly impressive to excessive and unnecessary, the songs range from maddeningly catchy to frustratingly dull, it's just all over the place despite the pieces always being there.

Also, side note, one time I was listening and singing along to this while driving and absolutely nailed the climactic high note in "Steelord on wHeels" and have never replicated it since.  My friends still give me shit fifteen years later about that high note I toooootally hit that one time when nobody was there to verify it.  The world is unfair.