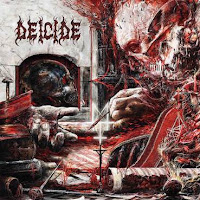 I'm a vocal proponent of the idea that old metal bands should roll over and die already.  Classic bands were classic because of their early work 100% of the time.  How many truly essential albums have really been released late in a band's career?  Dehumanizer?  Debatable (I personally think it's only half good myself), but Sabbath finally put their career to rest a while back so they're out of the picture for the current meta.  Painkiller?  Yeah it was a late career fluke in its time but Judas Priest has been active for 28 years since then and produced nothing but mediocrity since, it's weird to think about it this way but it sits squarely in the first half of their career at this point.  Anything Iron Maiden has released since the 80s ended?  lol get the fuck outta here you no-standards-having scrub.  There are exceptions to every rule of course; Cannibal Corpse has been consistently great throughout their career and, while I don't care for them, Amorphis fans seem to uniformly hold their old and new stuff in equal regard, but on the whole this is a pretty solid standard for me.

So with my eternal frustration with dinosaurs consistently hogging all of the limelight with samey mediocre garbage in mind, I approached Overtures of Blasphemy with a lot of trepidation.  Deicide may have arguably set the standard for American death metal early on, with both the self titled debut and Legion boasting roughly infinity riffs between them and Serpents of the Light being a flawed but entertaining and catchy late 90s death metal release, but their best years are clearly behind them.  Leaving out the amazing fluke that was The Stench of Redemption (many thanks to Ralph Santolla for injecting some fresh life into those fast-decaying veins), six out of their last seven albums over the last twenty years have ranged from forgettable to awful.  Their slide into total irrelevance is tragic considering how brilliant they once were and how much of an unsung death metal MVP Steve Asheim still is.  They shouldn't've even bothered releasing anything else at this point.  Just play fests and go bowling or something.

However, I'm wrong a lot, and Overtures of Blasphemy is proof of that, because holy fuck does this album smoke.

Right from the opening notes of "One with Satan", you can feel this sort of immense pressure building up behind the sustained chords of that monstrously huge opening riff, and when it all finally releases into a thrashy retrodeath throwback about forty seconds in, the walls just start crumbling down and all fucking hell breaks loose.  It just keeps picking up steam as it goes, eventually breaking into a hellish whirlwind of insane blasting and harmonized soloing.  I'm not even kidding when I say all twelve tracks on display somehow manage to keep this manic intensity at a suitably batshit plateau.  The album is sort of front loaded ("Crawled from the Shadows" and "Seal the Tomb Below" are possibly the best tracks on display) but I feel like that's sort of just by nature of them being the first few songs and therefore the ones you're most likely to hear.  Everything is pretty much equally as good, you could've restructured these tracks in any order and you'd be smacked in the gob with a bloody explosion of fury.

One of the more noticeable things about the album is Glen Benton's vocals, because this is the first time I can remember (though it may have been this way on the last album as well, but I don't quite remember because it was five years ago and quite boring) where he's totally abandoned his trademark of layering his deep bellows with his high gravelly rasps.  His high register isn't utilized at all here, it's just bassy gutturals the entire time, and you'd think that removing one of the most quintessentially Deicide elements would produce a very un-Deicide Deicide album, but dammit here we are with arguably their best album in 25+ years.  Maybe it's the injection of fresh blood again after the departure of Jack Owen (though English and Quiron are by no means virile youngsters), but Overtures of Blasphemy has an unarguable sense of renewed vigor.  While this album does fly in the face of most of my beliefs for how and why old bands are so consistently lame in their later years, I do feel somewhat vindicated because even though the band is over 30 years old at this point and Glen is well into his fifties, this sounds young and hungry.  This sounds like it could've been released in 1992, it's a nearly mythical blend of adolescent energy mixed with the tightness that comes with decades of being a touring metal band.  These fuckers haven't slowed down one bit.  Glen sounds as vicious as he's ever sounded, Steve is playing with a level of speed and passion that the new breed of laser guided tech death kids can only dream of reaching, the riffs are up to par and even surpass what the Hoffman brothers produced in their prime, everything about this feels like a band that has everything to prove and everything to lose.  They went for broke here and cashed out big time.

The true strength of this album lies in its hooks, because this is one of the catchiest death metal albums released in some years, it's like some sort of lost Vader album.  Despite the rabid ferocity of the music, there are no shortage of damn near anthemic riffs and choruses.  "Crawled from the Shadows" and "Crucified Soul of Salvation" stand out in this regard, but none of the other tracks really fall flat.  Not a single second is wasted, everything is massive in some way.  The whole album sounds like one relentless monsoon of riffage that drowns everything with an infectious flair.  I'm stunned, they haven't showcased this level of deft songwriting in eons. There's a sort of primal simplicity in what they're doing here, and that sort of feral tunnel vision is a huge boon to the album's memorability.  The solos may be flashy and excessive but it sounds like a stylish bludgeoning more than the dudes showing off how good they are at arpeggios or something, and the rhythm section has such a dedicated single-minded focus on tearing your throat out and making you swallow it without chewing that I'm finding it almost impossible to get these songs out of my head.  Sometimes you just need to pick something simple and be the best at it, and Deicide is proving that even after all these years, they've still got some fuel in their tank.  Why the hell they waited so damn long to showcase it is something I'll never understand, but I'd be lying to you if I said this wasn't some top-tier shit in 2018.

Overtures of Blasphemy has no business being as good as it is, and it's forcing me to eat my hat in the bloodiest way possible.  For the first time in decades, Deicide sounds dangerous, and man is that refreshing to say.  It's a concise blast of explosive riffage from guys who were there when it all started, and somehow, against all odds, they've re-lit the fire and burned down most of their peers.