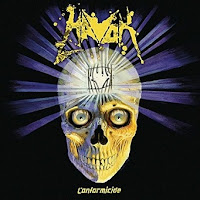 Well, like Twilight Force's sophomore album last year (I'm still refusing to type that idiotic title as much as possible), Havok's new album, Conformicide, seems to already be 2017's bizarre hill to die on.  Though this time, it's not because the frantic hyperbole is focusing on the music itself and the merits thereof (since Twilight Force is basically bombastic flower metal cranked up to eleven most of the critique from both angles seemed to center on whether the style itself was inherently awesome or shitty), instead the controversy from this one stems mostly from the lyrics, themes, and attitude of the band as a collective and individuals.

I'm just gonna get it out of the way since that's what everybody is talking about.  Yes, the lyrics are awful, blunt force trauma rantings of the tinfoil Infowars variety with no subtlety whatsoever.  Yes, they do detract from the overall package.  Yes, Sanchez has made a name for himself for being a ranting Tea Party following, Gadsden Flag waving zealot with a condescending attitude.  Yes, these are all problems that do keep me from enjoying this album fully, but I'll try not to spend too much time on them since I've always been the type to not take lyrics into account too horribly much when it comes to metal anyway.  The biggest problem is twofold actually, the first thing being that the attitude the album exudes is that it's merely a vehicle to preach.  Havok uses their new album as a bully pulpit to talk down to the "sheep" of the "masses" about all the New World Order shit we've been hearing for decades in thrash.  The second is that they don't actually say anything interesting with this platform.  Like, "F.P.C." is all about how political correctness is stifling free speech and how the "snowflake" type youths are ruining everything, but it provides precisely zero examples of such a thing and just rants aimlessly about how much it sucks to get yelled at for being mean.  "Intention to Deceive" starts with an awful snippet of a news anchor announcing that tonight's news will be trivial nonsense to distract you from what's really happening, but the rest of the song conspicuously fails to mention what the news is distracting you from.  It's like the band is trying to come off as a Dale Gribble type character, espousing all kinds of wacky, out-there theories of what is going on behind the scenes when it comes to the people in power, with all kinds of reasons they want to suppress free thought and how they go about it.  Instead they're more of a Steven Hyde, a burnout loser who sits in the basement all day smoking weed and rambling about how The Man is trying to keep you down, maaan.  It's just empty crap, it's the same content you could get from asking any 14 year old in a Led Zeppelin shirt what he thinks is going on in the world.  Just worthless drivel, and being advertised as a forward-thinking album loaded with "truth bombs" is overselling it to a massive degree.

However, I'd be a total hypocrite if I got so hung up on this that I let it ruin the whole album for me.  It's fine if it does for you, but I'm the guy who gave Arghoslent a free pass simply because I love the music so much, so that's where it's going to end for me.

Musically... well it doesn't actually do a whole lot to excite me.  There are some elements that I flat out adore, namely this completely fucking manic approach to vocals that Sanchez seems to have adopted.  I haven't kept up with Havok since their first album since they were just another face in the crowd of rethrash in the late 00s, but god damn I don't remember his vocals being so ludicrously venomous on Burn.  He seems to alternate between that distorted scream and the more conventional snarl, but the former is what stands out and what seems to be utilized more often.  It honestly makes up for a good chunk of the album's faults in my eyes, there's a lot of passion behind those frenzied shrieks, and it helps amp up the aggression when the riffs are stuck in stock meandering mode.  If the riff writing could improve, I could absolutely see Havok being a true standout in the scene, but as it stands the fiendish screams are merely the one thing that makes this album memorable from a musical perspective for me.

Riffs are the lifeblood that keeps the thrash beast mobile, and I won't lie and say there aren't some cool high octane sections on display, but the bulk of the album seems to fall into the same rethrash tropes we've heard a gorillion times for the last decade now.  Now don't get me wrong, there are certainly parts that are creative.  "F.P.C." has a bizarre verse riff that focuses on a Prong styled bass-driven groove, and there are a lot of extended intros (a neat thing that I actually wish more bands would do well), but overall the album focuses on standard thrash rhythms.  This can work just fine, a unique sound is more of a bonus than a requirement to me, but when the passion and aggression is 100% put behind the vocals, the rest of the music suffers.  Basically the point here is that they needed more songs like "Dogmaniacal", which is just fucking ferocious and propulsive, and a whole lot less songs like "Peace is in Pieces", which chugs along and rips out high speed thrash riffs that sound like they were written on the fly and not tweaked at all after the rough draft stage.  Conformicide is deceptively technical as well, with plenty of neat bass licks and complex sections that appear from time to time, but it's not the band's strength.  They're not the brainiac engineers of Watchtower or Coroner who can get Doom to run on anything with an electrical current, but they're competent enough code monkeys to fix my laptop when I download the wrong porn.  The problem is that they don't weave these angular riffs into instantly recognizable anthems like Megadeth did on Rust in Peace (an album this was compared to during the marketing blitz), instead we get ten run of the mill thrash songs that occasionally surprise you with a highly complicated bass run.  I'd call that a failure of songwriting, personally, because the cool ideas they obviously had are overshadowed by the simpler songs like "Claiming Certainty" and "Dogmaniacal".  The Megadeth influence is certainly there, but Havok are still very clearly imitators more than they are trailblazers.

That's really all there is to say about Conformicide.  All around the internet it's either being praised as the thinking man's answer to the overwhelming wave of progressive left wing ideals in metal or a hackneyed vehicle to condescendingly preach to the choir and willingly alienate everybody else, when really it's just a subpar-to-middling thrash album with notable lyrical themes and shit actual lyrics.  It's not awful, this doesn't pain me to listen to and I'll probably reach back for a song or two every now and again, but it's still very full of itself and presents itself as something much grander than it actually is.  Like with all things, the truth is somewhere in the middle, and I'm not just trying to be a oh-lets-just-please-everybody waffler with that statement.  It's just... kinda there.  If there wasn't so much controversy around the lyrics, it'd likely be quickly lost to time as yet another modern thrash album that isn't as shitnards bonkers as Vektor or viciously brutal as Power Trip, apparently the only other two thrash bands people like nowadays.