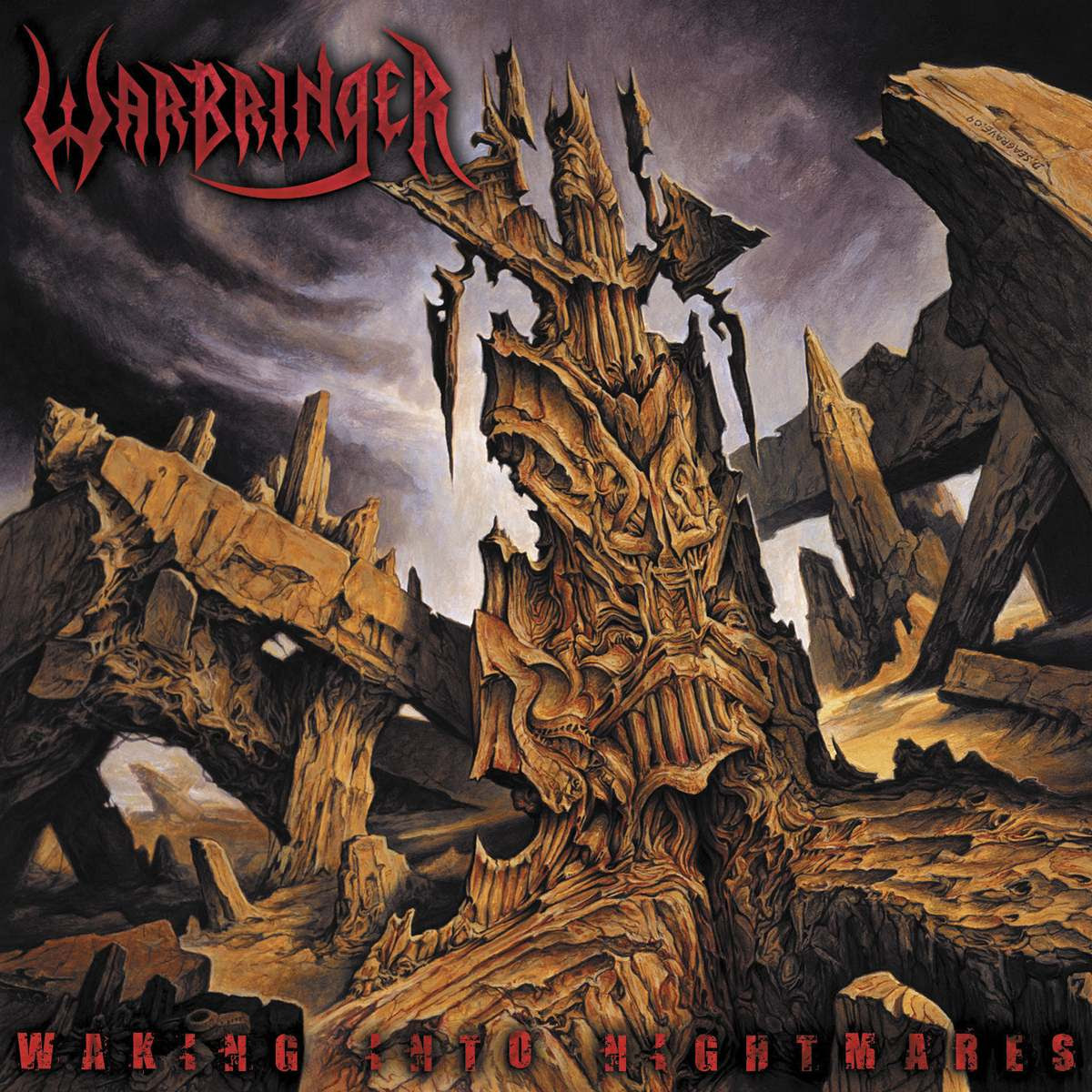 On the right track it seems...

Expectations weren't set particularly high for Warbringer's sophomore effort, Waking into Nightmares, in my camp.  War Without End was okay the first time, but held absolutely no lasting value and isn't even fun for a romp nearly three years later.  It happened, they got exposure, put on a killer live show and garnered a strong fanbase.  I'll be the first to admit, Warbringer puts on one hell of a show.  Their youthful enthusiasm for their craft is rivaled only be the mighty Diamond Plate, and it really shows when on stage (which is ALL THE DAMN TIME.  I swear they were on every remotely thrash tour for at least two and a half solid years).  It's just unfortunate that the studio effort fell flat in fully capturing that energy and in turn brought light on the unoriginal thrash that they actually played.

Every problem has been addressed with Waking into Nightmares.  The production has been cleaned up and presents one of the better (and most fitting) jobs in modern thrash, the songwriting is more interesting, the band seems more energetic, and everything on the whole just sounds more akin to their famous live show.   The energy is conveyed so well on this record that it can actually be difficult to fight the urge to get up and engage in sweaty man bumping when tracks like the ode to the aforementioned mosh pit, "Living in a Whirlwind", start shredding through your speakers.  Riff wise, they still aren't the freshest chips in the pantry, but they're the best flavor so it really isn't all that worrisome to indulge yourself regardless.  These kids still love the early borderline death metal thrash bands like Slayer and Demolition Hammer, and as such still continue to flatter them by consistently taking cues and borrowing ideas, but they're done in such a way that it's neither thievery nor laziness.  It also helps that they're lighter than the aforementioned bands, emulating them mostly through tempo and attitude.  Tracks like "Scorched Earth" and "Prey for Death" carry a more second-tier bay area vibe ala Testament or Exodus, while tracks like "Abandoned by Time" and "Shadow from the Tomb" fill themselves with double bass and riffs possibly taken straight from Reign in Blood b-sides.  The latter pairing actually ends up being a far better pairing simply because Warbringer is better at taking heaps of influence from Slayer than Testament in the riff department.  Now on the flipside, their leads and solos take much more melodic cues, akin to those of the very same second tier California acts whose riffs they aren't all that good at lifting.

Earlier, I mentioned Demolition Hammer, a much smaller name in comparison to the other two bands I've mainly used for comparison, and one may be wondering where that comparison comes from.  Simply put, John Kevill must have had Tortured Existence on repeat outside of his crib as an infant, because he grew up to have a voice nearly indistinguishable from the one found on Demolition Hammer's first two records.  This isn't even close to a bad thing, considering the vicious snarl is just as awesome in 2009 as it was twenty years ago.  The hoarse barks work extremely well with the melodic Slayer mishmash underneath, and any other style of vocals would just feel out of place.  The songwriting itself is actually fairly diverse despite heavily taking every cue from a whole two different bands.  "Jackal", "Severed Reality", and "Forgotten Dead" are rip roaring thrash numbers that take an equal amount of prisoners as they do shit (hint: it's none), "Shadows from the Tomb", "Senseless Life" and "Abandoned by Time" really harken to Slayer's mid eighties heyday of brutality with an early proto-death edge, and there's even a mellowish instrumental interlude in "Nightmare Anatomy".

I'd say there's something for everybody here, but that isn't quite the truth.  Despite the surprising variety and overall energy, everything still basically boils down to this sounding like a super group with Kerry King writing the riffs, Alex Skolnik writing the solos, Dave Lombardo behind the kit, and Steve Reilly on the mic.  While that basically sounds like a dream band, it does tend to borrow a little too heavily from the source material.  On the whole though, these kids have their hearts in the right place and will probably continue to produce legit thrash metal long after this retro resurgence dies out.  Time will only tell if Waking into Nightmares was a fluke, but for now I'm gonna give them the benefit of the doubt and say they're just maturing and will continue to improve.