Destroyers of All - The Vile Manifesto 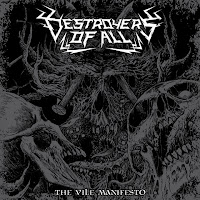 The riff at 2:45 in "False Idols" is the main riff from Blue Oyster Cult's "Godzilla"

I'll admit that I fell victim to "cover judging" here a bit, coming across a band tagged on MA as "Progressive Death/Groove Metal" with a logo by Christoph Spzizijaizjidel and cover art by Mark Riddick just screamed "riffless modern wank with all pomp and no substance", and I was pleasantly surprised to find out that that wasn't really true.  There's no doubt that this falls into the usual trappings of modern death/thrash by being consistently intense with less standout highlights than I would like, but the fact that I just referred to them as death/thrash instead of the visual eardrum-repellent of a genre tag previously stated should tell you that these Portuguese metalloids are about to make defying expectations something of the norm here.

Yeah, Destroyers of All adds a bit of everything to the pot, touching on death, black, thrash, prog, groove, and metalcore with a surprisingly deft touch.  I think the base of the music lands on the line between death and thrash metal most often, while the other bits are just window dressing that get center stage quite rarely, only taking hold in brief snippets here and there, but these dudes are pretty damn good at making it all sound natural so it never really comes off as jarring.  Take a track like "Destination: Unknown".  It opens on a thrash riff reminiscent of something like modern Testament, followed by  high speed blasts of Goatwhore-esque tremolo filled black/death intensity punctuated with staccato dissonance, broken up by a more overt whirlwind of a thrash riff that calls to mind one of the more technically frenetic legends like Destruction, which precedes a blazing solo that climaxes on a Metallica-cum-Lamb of God riff, before breaking into a vaguely Latin American inspired acoustic jaunt, and again pulling back around to the catchy death/thrash of a verse riff that I glossed over earlier.  It sounds like a total mess on paper, I'll admit, but it comes off so fucking naturally that I didn't even notice how wildly disparate each individual section truly is until the sixth or so listen.

What this truly reminds me of is a more musically adventurous throwback to Deathchain's peak in the mid 2000s, or alternatively a more streamlined and catchy Satyrasis.  While there aren't too many songs I can immediately point to as obvious highlights, there are plenty of individual sections that completely rock my shit.  There's the gang vocal "HAIL TO THE EMPEROR" shout in "Tohu Wa-Bohu", the quiet middle eastern break that leads into a devastating chug riff on "The Elephant's Foot", the dexterous breakdown that opens "Sheol", the punk-infused venom of "Kill the Preacher", the immaculately infectious verses of "Destination: Unknown", there are a ton of moments to like.  The only real flaw of the album is that "Ashmedai" and "The Dead Valley" are just sorta inconsequential when compared to the whizbang pyrotechnics of the rest of the tracks.  Most of the best moments are found in the first few tracks, but I'd be doing the album a disservice if I implied that it got worse as it went on, because it really doesn't.  I think the anarchic lunacy just starts to wear on you a bit once you're approaching the 35th minute and being pummeled with your 600th riff, and hell if anything I see that as an endorsement of how fucking wild The Vile Manifesto is.

A fiery goulash of pretty much every extreme metal subgenre being thrown at you from twenty angles might be overwhelming to some, but as one of the writers behind The Outer RIM I think it'd be unsurprising to most people to find out that I don't care one iota about the frantic pulling of several genres, and even then it's rather palatable considering I've made more cohesive culinary references up to this point.  It's all very well blended into one continuously complementary flavor palette, as opposed to a trail mix effect where each bite could contain wholly different ingredients and taste wildly different depending on where you reach.  The base of death/thrash is strong enough to tie the room together.  Despite me mentioning the lack of true highlights when songs are taken as a whole, it's really kind of misleading because it's all presented as one continuous conga line of riffs and hooks, so the semi-arbitrary cutoffs regarding where each track begins and ends results in the whole album being a cyclone of entertainment.