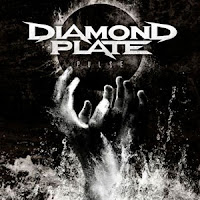 That's going to bleed when my heart beats

I'm not going into the history of the band this time, you all know it.  I loved Diamond Plate when they were furiously angry yet surprisingly sophisticated kids, and hated what they produced once they were signed to a major label and started homogenizing.  The point is that Pulse here is the logical continuation of what was found on Generation Why? two years prior.  It's still loaded down with that modern sheen, there are still a handful of moments that are surprisingly great, and it's more proggy and bloated with ideas that don't really work.  Pulse is, more than anything else, a very awkward and confused album from a band that's clearly in transition.

The main problem here is that this is clearly an album that's trying so hard to not be a thrash album, but at the same time trying so hard to retain the fans that fell in love with the band precisely because they were so good at thrash.  It's confused, pulling in several different directions at once, and as such there's pretty much no identity at all and everything comes off as forced and awkward.  The two tracks that approach and breach the six minute mark ("Still Dreaming" and "Rainmaker") are the only two places the band seems to sound confident in what they're doing, and they're both slower, more progressive-yet-stripped down affairs that call to mind the gloominess of Alice in Chains more than the high-octane "Megadeth meets Destruction" riffage they cranked out in alarming volume on the Relativity EP.  They both feature the new vocalist's clean vocals, which are lightyears better than his hilariously strained and forced snarl that permeate most of the songs.  They have a much more calm and alternative bent to them, and it just sounds so much more natural than his awful screeches.  I know they gave Jon Macak the boot for this guy and a lot of people seemed happy about it at the time for some reason, but I never bought it.  Jon didn't have a phenomenal voice or anything but he fit the wild-haired lunacy of the riffs wonderfully, and weak link though he may have been, he was still strong (which spoke to the staggeringly high quality of the band as a unit at the time).  Matt Ares on the other hand has a pretty good clean voice and a fucking awful harsh one, and the harsh vocals are still the most present on the album, not to mention his croak is going to be slathered all over the old songs live, so it was absolutely a downgrade for sure.  Unless the future of this band is to abandon thrash and anything approaching aggressive music ever again, he has to be one of the cruddiest choices imaginable.

And in all honesty, despite me loving their thrash work so much, their modern "we're for smart people now" approach seems to be the only way the band can truly evolve and come into their own.  Because most of the album still tries to carry some sort of metal attitude and swagger, and it just falls flat.  The opener, "Walking Backwards" stands as an exception, because it's the clear highlight of the album for me.  This is what they do best, hammer-wristed havoc and headbanging fervor with light tinges of melody and a modern twist on classic thrash.  The vocals are obviously sorta blech but the rest of the song does a pretty good job of reminding me why I liked the band in the first place, with a couple curveballs in the form of great grooves and an awesome guitar solo.  Everything else?  Not so much.  "Dance with Reality" is a complete nothing-song, and tracks like "Price You Pay" and "Running Dry" just flash past you with utterly zero consequence.  There aren't any riffs that just pummel you into submission like "At the Mountains of Madness" or "Criminal Justice" to be found here, instead replaced by simple chugs and rapid fire riggedyraka rhythms.  "All of It", for example, actually has a pretty cool Megadeth style chorus riff hidden behind an extremely bland early 90s Metallica style vocal line, but the rest of the song sounds like it's on autopilot.  Even the percussion, which used to do a pretty good job of standing out over the guitar's flashy theatrics, is relegated mostly to simple rhythm keeping beats and the occasional jazzy flair that doesn't fit at all.  I will give some credit to "Face to Face" though, as I love the structuring of it, starting off so calm and subdued and subtly building and building and building until the end of the song where it's just an all out frenzy.  The band sounds like they're coming apart at the seams there, and it sounds great.

Overall, despite a couple cool moments, Pulse is very much a "why bother?" album.  As it stands, it's clearly the band's low point, and on the off chance they keep on trucking for the next thirty years and craft a storied career, this is going to be remembered as the awkward transition album that didn't really work, like a hypothetical album that tried to blend Killers and Number of the Beast and just landed on the worst of both worlds.  "Rainmaker" stands out because it's the type of gloomy half-ballad dominated by clean vocals that I can see the band making work in the future, but even then it's kinda half-baked and doesn't sound fully developed.  They have a lot of growing to go, and I don't really like the direction they're going personally, but if they put out an album that sounds like a fully realized blend of modern Alice in Chains and Dead Heart in a Dead World era Nevermore, I could see them finding an audience and having a real identity.  And honestly, I'd rather a band suck at something I don't care for but at least sound like they're confident and happy with what they're doing than drop a half hearted slog of boring nothing-songs that can't figure out if they want to let loose or not.  Not recommended, especially to early fans of the band that saw them playing to thirty friends from school in a dingy club.  Because the people that latched on to them during that time are going to be sorely disappointed.  This isn't the same Diamond Plate from 2008, and it's time to accept that.