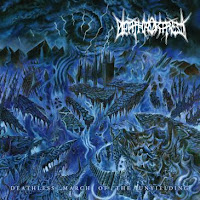 Longtime readers of mine have probably noticed that I don't cover a whole lot of black metal.  It's not because I don't like the style or anything, I'm just bad at writing about it.  I have the niches I love (from the blisteringly hateful like Infernal War's Redesekration and 1349's Hellfire, to the more traditionally hypnotic and atmospheric classics like Darkthrone's Under a Funeral Moon and Burzum's Hvis Lyset Tar Oss), but my thesaurus of musical bullshittery doesn't extent much further than death metal.  So forgive me for putting this bluntly, but Death Fortress's Deathless March of the Unyielding is fucking rad.

I've seen reviews scattered around the internet for these Jersey Boys' debut LP, Among the Ranks of the Unconquerable, and a lot of people seem to praise the band's atmospheric approach to black metal.  If that's the case, then Deathless March of the Unyielding here must be a pretty notable shift in style, because the atmosphere here remains present but takes a back seat to seething vitriol and pummeling riffage.  This borders on black/death at several points, most notably on the first side of the album, with tracks like "Enthroning the Oppresor" and "Scourge of Aeons" coming dangerously close to sounding like a much more black-leaning interpretation of modern Behemoth, and the nonstop intensity is the main reason why.  This shit doesn't let up for a second, right from the word "go" they proceed to just rend the entire universe asunder with twisted, malevolent riffs and manic percussion.  That's the main thing I take away from this album, it carries itself with such forward momentum that there is pretty much no room at all to breathe, and that's a plus for a guy who usually spends his time with punishing brutality in death metal.  The overwhelming oppression can get to be a bit much I admit, with there being relatively few standout moments instead acting as one overarching unit, but that really just means that the album nails what it's aiming for, so I can't fault it for being good at what it does.

The 10+ minute title track that closes out the album does stand out though, albeit for different reasons.  This is the one time the band takes their foot off the gas, but the bubbling hatred still overflows.  Lower vocals are utilized here, and the band takes on a much more doom-laden tone.  The riffs churn and crunch their way through a spiral walk down hellish landscapes, taking on an almost tribal, ritualistic atmosphere.  It's very epic, and it's nice to hear a band that spent the previous half hour mercilessly bludgeoning me into oblivion craft a much slower and more sinister brand of black metal to cap off the experience.  It shows that Death Fortress are extremely skilled at everything they try to do, and this wide variance of ideas that all work marvelously showcases a band of professionals spreading their wings and dominating everything they set their mind to.

I just want to point out that it's at this point in the review I actually looked up the personnel behind the band and realized the guitarist and bassist are the two guys from Dethroned Emperor and the drummer played in both Disma and Funebrarum, so all that death metal influence I picked up while listening to this makes complete sense and my ear for extreme metal is just as sharp as always, I deserve a fucking cookie.

Deathless March of the Unyielding is absolutely crushing, and the vehement, blistering anger and hatred permeates every note.  I'm not about to sit back and call it a modern masterpiece, but there isn't a whole lot I dislike about it.  Death Fortress delivers a half hour of oppressive, punishing atmosphere with a massive undercurrent of barbarianesque power that decimates everything in front of it, before ending on a ten minute blackened dirge of hellish, Junji Ito proportions.  People smarter than I have compared them to Swedish legends Sacramentum, but if I'm being totally honest I've never actually listened to Sacramentum so you'll just have to take my second-hand word for it.  The point is that this album absolutely rules, and I'm glad I heard it.  It's not going to be winning Album of the Year or anything but it will certainly contend on a lot of peoples' lists as long as they get enough exposure.  And with songwriting skills like theirs, that shouldn't be a problem.