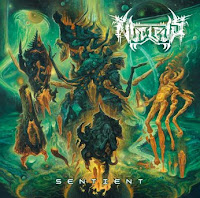 We all know I have a somewhat biased view of any Chicago bands out of silly hometown pride, and we also know that I seem to have been following Dan Ozcanli for a while now (it's seriously just coincidence, but considering I've touched on Splatter Control, Clocktower, and Smash Potater (where he doesn't play with the band, but if you're an insider you know he has a very strong connection), it really does seem like I can't escape this guy), so it was only a matter of time before I truly gave Nucleus their time in the spotlight.  With this first LP debuting on Unspeakable Axe, the sister label of the utterly ubiquitous Dark Descent, and being adorned with art inked by the legendary Dan Seagrave, in addition to this being by far the most mature and sophisticated band he's played in, it's obviously primed to be the best of the bunch.

Suffice to say, it is.  But with that said, there are some issues here that I just can't shake.

First off, I'm being somewhat misleading with that opening paragraph.  I seem to keep bumping into Dan but none of those projects were necessarily his, and this is no exception.  Nucleus is more or less the brainchild of frontman and runner up in the 2016 Having the Same Name as a Legendary Metal Musician contest, Dave Muntean.  For as well written and brutal as Sentient is, the band's youth is readily apparent upon even the first listen.  What I mean is that Muntean (and the band as a whole, obviously) clearly worships at the altars of the lesser known death metal icons like Demilich, Nocturnus, and Timeghoul.  The influences here are so strong that they tend to come off as a band wishing to emulate those forgotten classics, and as such get somewhat lost in the glut of the sixteen squintillion bands doing the exact same thing nowadays.  Dark Descent is notorious for their tendency to release twisted, cavernous, and ethereal death metal, and all of those descriptors fit Nucleus just as well as any band on DDR or (to a lesser extent) Unspeakable Axe.  That's not to say this is a bad album or anything, it's more to say that if it wasn't for the immediately eye catching art (another personal bias, I love softer colors in my extreme art) and the fact that they have my hometown bias working in their favor, there's like a 20% chance I would have ever bothered checking them out in the first place.

Now, they're not unoriginal coattail riders, that much should be obvious, but it's a problem nonetheless, however small.  Despite that, there are a lot of standout sections to be found on Sentient.  "Cube" rides on a monolithic and maddeningly infectious main riff, and "Swarm" has one of the most massively punishing breaks on the entire album.  In fact, Nucleus seems to go against the grain of my normal taste, since the fast blasting parts tend to fade into the white noise from time to time, but the more pummeling slow sections bludgeon me into dust.  The aforementioned "Swarm" is easily the most effective, but the opening riff of "Ancient" and the whole of "Extirpate" hit the spot just as hard.  These times when they evoke the twisted morbidity of Morbid Angel and Timeghoul are the easy standouts of the album for me, as the guitar tone is bigger than Troy Aikman's hands and the vocals sound like the audial representation of Galactus, so these more atmospheric moments when these elements have room to breathe leave the listener no choice but to be squashed into submission.  It's little moments like those that show the amount of songwriting prowess the band truly commands when they set their minds to it.  Their riffs are obviously top notch, but those more simplistic chugs and pounds are where they really shine.

But like I said back up there, there are a lot of moments that call to mind their obvious influences.  There are a lot of moments that sound like Timeghoul and Demilich, but not a whole lot of moments that sound like Nucleus, if that makes sense.  A lot of reviews around the internet seem to be a bit confused as to what they actually play, with some placing them within the ranks of the early definition of tech death like Nocturnus, and others likening them to the demonically malformed Finnish bands like Demilich and Wombbath.  The truth is, like with most things, somewhere in the middle, which lends itself to sounding like both of those scenes (essentially a Scandinavian manifestation of Suffocation with a healthy dose of the Steve Tucker era of Morbid Angel), and this isn't necessarily a bad thing.  All of the bands I find myself comparing them to are indeed classic bands, so they're in good company.  In all honesty, I don't tend to look towards a band's future all that often, but I can see them being the type of band who really pulls it together on the sophomore effort.  I mean, Decrepit Birth's first album was essentially just a Suffocation clone, but Diminishing Between Worlds really established their own unique melodic take on tech death.  I can see the second Nucleus album really refining the things that work and carving out a more distinct name for themselves.  With the more midpaced and slower sections really standing out more than the fairly by-the-numbers fast parts and the massive voice behind the mic, I'd say they definitely have the ingredients to spice things up more in the future.  But as it stands, they're more of a Demented Ted than a Revenant.  Regardless of the minor identity crisis, Sentient is a beefy slab of old school death metal that should at least be given a chance by any fan of the genre.  I certainly like it a hell of a lot more than I anticipated.  The fact that I'm finding myself picking out all of these positive moments in a modern scene that normally reduces me to involuntary yawning should mean something.

Seriously, listen to "Swarm" and "Cube" at the very least, they absolutely decimate.