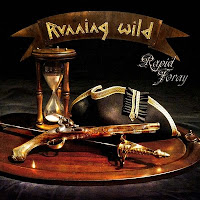 I planned on not even touching this, I had no reason to ever do such a thing at this point.  We know how much Running Wild has sucked for almost twenty years, right?  Yeah I'm just gonna skip the preamble and say this is as close to a return to form we're probably ever going to get, but it's still a huge breath of fresh air for the long suffering fans of the band's glory years.

Some of the quibbles that have been plaguing the band ever since the "reformation" (because you and I both know damn well this is just a Rolf Kasparek solo project accompanied by a yes-man and a long deceased anonymous drummer that every single human in the universe knows is a damned drum machine) are still here.  Rolf's ancient voice is still floundering in a dry environment in dire need of reverb to cover up his weird snarl (though the more prominent layering and generally stronger choruses certainly help here), the guitar tone is still mechanical and "steely", for lack of a better term, the drums are still an uninspired program milking three beats into oblivion, and all the best parts are still lifted almost note for note from previous classics.  But despite all of these problems, Rolf is spending more time ripping off classic albums like Pile of Skulls and Black Hand Inn instead of The Brotherhood.  The abundance of lame cock rock songs have been shaved down dramatically, with only a few here to really stink up the joint, and even then a good chunk of them are actually some pretty entertaining tunes.  For example, "Stick to Your Guns" should be the exact kind of song I loathe from a surface perspective, but it's more well written than something like "Me and the Boys" or "Down to the Wire".  It sounds like a lost AC/DC tune from their stadium filling days, instead of a weak filler track on a 70s KISS album like every other rock song he's penned since the turn of the century.  "By the Blood in Your Heart" calls to mind something like "Uaschitschun" or "March On", or even one of Judas Priest's lesser anthems like "United" or "Take On the World". But, like "Stick to Your Guns", it just works somehow.  The utterly incessant ohrwurm of the chorus is a pretty large reason for that.

But really, those aren't the main draws of any Running Wild album.  "Fight the Fire of Hate" will always pale in comparison to "The Phantom of Black Hand Hill", and that's no different here, since the more metallic and speedy numbers that hearken back to their halcyon years are the best songs here by a galactic mile.  "Black Bart" was chosen as an advance single, and that was possibly the smartest thing anybody could have done to promote the album, since it sounds straight out of Pile of Skulls.  Granted, part of that is because it's so similar to "Jennings' Revenge", but that doesn't bother me since that's one of their unsung classics of the era.  The song is filled to the gills with those glorious nautical melodies that were the band's bread and butter from 87-02.  Quick tremolo melodies and sharp triplets make up the lion's share of the music on the track, and every little quirk present is just so indicative of what used to make them so great that it stands head and shoulders above literally everything Rolf has released since Victory (with the obvious exception of "Libertalia", which was basically a lost Blazon Stone song burrowed away as a bonus track on their worst album).  The major scale melody immediately following the solo, the catchiest chorus he's written since "Pirate Song", everything here is great, and any Running Wild fan worth their salt will find themselves enthralled with the track from the opening seconds.

While "Black Bart" stands as the obvious highlight, several other songs are littered with golden moments as well.  "Warmongers" uses the main riff from "Black Hand Inn", and it works just as well 22 years later.  Songs like "Black Skies, Red Flag" and "Hellectrified" are much more in line with traditional heavy metal than the speed metal monsters of "Black Bart" and "Blood Moon Rising" (which, like all the other good songs here, reminds me of a previous classic, this one being "Lions of the Sea"), but they're very strong regardless. The signature closing epic, "Last of the Mohicans" works extremely well too.  It, like "Bloody Island" before it, just rips off "Treasure Island" with a startling lack of restraint, but god dammit it works.  I don't know if it's just the fanboy in me hearing familiar sounds and instantly latching on after years and years of every new release being worse than the one previous, but to me it just shows that Rolf is still good at what he used to do and he's simply choosing to do it again.  He's always bordered on self-plagiarism but it's always been well written and endearing enough to not really matter, and that's exactly what's happening here.

It seems like Rolf somehow remembered how to write excellent choruses again, because the only song that fails in that respect, and unsurprisingly ends up as the only song on the album that I can confidently say is just flat out bad, is "Into the West".  The shitness of that song actually almost sours the entire album because it encompasses everything wrong with the drum machine era of RW.  The weak chorus, the uninspired riffs and melodies, the fact that it just inoffensively passes through one ear and flops out of the other, it's almost insulting since it's clearly trying to emulate "Little Big Horn" and it's just completely ineffectual anyway.  It's weird, it doesn't do anything that any other tracks do, but it just doesn't work for me, so take that with a grain of salt.

I'm probably making this sound like it's much better than it actually is, and I'll fully admit that.  Rapid Foray is a solid album but nothing more than that.  There are tons of little moments of brilliance (like the chorus of "Black Bart" or the "whoa-oh oh" parts in the title track) but none of the songs really live up to their predecessors.  It aims for the sound of the early 90s and lands somewhere in the early 00s instead, stuck somewhere between the "solid but not great" The Rivalry and "half great and half fucking terrible" The Brotherhood.  I'm cognizant enough to know that the rose tinted glasses are on with me right now, and tracks like "Blood Moon Rising" and "Hellectrified" will very likely fade from memory in favor of the obvious highlights like "Black Skies, Red Flag", "Black Bart", and "Last of the Mohicans", but for a long time fan, this is exactly the kind of album we were hoping Shadowmaker would have been.  Remember how I said Resilient, despite a more mediocre slog on the whole, was stronger than Shadowmaker purely because it sounded like Rolf was having fun again?  Rapid Foray takes that to the next level, as this is the most energetic and fun-loving collection of songs Running Wild has managed to put together in almost twenty years.  It's not going to be on any year end best-of lists unless you're a dad, oldnoob, or German metal magazine, but it's extraordinarily refreshing to get an even "solid at best" album out of Rolf these days so it's worth a listen regardless.

PS: Yes, he does the thing he always does in like eight of the eleven songs.  Rejoice.
Posted by Bastardhead at 12:17 PM