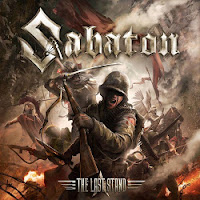 Fun fact: Today is my birthday.

Not so fun fact: I'm spending it reviewing this shitty Sabaton album.

Around eight years ago, I reviewed these Swedes' debut album, Primo Victoria.  It had some potential to be a fun melodic power metal album but was too in love with its own theme to focus on songwriting in any capacity and just transformed the horrors of war into a bouncy Disney rendition of wanton slaughter.  Sabaton is to armed conflict what Alestorm is to the brutal and filthy life of a pirate.  Sugary, toothless nonsense with a slightly left-of-center theme and an instantly recognizable vocalist that helped them stand out a bit.  Well apparently, since then the band promptly blew the fuck up and became one of the hottest things in mainstream metal.  They're headlining 70000 Tons of Metal, co-headlining tours with Nightwish, going platinum in their home country (a completely ludicrous achievement in the era of downloading), they even have their own fucking open air fest if I'm remembering correctly.  Just, somehow, completely out of nowhere, people the world over decided they loved the everloving fuck out of whatever it was Sabaton was producing.  So with that in mind, I decided to finally take the plunge and listen to their newest album, The Last Stand, my first since their debut.

Holy Christ this is bad.

When people trash Battle Beast for being a metal band with a pop heart that tries desperately to break through and renders their songs unlistenable trash, I imagine they're accidentally listening to Sabaton and not realizing it.  Because THIS is a pure pop album with distorted guitars and a gruff vocalist being the only things to make it identifiable as metal.  In terms of structuring (every song is within the 3 minute range, barring the opener, "Sparta", which only breaches four minutes because of a pointless intro), the focus of catchiness over everything else, the sugary keyboards, the bouncy melodies and vocal inflections, everything about this might as well be fucking ABBA.  Now, I am a Battle Beast fan, so I don't have a problem with keyboard heavy pop metal on principle, but at least those Finns occasionally rip out a song like "Fight, Kill, Die" or just make the hooks so infectious that nothing else matters (like "Out of Control", "Black Ninja", "Out on the Streets", etc).  Sabaton manages none of that, as there is a grand total of one song where the hook is good enough to stand out in anyway (that song being "Shiroyama"), and one other song where the metal roots break through for a startlingly brief period of time (the admittedly awesome bridge in "Hill 3234"), the rest is pure 80s cheese with zero charisma.  Just very plastic, lifeless sounds pumped out on a production line.

I think the most insulting thing about the album is that it's not even offensive in how shit it is.  The album blurs by in what feels like a matter of minutes.  Every song is utterly inconsequential and has no chance of sticking with you in any way.  They're meaningless fluff pieces meant to crank out an album and go back on tour and just leave it at that.  I'm having trouble even pointing out individual songs to explain what's wrong with them because they all blur past so quickly with so little thought put into them.  I suppose "Sparta" is a little different thanks to the slower, more martial backbone and the HOO! HAH! shouts, but that's about it, and that very well could be purely a result of it being the first track on the album, so my interest hasn't completely drifted off towards some other such nonsense quite yet.  Everything else just... happens.  It's all so phony and effortless, it's a shameless nothing-album.

The keys themselves deserve special mention, because I can't remember the last time I heard a keyboard tone so offensively crappy.  They're very plasticky and shiny, not unlike a Fisher-Price toy from a Wal Mart shelf.  It's bad enough that the songs are nothing but lazily written conveyor-belt pop songs, but shoving this weak ass tone to the forefront to carry every melody and compliment every vocal line in every chorus is just blisteringly stupid.  It's especially bad on songs like "Winged Hussars" and "The Battle of Bannockburn", where they're just so fucking in-your-face and almost arrogant in how prominent they are.

It's worth noting that I was about to compare the songs to Reinxeed's sugary pointlessness in that last paragraph, and just realized that, while he doesn't play on this album, Tommy Johanssen is actually the newest member of the band, so I rule.

I really can't even bring myself to write anymore, I've already put more effort into this review than they did writing half of the songs.  The Last Stand is a safe and effortless pop metal album with absolutely nothing helping it stand out other than the war theme and gruff vocalist.  Everything else is weak.  Hell, I'm even open to the idea that the hook for "Shiroyama" isn't even that great the only reason I like it is because my interest in Japanese history caused me to hear the line "It's the last stand of the samurai" and wonder aloud "Huh, is this a song about Shiroyama?" before I realized the name of the track.  Apparently I haven't been missing much by ignoring Sabaton for the better part of the last decade, I can only hope the rest of the world catches on and abandons them as well.

Happy fucking birthday to me.