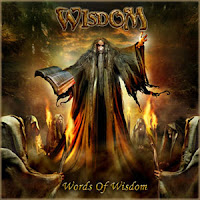 Hungarian born power metallers, Wisdom, are an extremely frustrating while at the same time supremely satisfying group of fellows.  On one hand, they're one of the most generic and cookie cutter power metal bands to ever grace the planet.  Basically each and every song they've ever written has followed every cliche laid down by genre progenitors like Helloween, Hammerfall, and Sonata Arctica.  You listen to any given album and you know exactly what you're going to get, almost down to which melodies will appear and which songs will be the more aggressive one based purely on song titles.  On the other hand, they are bubbling over with songwriting talent that renders their reliance on heavy handed cliches relatively moot.  Their 2013 opus, Marching for Liberty is one of the more finely crafted works of art in terms of catchy replayability in all of modern power metal, eschewing grandiloquent orchestrations in favor of a meat-and-potatoes style of muscle bound riffage underneath an immaculate sheen and pristine vocal performance.  The predecessor, Judas, is no slouch either, replete with some of the catchiest numbers they'd ever pen (and even the happiest song about Silent Hill ever recorded).

Unfortunately, this review is for neither of those two albums.  Their debut is nothing more than adequate in the grand scheme of things.  While on the surface it isn't much different from what they'd release in the past, it stands as something of a disappointment from two different angles.  In the moment, it's a solid and respectable effort by a hungry young band, but it relies so much on the crutches of the genre that very little stands out in any way.  Yet when looked at through the scope of the present day, it's a weak listen because their skill is showcased so superbly on later records.  As such, Words of Wisdom stands as a bland, faceless power metal album apart from the odd song or two.

"Holy Vagabond" is a phenomenal song, with a chorus that'll incessantly worm its way into your skull and refuse to leave until you listen to it several times in a row, which quickly reveals itself as the band's biggest strength. What they lack in great vocals or flashy guitar playing, they make up for with an ear for melody on par with greats like Blind Guardian and Running Wild.  Most songs on the album are a flash of white noise occasionally punctuated by a stunningly crafty chorus.  It may have something to do with the vocalist being exposed as fairly weak and faceless during verses when he's singing solo, but when he's layered over himself a bunch of times it stands out as being much more powerful and entertaining.  Thankfully, the benefit of hindsight shows the growing pains of his rookie season, as he will only improve from this point forwards.  I don't mean to imply that Words of Wisdom is softened simply because of how good Marching for Liberty is, it's more that it's just highlighting all of the band's potential as initial weaknesses.  There's clearly room to develop here, as the songwriting is strong, cliche as it may be.  So the silky smooth vocals end up distractingly lame on this album, and the unimaginative percussion and stock riffs do nothing to help this stand out on the merits of the playing itself.

The band's real strength lies in their songwriting skills, as mentioned.  "Holy Vagabond" would be a concert staple if it was penned by Helloween (and let's be real, it might as well be), "Wisdom" carries an ohrwurm of a chorus, "Wheels of the War" stands out as being the most aggressive song on display, with a blazing fast and startlingly heavy verse riff and some cool viking styled war chants in the chorus, et cetera et cetera.  The problem is that any power metal fan who's heard more than three of the classic bands has heard all of these songs before.  Most of them are good songs at the very least (barring "Unholy Ghost", being the obligatory awful ballad that basically every power metal band seems determined to shoehorn into every album), so it's a fun listen every once in a while, it's just not anything you'll ever be itching to hear beyond "Holy Vagabond".  They can do much better, Judas and Marching for Liberty show that in spades.  Basically Words of Wisdom is an unrefined and sketchy album that has strengths in places, but overall is pretty bland.  I like the band plenty, but this is solidly and indisputably their weakest album.