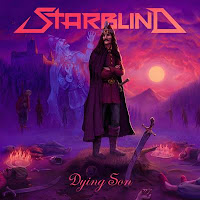 To dig into Starblind, I need to call back two of my previous reviews referencing flawed but enjoyable power metal bands, Lancer and Athena.  I railed against both for several things, including weak vocals, bad production, recycled ideas, and lack of any real identity (less so with Athena, admittedly).  Now, you may also remember that I like both of those albums, with Twilight of Days standing right next to Into the Enchanted Chamber as one of my all time favorite obscure power metal albums.  That's because both of those bands, despite being cliche, silly, and/or dumb, powered through their flaws on the backs of charisma, songwriting talent, and/or just a knack for writing fun, memorable, catchy songs.  "Purple Sky", "Touch My Heart", "Mr. Starlight", "Twilight of Days", "Falling Ghosts", both albums were jam packed with cool tunes that made them vary from listenable to outstanding despite their woes.

Starblind is neither of those bands.

Basically what I mean is that Dying Son exemplifies every negative thing I had to say about both of those albums and yet manages to carry none of the superfluous strengths that redeemed them.  What we have here is bog standard heavy metal with a terrible vocalist, banal songwriting, wretchedly thin production, and the staying power of that zebra stripe gum.  I can hardly elaborate further than that, Starblind is a sentient void of skill that managed to sneakily squeak out an album sometime in 2015.  Nothing is on it, it might as well be blank.

I think my biggest complaint is really the vocalist, who I'm convinced is merely a friend of the band who got a spot in the lineup simply because he was a nice guy with a high voice who let the bassist crash on his couch a few times.  He reminds me of Olof Wikstrand on Enforcer's first album.  Ya know, before he was any good.  He seems to tunelessly wail at the top of his lungs throughout the entire runtime with no regard to what the song seems to be trying to do.  He's completely inept, doing his best screechy Bruce Dickinson impression after listening to The Final Frontier one time.  It's incessant, and it's irritating.  Bad vocals can really ruin any album faster than any other instrument, mostly because it just seems like a weird phenomenon in metal where you'll rarely hear a completely inept guitarist or something, so it always stands out like a pulsating cold sore.  This dude couldn't sing his way out of a grade school talent show, and it taints an already lame album even further.

Musically there's really nothing much to say, it's Piece of Mind era Iron Maiden worship of the most blatant kind, I'm not even sure I can pinpoint another influence on the band.  It's packed to the gills with galloping riffs and dual lead melodies, but none of them stick for longer than it takes to actually play the note.  I've sat here with this document open for like an hour trying to describe the music further than that, but I can't.  It's seriously just Maiden riffs and melodies ripped from the mid 80s and reapplied thirty years later sans any semblance of actual soul, repeated over and over and over again until you're ready to just leave the damn room and do anything else.  You can't just take something great and redo it and expect it to be as good as the original.  This is literally heavy metal fanfiction, and it's exactly as banal as you'd expect it to be.  Even if there were more original ideas present than "none at all", I can't imagine it'd last beyond a cursory listen before being written off for the terribad vocals and wafer thin production.  Just listen to Powerslave instead, because listening to Dying Son is akin to hearing the dude in the apartment next to you listening to that album just loud enough for you to know it's Maiden, but not loud enough for you to pick out any of the actual musical genius hidden behind his terrible singing along and "bloo boodoo bloo boodoo" onomatopoeia of the riffs anyway.