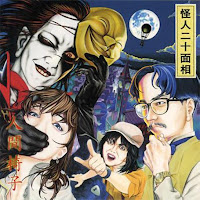 Witty titles are beyond me

Ningen-Isu (named after the extremely disturbing story, The Human Chair (read the Junji Ito manga about it, if you hate sleeping)), has a long and illustrious career that's ended up all but invisible in the grand scheme of things outside of their home country.  This unfortunate invisibility has extended even to me, a fan of bands from Japan that eschew the stereotype of excessively overproduced flower metal and instead take more traditional and extreme forms of metal and twist them with that inimitable oriental flavor (Sigh and Gargoyle being the two most obvious culprits), and as such I'm only truly familiar with the three most recent albums; Shigan Raisan, Mandoro (my favorite of the bunch), and Burai Houjou (though this album has "Namahage", which is their best song of what I've heard).  So with that in mind, I decided to snag a completely random album from some other time in their career, and with that I ended up with 2000's Kaijin Nijuu Mensou.

The base idea of taking Black Sabbath and shifting everything 90 degrees counterclockwise is still the main idea here, with smatterings of 70s hard/prog rock and other assorted influences from all across the board, and it's just as great as their newer stuff.  Ningen-Isu is renowned for a stunning consistency in their work, and I'm starting to understand the praise, as these songs are all varied in their approach, while all focusing on a trench digging groove that bores its way into your psyche and refuses to leave.  Much like Manowar's debut (an obviously entirely different style of band and album), the assorted hard rock influences keep everything upbeat and creative, refusing to rely on the time tested tropes of trad/doom metal like this so easily could have done.  Tracks like "Keimusho Wa Ippai" and "Meitantei Toujou", and the title track have a very distinct 70's classic rock feel to them, while tracks like the absolutely stunning "Daidanen" and "Ashinagagumo" revel in the Vol. 4 era of Sabbathian psychedelic doom hypnosis, and there's even a few curveballs late with "Jigoku Fuukei" being a straight up blitzkrieg of thrash metal and "Tanoshii Natsuyasumi" starting off as a late 70's Judas Priest styled speed metal track before descending into some downright trancelike progressive doom.  The band is positively bursting with fresh ideas at every turn, and there's nothing that they seem to be uncomfortable with.  I feel like this is what truly happens when a band decides to put all of their influences into their music, no matter how diverse.  Instead of a slapdash tossed salad of random dickery, you get tons of creative, flowing, organic songs from all corners of your mind across a decades long career.

I've heard Shinji Wajima, the guitarist and lead vocalist, described as the metal version of Master Roshi.  He's this tiny, frail, goofy old man who hides a monstrous, planet splitting power.  The riffs here may not be as skull splittingly heavy as Mandoro over a decade later, but there's a punishing weight held behind the more sinister riffs on display that showcase the latent destructive force he's clearly holding back.  Kaijin Nijuu Mensou is overall a very lighthearted and upbeat album, with songs that groove more than churn for most of the runtime, leaving a smile on your face instead of a menacing sneer, but it's clearly there, and quick explosions like "Jigoku Fuukei" and the pounding ritualism of "Yaneura no Neputa Matsuri" showcase this masterfully.  Wajima's vocals are crystal clean, with a strong presence that pushes its way to the front without snubbing the rest of the band, and the mid ranged croons and howls stand out as one of the identifying features of the band.  When you imagine old Japanese monks, this is the voice you're imagining voicing their hymns.  He sounds like a desperately passionate daimyo cooing down a mountainside while a small group of shirime follow him with instruments crafted out of a dying sakura tree, playing odes to something mystical that nobody truly understands.

Despite my natural inclination towards faster, more energetic music, there is a simple beauty in simplicity that I absolutely adore, and I think that's why I have such respect for Ningen-Isu.  They revel in this focused and deliberate style of songwriting and riff crafting, and that's how the world ends up with riffs as beautiful as the main riff in "Hiruta Hakase no Hatsumei", potentially my favorite track.  It's four notes, just a simple pattern and simple progression, but it works unlike anything else.  It's a very Sabbathian riff that conjures up so much wild imagery that it should be taught at fucking Berklee.  Unfortunately, in a paradoxical twist, this simplicity is also the reason behind the album's sole downfall, that being the fact that two of the three long songs just feel like they take fucking forever to finish.  "Imomushi" rides on a very pleasant melody that's soothing to listen to, but wears thin before the final section of bouncy riffage, and despite being the most overtly heavy song on display, "Yaneura no Neputa Matsuri" just drags on and on.  Only "Daidanden" is spared for simply being written slightly better, I don't know how else to explain it (it helps that the bass groove is just the damn grooviest thing ever).  But that's really it, two songs that I think are a little bit too long, everything else is a wonderful experience that more people need to hear.  Despite the obvious parallels, I don't see myself ever giving this band the Gargoyle treatment (ie. just never shutting the fuck up about them), but they're a wonderful group of tight, skilled musicians that understand to keep things simple and focused, and the expert grooves and general joviality of Kaijin Nijuu Mensou make it a worthy listen for anybody of traditional styled metal and hard rock.