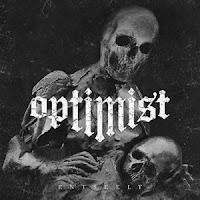 Some of the few weirdos who follow my writing might have noticed that I slowed down drastically this year, and there are a few reasons for that.  One of which is simply that I work 46-50 hours a week and I'm just exhausted and don't have much free time, another is that I lived without my computer for five days a week for most of the year (that has recently changed), so it's really been mostly impossible.  But honestly, one of the biggest ones is that I've been spending an inordinate amount of time with genres of music that aren't metal, which, frankly, is the only reason anybody knows who I am.  So with like 60% of my listening cycle being  punk and hardcore this year (two genres I like a boatload but simply am not familiar enough with to write about as analytically as I do metal (which I've been listening to in some form or another since I was a toddler)), there just hasn't been much for me to say.

Enter Germany's Optimist, four short haired moshers who did me the favor of combining the crunch and brutality of old school death metal like Brutality, Deicide, and Malevolent Creation, with the unrelenting drop Z force and barbarism of beatdown hardcore like No Zodiac, Xibalba, and Drowning.  Basically what this means is that Entseelt is fast paced but bursting with low end, while being brutally punchy but morbid and twisted.  It's extremity without going over either line, never fully relying on d-beats and Discharge riffs nor thrashy brutality of the early death metal acts from Florida in the early 90s.  The guitar tone is overwhelmingly fuzzy and heavy, not unlike being smothered with a wool blanket.  Vocally this leans more towards those early death metal bands, though you can tell there's a new school hardcore edge to it with how throaty and un-guttural it is.

More often than not, this leans towards the death metal side of the fence, and I think that's what the band does best, in all honesty.  There is an abundance of double bass and high tempos, with relatively few moments clearly made for two stepping, instead focusing on moshing and crowdkilling.  The slower moments all end up like "Kinder der Kälte", which is more twisted and crushing than anything else, bringing to mind some of the most sickly endearing moments of Blessed are the Sick.  Bone snapping riffs are abound, from the punk styled "Weltenbrand", to the mosh friendly stomp of "Leb auf den Knein", to the pure death metal brutality of "Ungebrochen", to the vaguely thrashy OSDM lunacy of "Dämmerung".  Despite all of these subtle differences in riff writing, the album does tend to roll together cohesively to the point where it's almost too much so, and loops around to being kinda samey.  It's only borderline in that regard though, and acts more as a full experience than a faceless blur.

While this never fully goes all out like Cannibal Corpse, it keeps the brutality high by essentially speeding up Suffocation breakdowns and treating them as the meaty main riffs they base their songs around, spiced up with enough simplistic chug riffing to keep the hardcore kids happy.  I've namedropped a lot of bands throughout this review, but in all honesty this is summed up easiest by comparing them to Disgrace, a band that's basically Jungle Rot with more slams and less guttural vocals.  Optimist fits right in alongside them and Xibalba in the realm of metallic hardcore nowadays, or maybe Nasty if they were less catchy.  It's non-technical metallic hardcore with enough energy and flavor to keep a speed freak adrenaline junkie like me satisfied, and while it won't be winning any end of the year accolades for 2014 anywhere, it's still a highly enjoyable slab of savagery that fans of both genres can gobble up excitedly.