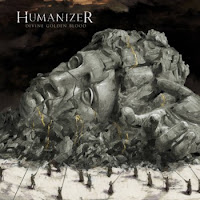 Humanizer has just made history as the very first Costa Rican band I've ever heard in my life, so that's pretty cool.  But beyond merely helping me stick another pin in my hypothetical metal globe, they also just really, really fucking rule.  If I had it my way this whole review would just be FUCK THIS KICKS ASS thirty times in a row.  But no, I hold myself to a much higher standard of professionalism than that, so instead I'll just say it twenty nine times.  FUCK THIS KICKS ASS.

Okay in all seriousness, Humanizer calls to mind a sort of hybrid of the best parts of Krisiun and early Kataklysm, but admittedly that's mostly because of how fucking manic the drumming is on Divine Golden Blood.  Maybe there are better bands to compare them to, but it's hard to think when my skull has been bludgeoned into powder.  This is extremely fast and extremely brutal death metal with a kiss of epic bombast.  Maybe a comparison like "Ex Deo but actually good" would be better, because the ancient Roman themes and occasional blasts of war trumpets and sweeping synths definitely adds an air of triumphant majesty to the head-spinning blastery on display.  This shit sounds like a fucking avalanche, it's a neverending onslaught of sheer pissed off aggression and I just can't get enough of it.

What really helps this stand apart from the legions of other death metal bands in the world actually has nothing to do with the epic backdrops or ten trillion bpm blasting.  No, it's actually their strict adherence to the Gospel of the Riff.  These guys never fail to let the guitars take center stage in front of the manic rhythm section or soaring strings, instead letting the true driving force of the music be the expertly crafted and powerfully destructive riffs themselves.  There are moments on tracks like "Raven", "King ov Kings", and "La Gran Lid" that hit like biting into a stick of dynamite.  There are no weak tracks here, and it's largely in part to just how much of a downhill-running steam train the experience is.  It's like you cut the throat of the Colossus of Rhodes statue and it just started hemorrhaging riffs.

I don't even really know how to gab on about this at length, it just rocks my fucking socks and this would have been an easy place on my year end list last year had I heard it in time.  It's hyperfast death metal with an epic twist but the appeal lies in the base more than the flourish.  Divine Human Blood is well executed and well written death metal with little else in mind than pure, hungry, devastation.  Just... FUCK THIS KICKS ASS.