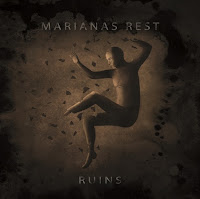 If anybody has been following me for the 11+ years I've been reviewing metal, y'all have probably noticed I almost never touch on death/doom in any real capacity.  It's not because I hate the style, there's nothing inherently wrong with it really, it's just not my usual wheelhouse since I generally favor the angry over the weepy, and what is death/doom if not weepy?  Marianas Rest here knows how to weep the weepy weep way, but really they stand out a bit for carrying their moodiness in a way that tends to be overwhelming, feeling like you're drowning more than you're sitting in your room moping, and for that they definitely stand above the pack a bit.

I'm being facetious here, because despite the "melodic death/doom" tag they seem to carry with them, Ruins has way more in common with the style of melodeath that Insomnium got famous for pioneering.  This keeps the downtrodden gloominess of Swallow the Sun and My Dying Bride at the forefront, no doubt, but it shares equal real estate with the cavernous double bass and deep growls that Finns seem to be so good championing.  That also isn't really my preferred style but I can at least jam something like Stone's Reach or Above the Weeping World (hey there's that word again) an any given day instead of necessarily needing to be in an existential pit of despair for them to connect.  Marianas Rest is similar in that regard, because while being in the right depressive mood can certainly enhance the experience, it isn't a necessity.

It's unsurprising that I find the more kinetic tracks like "Unsinkable" to be more listenable on the whole, since that one most exemplifies that rolling double bass and oceanic riffwork beneath submerged melodies that I enjoy so much, but these guys do switch it up on occasion with more overtly slow and gloomy tracks like "The Defiant".  The vocals tend to stay in that deep Niilo Sevanen-esque roar that further adds to the doomy inundation of swelling melodies, but they also swap between a higher rasp akin to a Harakiri for the Sky-ish shout.  They're quite standard for the style, but it works to tie the whole package together, which is really all I can ask of them.

The album's biggest asset is also it's biggest downfall, being that it's super consistent in its mood and delivery, despite the occasional tempo shifts, but while that creates a cohesive experience, it leaves little room for actual standouts.  Ruins sits at a plateau for its entire runtime and never really gets better or worse than the opening minutes of "Kairos".  I'm starting to run out of nautical adjectives, but invoking the deepest point of the earth known to man in their name is quite appropriate, because this is deep, heavy, and suffocating.  It'd be nice if there was some more overt creativity involved, because as of right now Marianas Rest doesn't do a whole lot to distinguish themselves from their influences, but they're good at what they do.  Ruins is definitely a worthwhile experience, but I won't begrudge you for getting halfway through and just switching to The Morning Never Came or Winter's Gate instead.  Because that's exactly what I did.