Behemoth - I Loved You at Your Darkest 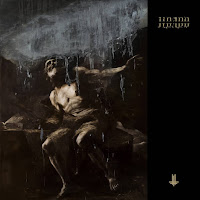 I Was Apathetic at Your Darkest

Most people have probably pieced together that I spend a lot of time covering the more "popular" bands in metal, and that's simply because I listen to way more stuff with established reputation than unknown obscurities.  It's not necessarily because of some sort of internalized elitism, but mostly because after over a decade of actively reviewing I've come to find that undiscovered gems are like .1% of all undiscovered metal while the remaining 99.9% was forgotten for a reason.  It's more a matter of pragmatism than anything else.  I only have so much time to listen to music nowadays, I choose to listen to things that are proved to be good.  Because despite my notoriety for trashing bad albums, I don't actually like listening to them because I'm not a fucking masochist.

Anyway that small bit leads me to Behemoth, who is pretty much second only to Cannibal Corpse as the biggest extreme metal band of likely all time.  The band, particularly Nergal as a celebrity, are fucking huge.  Especially in their home country of Poland, the band has been put on trial for blasphemy charges, and Nergal himself is a bona fide celebrity, having high profile relationships with pop stars, acting as a judge on the Polish version of The Voice, and presumably sparking Beatlemania style riots when he announced his leukemia diagnosis.  They're a big deal, is my point.  So with those first two things in mind you'd figure I'd be all up on Behemoth's dick, but the weird thing is that throughout all my years as a metal fan, even getting into more extreme metal around the time Demigod came out, I've just never really been able to give too much of a shit about them.  This time, I think the intersection of underground respectability and mainstream awareness just kinda missed the mark.  Zos Kia Cultus has a handful of good songs and I remember liking both The Apostasy and The Satanist well enough, but everything else has always registered as not much more than a faceless blur of blastbeats.

So that brings us to I Loved You at Your Darkest, an album by a band that has captured the hearts of headbangers across the globe that I've just never cared too much for, but admittedly I was willing to give them another shot with this one based on the intriguing title and the fact that I remembered liking The Satanist from four years prior. That one was much darker and more brooding than their competent-but-unexciting barrages of non-riffs from the years previous, and I Loved You at Your Darkest here continues in a similar vein, but it feels more... I dunno, calculated, if that makes sense.  I'm not sure how to explain it without sounding too tinfoily, but I get the feeling that Nergal and co. saw how successful The Satanist was (and don't get me wrong, it was a rare bona fide hit for a band of this style) and decided that their own personal celebrity and the comeback story of Nergal recovering from leukemia had nothing to do with it and it was all purely because they added in darker, slower, gloomier elements.  Thus, they leaned into those once-tertiary elements super hard this time around

As a result, we're left with a black/death album that's pretty content to sit in a midpaced tempo and just fart about with spooky melodies and huck gothy arpeggios at you as often as possible.  That's not to say the idea is dead on arrival, but it's hard for me to argue that the execution was flawless here, because even after a dozen or so spins I still just totally check out for almost the entire runtime.  Batushka took the metal world by storm with chants and ecclesiastic bombast, but the only time similar idea here really works are in the huge preaching-to-the-undead-army breakdown in "Havohej Pantocrator" and the similar section utilizing a children's choir in "God = Dog".  I'd say the chanting chorus in "Bartzabel" is a highlight as well but honestly I think it stands out more for being the most unabashedly "churchy" part of the album than it does for actually being super well written.  "Wolves ov Siberia" kicks the album off on an old school Behemoth vibe with intense blasting and furious riffage (if not entirely memorable, which was always a problem for them), and then "God = Dog" more or less continues it with some more of the new elements integrated in, but after then the album pretty much drops it.  There are moments of blasting intensity here and there but they're so few and far between that I can never remember where exactly they show up.

That's pretty much my main beef with I Loved You at Your Darkest, it's just kinda full of non-songs with a few standout moments here and there and that's pretty much it.  I actually think "God = Dog" is probably the best song here because it's the one that blends their old school furious blasting death with their new school ecclesiastic seriousness.  "Angelvs XIII" goes for the same thing with slightly less success (though the epic solo section near the end works really well) and "Havohej Pantocrator" just feels larger than life and kicks much more ass than it should, but that's about all I truly recommend.  I still don't know how the last few songs sound, most of the middle tracks blur by as well, it's honestly just a weird album that feels like it's caught between two worlds while simultaneously sounding very confident in its own confusion.  It's a very passive album and I feel like that really wasn't the intent, so I'm not sure how to feel about it.  Something did compel me to  return to this album fairly often, but even after all these months have passed I'm still not sure what that reason is, because there's nothing particularly grabbing here besides a few moments in particular.