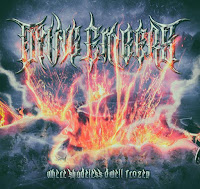 I've been saying for years that there's a difference between "melodic death metal" and "melodeath", even though I know it's a purely semantic distinction that doesn't really matter to anybody other than me and other likeminded nerds.  Just so we're on the same page, to me, "melodic death metal" is literally that, death metal with a lot of melody.  It retains the pummeling morbidity of its parent genre and blends the inherent intensity with a heaps of melodic sensibility (see: The Black Dahlia Murder, Arsis, Vehemence).  On the other hand, we have "melodeath", which is shorthand for that style that originated out of Sweden, sometimes called the "Gothenburg style" that basically amounts to "Iron Maiden with growls".  The actual death metal component of this subsect is relegated almost entirely to harsh vocals and occasionally high speed drumming, while the focus is much more honed in on overt guitar melodies and mid paced riffs, oftentimes featuring clean vocals (see In Flames, Scar Symmetry, Soilwork).

But throughout all of the years I've been doing this, I've always avoided the temptation to further split this dichotomy into a third category, mostly because up until now it always felt more pejorative than descriptive.  But here we are, with the debut Dying Embers album, and I just can't deny it any longer; "melodeath" has indeed fully given way to a third style - "mellowdeath".

To call this "mellowdeath" is a bit of a misnomer, but not for the inflammatory first half of the descriptor.  Where Shadeless Dwell Frozen is indeed a very mellow and easy listen, but implying that death metal exists anywhere near the galactic quadrant where this is written is horribly misleading.  I would honestly argue that this has more in common with radio friendly alternative rock than anything approaching metal, and that isn't necessarily a bad thing in a vacuum, but it certainly manifests as a bad thing when the songs are as fucking lame and unengaging as they are here.  Dying Embers is the cosmic endgame of the sound that In Flames really started pushing for over the last decade starting with A Sense of Purpose.  This is essentially a lost In Flames album where they just stopped pandering to their old fans for 45 seconds per song and Anders dropped the harsh vocals entirely.  Where Shadeless Dwell Frozen take the template they've been toying with for years now and just go full out with it, completely excising almost every trace of metal as a whole and replacing it with the toothless non-riffs under the choruses and spread them liberally throughout the entire runtime.

There was a point during "Beyond the Crimson Haze" where I actually thought to myself "This sounds like Alter Bridge", and I haven't even heard a single note of Alter Bridge's music since they had that one minor hit on rock radio back in like 2004 or whatever.  Even so, I was sure that this is what it sounded like.  Harmless rock riffs with a thin veneer of heaviness that completely dissipates when you examine it for more than a few seconds.  They're obviously not under any real delusions that they're any sort of metal band, but Dying Embers hasn't seemed to get the memo yet.  The whole experience here is very... well, mellow.  I can point out all of the moderately exciting parts, it's not hard.  You've got the opening 30 seconds to "Pursue the Light" and an even shorter section midway through "Dead to the World", and then that's it.  You've got like 40 total seconds of anything approaching adrenaline throughout the entire runtime, it's a fuckin' joke. I wish it was possible to go into more detail, but it isn't.  Dying Embers has produced an almost wholly encompassing non-album, presenting ten tracks that all sound more or less exactly the same, all sounding like they took as long to write as they do to finish reading this review.  It's pure plug-and-play workmanship with no real passion or excitement or even fucking effort.  It's just bad, safe, unengaging, weak, and so far beyond "not worth listening to" that I question if it even lands on "worth recording".

As if it couldn't get any more insultingly pointless, I've avoided talking about the man behind the band this entire time, but I can't really tiptoe around it much longer.  Dying Embers is the solo project of Jürgen Schurz. You don't know that name and neither do I, but he's the frontman of another presumably pointless melodeath band, Unhallowed. Before even learning that tidbit of info, I could have told you this was a solo project using my own two ears alone based on the sheer amateur incompetence. Dying Embers is very clearly orchestrated by one guy because the guitars are at the very least played with a level of competence that showcases some knowledge of the instrument, but every other aspect of the band falls so flat that it's obvious it's just one guy floundering through a bunch of elements he's no good at. The drums are completely flat and uninteresting, the bass doesn't play one note outside of the root note of whatever powerchord the guitar is playing at any given time, and the vocals are... wew lad the vocals are fucking terrible. It's bad enough that the instruments themselves are completely devoid of creativity, but the vocals manage to go a step further by completely lacking in talent and even then whiffing on execution. He only toys with harsh vocals for a total of like fifteen words, but that wouldn't be a problem if he was actually a decent singer, but boy is he not a good singer either. I say with zero hyperbole that he sounds like he's just kinda talking and shifting his pitch every once in a while. It's deep-voiced mumbling trying to masquerade as epic but failing to evoke any sort of emotion beyond all encompassing boredom. There's a section in "Praise the Signs" where he starts with a weak growl and halfway through just... stops. It genuinely doesn't sound intentional at all, it sounds like he intended to growl the whole section but his throat started hurting so he just kinda gave up halfway through and starting talking slowly again. It would be funny if it wasn't so fucking bland and dull that I didn't somehow completely miss that part on the first four spins simply because I had totally checked out and was more interested in fantasizing my own death than listening to this album.

So I'm finally giving up and acknowledging mellowdeath's existence as a codified genre, and the band that made me realize that yes indeed, people who weren't already moderately well known did indeed consciously choose to take influence from the awful waning years of In Flames's career was Dying Embers, a group consisting of one guy who I am positive wasn't even awake during all of the recording process. As soon as I understood that mellowdeath was real, I was forced to immediately divide it again into another subbier-than-subgenre into "bedroom mellowdeath", because this has all the hallmarks of awful bedroom black metal. Completely amateur, poorly written, unexciting, and vocals that sound like he's trying not to wake up his neighbors/parents. There is not one second of worthwhile music on Where Shadeless Dwell Frozen, and I recommend it to nobody. But that's okay, nobody is going to listen to this anyway.