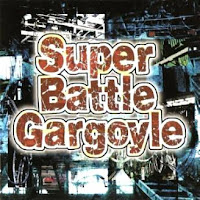 Awww yiss, mutha fuckin' Battle Gargoyle returns.  I maintain that Bushin is one of the weaker releases in their discography, with only two or three utter classics (which on a short EP is still damn impressive, which speaks volumes to how much I value the rest of their career), and for the longest time I felt the same about Super Battle Gargoyle here.  It sports a very modern, brickwalled everything-at-max-volume production and contains two rerecordings, two short throwaway songs, and an ill fitting melothrash song, so it seems like a bit of a disjointed mess upon the first couple listens.  But, and I know this is a bit of a pot n' kettle thing here because I hate this phrase, but the release really does grow on you.

I'm just gonna throw out the negatives first, because despite this being a Gargoyle release, and therefore almost guaranteeing that I love the shit out of it, there are a few.  "Will-o'-the-Wisp" sorta flip flops between having an amazing trademarked Gargoylian riff and a hearkening back to the completely unchained loony bin ravings of "Propaganda" waaaaaay back from Aratama 16 years prior.  Both of those things are fucking awesome, but that radical riff repeats itself way too much for the song being under three minutes, something Gargoyle rarely does and it's pretty clear why, especially when you take the other short song, "Yellow Metal" into account.  These guys aren't Slayer, these riffs need time to breathe and be appreciated.  One of their greatest strengths is in how they seamlessly flow all of their ridiculous ideas from one to the next, and with their unparalleled skill in oddball thrash riffing, more standard length songs work extremely well for them.  These two songs end up being mere interludes between the true highlights to me, even though I do appreciate "Yellow Metal" for being a self aware sendup of their origins (the lyrics mainly just consist of screaming about the fact that they're a Japanese metal band, and therefore are crazy ("THIS IS JAPANESE CRAZY METARU")).

No, the true highlights are the rerecordings of "Dogma" (rebranded as the upgraded "Super Dogma") and "Hito no Tame", and the more standard Battle Gargoyle originals like "Fire King" and "Battle Junkie".  The latter track stands as again, one of my favorite god damned things ever.  Considering this is one of the few releases they decided to release as their Battle Gargoyle persona, it's obvious that this is going to be nothing but ridiculously heavy and fast paced thrash metal loaded with crunchy hooks (the boxing kind), but a song like "Battle Junkie" still manages to floor me with how heavy and fast and hooky it actually is.  It utilizes a choppy and radically beefy main riff under the verse that sets the stage for what could certainly be, to me at least, the definitive Battle Gargoyle tune.  Really though, what ties the room together is easily the chorus.  It's just one phrase, it's just Kiba roaring "BATTUR JONKY" and the backup vocals grunting "OI" over and over again on an endless loop.  It should be lazy, it should be dumb, it should be effortless, but it's not.  They take such a simple idea and throw so much double bass and ballistic riffage behind it that it somehow morphs into the greatest idea anybody has ever had.  Even after all these years and all these reviews, it still floors me that Gargoyle manages to be so fucking good at everything they do.

The redone version of a previous classic, "Super Dogma II Turbo: Advanced Edition" is actually such a massive improvement over the Aratama original for me that I've grown to forget what the original recording sounded like.  I've listened to it so much that it's all but completely erased another song from memory.  Granted, I feel like fans of their older, pre-Kentaro era would probably prefer the original, since "Super Dogma" is more or less a dumbed down version of the original.  Any nuance is gone, replaced with more weight and bravado, but it works pretty much perfectly for this song.  It's a classic in their discography for a reason, but simple things like adding blast beats to the verse and replacing the more creepy deep vocals for nonstop frantic screaming just works.  The one flaw is that the solo is noticeably less awesome, with She-ja's almost inhuman fluidity and the brain-meltingly sweet violin shredding section being replaced with a shorter section exclusively featuring Kentaro's signature staccato melody.  Regardless, it's the obvious highlight of the album besides "Battur Jonky".  Weird people who have actually been following this series since I started it nearly four years ago may remember how much I loved "Hito no Tame" from the same album as "Dogma", and it still holds up as one of their best goofy honky songs.  The first time I listened to this, knowing it was Battle Gargoyle, and seeing it listed as "Hito no Tame B" filled me with dread.  "Man they're going to symbolically put that type of song to rest here, aren't they?  Man, this just isn't the type of song you can morph into a thrash anthem and not lose what made it so great, come on you're better than this!"  Yeah well it turns out I didn't even realize it was a rerecording the first time I ran through the album.  They somehow did manage to turn the dorky surf's-up song into a furious, blistering thrash song and somehow lost nothing.

Despite this being Battle Gargoyle, it's hard not to see this as a definitive statement of reinvention for the band.  With the way their music has been transmuting away from the quirky oddities of their early era ever since Kemonomichi, plus the way they took two songs from that same era and stripped them of all the weird qualities and made them heavier and meaner alongside originals that rank as some of the most brutal songs they've ever written like "Fire King" and "Trance Diver", it seems almost like a whitewashing attempt.  "This is who we are now, get used to it, here are two of your favorites reimagined as if we had written them fifteen years later, kiss our feet."  Even with that, I love the hell out of this EP.  Gargoyle makes it work, and regardless of whether or not you see Super Battle Gargoyle as a side release under the Battle Gargoyle persona or as a strong declaration of intent as to the future of Gargoyle, it's hard to say this isn't primo Gargoyle.  Moderngoyle may be all about frenzied thrash with strong touches of power metal melody, but this shows that it meshes just as well with the old She-ja style of more nuanced songwriting.  Either way my face has been punched hundreds of times in a little over 30 minutes, and that's all I really want.