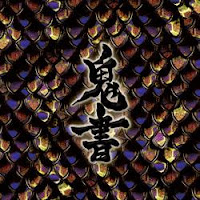 Total honesty here, this is what started it all.  I had heard the name of Gargoyle thrown around from time to time by the one or two vocal fans on MA before me, but it wasn't until Kisho dropped in 2011 that I decided to finally give them a real shot and see what the minor hubbub was all about.  Obviously, this album made a believer out of me, because I've already spent ~19950 words (57 of which were variations on the word "fuck", if you were curious) and 28 pages in Microsoft Word ejaculating over them as of this sentence, so hopefully it will do the same for you.

So admittedly, there's some wistful nostalgia influencing this review, but Kisho is greater than the sum of its parts anyway so it's overall negligible.  What you really need to know is that we have another Best Song Ever here, this time being the song that contained the riff that turned me into this unholy fanatic you see today, "Kowaku".  It's at 0:35, and it's the best damn riff the band has written since "B.B" in 2001, maybe even the still-to-be-topped "Shouryakukeitachi Yo" in 1994.  The track starts with an awesomely slow pounding riff accompanied by more of that glorious dual lead harmony that Kentaro has made his trademark by this point.  Already it sounds like it's building towards something monumental, and fucking Christ does it deliver.  That riff right there, that beautiful, sublime, absolutely punishing riff that starts after the abrupt stop was essentially life changing for me, starting me down the path of Gargoyle worship, because I knew right then and there that I needed to know every glorious thing this band had done up to that point, because if they were cracking out riffs that good when they were like 14 albums and 20+ years into their career, they had to have been one of the best bands ever at some point.  Even taking that stunning first impression out of the way, "Kowaku" stands as one of their best ever Moderngoyle tracks.  The crunch, the beefy energy, the wildly charismatic warble of Kiba's vocals, it's all in top form here.

It's also worth noting that, as we've hopefully established by now, Gargoyle is very fond of reusing templates from previous songs (there's been at least one "Ruten Yo no Nite" on every album since 1990, there's a new "Propaganda" every second album or so, the "Naidzukushi" was a staple up until the Solo Kentaro era, etc), and "Kowaku" utilizes my favorite template.  That obviously being the one used by "Shouryakukeitachi Yo" and "Iconoclasm" (and arguably "Kichiku", but that song is so unfairly heavy and brutal that it might as well has been written by a different band).  Whenever you spot that template being used, know damn well that it's going to be one of their best songs without fail.  If it starts with a slow-to-midpaced riff that focuses on stomping more than thrashing before breaking out thirtyish seconds in with a frantically fast riff, it's going to fucking rule.  Every time.

The remainder of the first four tracks all smoke face in totally different ways as well.  "Knuckle Art" continues the tradition of the opening track being a soaring and punishing anthem that sticks in your mind like glue.  "Kowaku" may have been the song to convert me, but "Knuckle Art" comes first and does an excellent job of exemplifying exactly what it is that Gargoyle does.  "Mumbo Jumbo" and "Amefuru Kumo no Mukou" take a slightly more catchy approach via different routes.  "Mumbo Jumbo" is all about hooks, with a fantastic chorus complete with "NAAAA NA NA NAAAA" backup vocals behind Kiba's continually impressive melodic warble just belting out "MAAAMBO JAAAAMBOoOoOoO" as loud as possible.  "Amefuru Kumo no Mukou" takes a more singalong approach, with a rousing chorus and jubilant verse riff reminding everybody why nobody writes riffs like Gargoyle.  I still can't think of any really apt comparisons, and I've been working on this review series for nearly four god damned years.  The extended distorted bass solo in the bridge is a definite highlight of the album.  Toshi is insane, I'm still floored by how much he refuses to just play background rhythm, even in this newer era when crunchy rhythms have taken center stage.  He still breaks out frequently.

Unfortunately, as you may have noticed, every album since Wa, with the notable exception of Kemonomichi, falls off in the back end.  It seems like since Moderngoyle began, they've been front loading every album with all of the best songs and leaving the weaker ones for the end.  It's been nearly a decade since there's been a surefire classic near the end of the tracklist like "Haretsu Ganbou" or "Nounai Jisatsu" or fucking "GUSH!!".  This is true with Kisho as well, and it's extra depressing because the falloff starts much earlier than usual.  Starting with "Jibuning", which is only the fifth track, the album starts to waver a bit.  Those first four songs are so good that the contrast is pretty stark.  It's hard to say exactly what the problem is, maybe the energy just isn't there, maybe it's because "Jibuning" is just sort of okay and the following track, "Shinkirou no Naka E" is the weakest ballad they've written to date that all of the momentum just gets sapped, maybe it's because this is the longest album in their career behind only Future Drug but just isn't as consistently strong, I don't know.  The point is that it's sometimes hard to sit through this entire album.  "Kyokugen Kaihou" is a solid rocker that sounds like it could have been straight off of Kuromitten with that busy guitar line in the verse, but it's kind of reminiscent of Ronpuu in that it's just kind of bland and effortless.  "Hone no Aji" is a really bland bouncy number that sounds more like background music than anything all that engaging.  "Inochi Yawarakaku" is yet another weak light song with no weight behind it that doesn't make up for it with a catchy singalong moment of any sort or pleasing melodies.

It's a real shame because there are two gems hidden in the back end, those being "VIVA!-aso-VIVA!" and "Kage Ou".  These two tracks are unique because, while they stack up in quality against the juggernaut of the first four tracks, they are actually inferior rerecordings of songs they'd previously released.  There is a split release between Gargoyle and two other bands nobody gives a shit about titled Kuro-Obi Rockers that was released to coincide with (what I assume was) a tour featuring all three bands.  "VIVA!-aso-VIVA!" and "Kage Ou" are the two new tracks represented on the split, and they're just undeniably more energetic on that one.  That's not to say that Kisho is a lazy album, because it's not, but holy shit listen to that old version of "VIVA!-aso-VIVA!".  It actually highlights something I was always afraid of happening but hasn't really made itself apparent yet... Kiba may be losing his voice.  That energetic garbling of his has never gotten less entertaining, and the only real difference between Moderngoyle and Weirdgoyle is that they're noticeably deeper and don't sustain long notes very well, but that was pretty much inevitable since he's one of the most obvious chainsmokers in metal history.  This is readily apparent in "VIVA!-aso-VIVA!", because something resurfaces in the split version that is excised on the full length version, and it's something I didn't even really realize was missing until it briefly popped up again and then disappeared just as quickly... Kiba just making weird noises.

That sounds like an odd thing to point out, but listen to the Kuro-Obi Rockers version and hear me out.  On the split, he is unhinged and manic as hell, in a way he really hasn't been since the 90s.  There's no control over that voice whatsoever and it works because dammit he doesn't need it.  He just needs to warble and gargle and be super cool about it. There's one tiny vocal flourish here that highlights how much of the weirdness has truly been excised from the sound over the years.  Around 2:35, in between the gang shouts of the title, he just does... I dunno a weird noise.  The most accurate textual approximation of the noise that escapes his mouth is "WahohwowhaowawawawawaWAWAWA".  It's so weird and pointless but so cool.  You don't really realize that those weird flourishes he'd utilize on songs like "Hunting Days" and "Meditation" are gone until you hear this version of the song.  It's much like how GWAR morphed from a completely anarchic band of whackaloons into an extremely tight metal band with a gory stage show.  Gargoyle went from a bunch of kaleidoscopic weirdos to an extremely tight metal band with a gruff and warbly vocalist.  I mean really, how long has it been since I've interjected a goofy pic to illustrate how fucking weird his vocals are?  I haven't stopped out of laziness, I stopped because he stopped being a lunatic.  I want more moments like the out-chorus in "Meditation" where he sounded surprised about falling off a cliff while being violently shaken by a gorilla.

So yes, this is, despite holding a special place in my heart for being my first Gargoyle album, one of their weaker ones.  The six great songs (plus "1-Ichi", which I haven't mentioned but is also very good) are so good that I tend to forget the rest of the album exists.  Regardless, it's worth listening to anyway because songs like "Kowaku" are so fucking good and it's Gargoyle so of course it's worth listening to get on it, son!