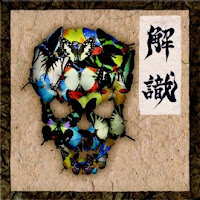 XXI: The Knowing of Answers

I'm not gonna lie, I'm super happy that it took me so fucking long to actually finish writing this series that two new albums have come out since I started, because otherwise we'd be ending this retrospective/analysis/fanboy rant of the best band nobody has heard of with the comparative bunny fart that is Kijuu, undoubtedly one of their weakest albums.

But no, I had to be ridiculously fucking slow and spend all my free time playing Brave Exvius (609,685,292.  Hit me up, I've got a 561 ATK Chizuru just waiting to Phantom Shadow your enemies into oblivion) and banging your mom, so now we have Geshiki to talk about as well.  You're welcome.

In all honesty, my thoughts before this was released were sorta similar to what I illustrated at the beginning of the Future Drug review.  The album cover is a break from their usual theme of stylized kanji title against a background pattern with no other logo to speak of, the color scheme is light (this time just flat out utilizing a bunch of colorful butterflies), the previous album wasn't really all that great, it all lined up.  Ergo I logically should have expected Future Drug to happen again.  But I didn't.  But it did.

Geshiki is, without a doubt, the best Gargoyle album since Yotaro's glorious sendoff in 2001.  Really, I don't know what the fuck happened here, but after a few albums of noticeable decline, of all the usual ideas not connecting as well, of all the individual performances becoming less and less impressive, suddenly everything got better.  It's like the band just pulled the rug out from under us and yelled "PSYCHE WE NEVER STOPPED BEING RIDICULOUSLY AWESOME!!"  For example, please note tracks like "Kettei", "Uzumaku Taiyou", "Chokugeki", and "Enreido".  What do these four songs have in common?  Blast beats, that's what.  Or at least ludicrously fast thrash beats like what Kreator would always utilize back when they were good.  What the fuck did Katsuji snort before recording this album?  He's never sounded better, and he was in his forties when this was recorded.  Somehow he just got young again and started drumming like an absolute maniac.  He's always been a very active drummer, but man around this time his energy just spiked.  I'm not convinced he hasn't secretly been replaced by a twenty year old.  There's a music video for "Gordian Knot" and he looks like he's about to explode during the double bass sections.  It's almost unspeakably cool to hear him give so much to his performance again, the band absolutely feeds off this energy throughout the whole album.

I focus on Katsuji, but really everybody has stepped up their game.  Kiba sounds the most ferocious he has possibly ever sounded, with his warbly rasp just blasting with hitherto unknown power, and Toshi even gets two extended bass solos in "Tsubasa no Kioku" and "Enreido".  The former of those two is also the most unique song they've penned in eons.  Not only is it the first meaningful instrumental since "Toki to Kaze" thirteen years prior, and not only does it feature extended solos for both bass and drums, it also marks the first time string instruments of any kind have showed up in over a decade.  The opening notes are huge riffs backed by somehow simultaneously booming and subtle keys, and the songs rolls and shifts through several different themes and moods, from the somberly triumphant twin melody in the intro to the easily headbangable "verse" riff to searing solos.  It's definitely one of the most ambitious and interesting tracks we've found on a Gargoyle album since Moderngoyle started, without a doubt.

The overt variance is one of the reasons Geshiki stands out so much from most of their late era work.  While I loved Kuromitten to death, there's no doubt it's just a bunch of heavy thrash songs with one slow, proggy "Ruten-like".  Geshiki on the other hand runs the gamut, from the thundering salvos of "Kettei" and "Chokugeki", to the highly melodic speed metal monsters of "Tiny Song" and "S.W.POWER", to the more uplifting and epic "Tsubasa no Kioku" and "Fullcolor Answer", to the catchy singalong tendencies of "Gordian Knot" and "Mankai Oratio", there's just so much to discover and so much to love here.  Despite being introspective and melodic, "Fullcolor Answer" gets pretty dangerously doomy at times as well.  I mean just listen to that opening riff and tell me you don't hear Sabbath in that.

I touched on it briefly up there, but there is indeed another Best Song Ever on this one, "Mankai Oratio".  I haven't talked much about their live show throughout all this simply because A) this is about their studio albums, and B) I don't know it all that well, but I've asked around because I'm curious about what their live staples are considering they have like seven dozen amazing songs that would be heartbreaking to leave off any set.  From what I've been told, their only true live staples at this point in time are basically "Shinu Koto to Mitsuke Tari", "Shi Ni Itaru Kizu", and "Super Dogma", while the rest of their setlist rotates all over the place.  There were some that were always there but aren't quite as much of a guarantee anymore ("Destroy", "Kanzen Na Doku Wo Youkyuu Suru", "Jet Tiger", "Yakusoku no Chi De", etc), but the point is that you never really know what you're going to get with them onstage.  The first time I heard "Mankai Oratio", I proclaimed out loud that this had to become a new staple.  It opens with a pounding drum beat and an amazingly powerful call and return between a re-energized Kiba and childlike backup singers.  The guitars roar in suddenly and ring out these massive sustained chords before the whole thing explodes into one of the tightest riffs they've ever written.  This is going to sound way less awesome than it actually is, but it's basically the same riff as the verse riff in RHCP's cover of "Higher Ground", and trust me when I say Gargoyle nails this simple riff roughly ten trillion times more effectively than the Californian funk-punkers could ever dream of doing.  I can't even explain it, just every riff after it is amazing, the chorus is that same call and return from the intro but it explodes with these triumphant octave chords ringing out in the back.  It's the most triumphant thing I've ever heard, I can't help but feel like I've just won something.  For fuck sake, ignore every other word of this review and just listen to "Mankai Oratio", it's probably my third favorite song they've ever written behind "Shouryakukeitachi Yo" and "GUSH!!".  Yes, it's even better than "Ounou no Goku", "Ruten Yo no Nite", and "Aoki Kobushi".  I'll never get over how they shit out a song this instantly classic so late in their career.  It's flawless.

The most amazing thing is that the rest of this album is almost just as good.  "Enreido" hearkens back to Kiba just raving like a lunatic (check out that "NAAAA NA-NA-NA NAaAaAaAAAA" in the intro), "Namida no Kachi" is the best ballad they may have ever written, "Gordian Knot" is one of the best Powergoyle songs out there, giving even "Shi Ni Itaru Kizu" and "Kaze no Machi" runs for their money in terms of effective melody and overall ferocity, just nothing sucks on this one.  "Tiny Song" is the only song that isn't an instant knockout and even then it would have easily been the best song on the previous album.

This is the twenty first entry in the Gospel, and it's their third best album.  Do not ever underestimate Gargoyle.