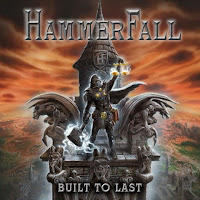 I was really hoping for a Sick of It All cover

We all know my opinion on Hammerfall, mostly because it's the same opinion 95% of metalheads share.  They're the safest band in the universe, nearly every album sounds the same, loaded to the gills with effortless "Hail Metal!" filler that feels like it took as much time to write as it does to listen to.  They've always had a good song or two per album but that's it.  Nearly twenty years and ten albums since their debut, and they've finally scraped together enough material to make one truly great album, and that should be unforgivable for a band with such status and longevity.  Their career seemed to be taking an interesting turn, with Infected trying a whole bunch of new things, so of course fans revolted since their favorite comfort food decided to change the recipe.  The deceptively titled Revolution was the sound of the band conceding and returning to their old formula, and yet somehow they sounded rejuvenated and put out their best album since Crimson Thunder (shut up, I like that one).  And now two years later here we are with Built to Last, and it's... well, the same bland, formulaic filler crap they've loaded nearly every album with since their inception.  The only reason it's "Built to Last" is because they've spent the last two decades proving without a shadow of a doubt that you can do nothing different and not lose any fans, so this is just another album pumped out of a production line with the sole purpose of touring again.  They're sort of like Overkill in that sense, only lacking a legendary early era that makes it at least fun to catch them whenever they come through your town.  Like usual, there are a few good tracks here, particularly the more speedy and energetic ones like "Dethrone and Defy" and "Stormbreaker" (the latter of which is genuinely great and especially frustrating because it shows that the band damn well knows how to rock), but when stacked up against eight more rehashes of "Renegade" and "Hearts on Fire", it just doesn't do enough to overcome the safe and unchallenging formula they've made their bread and butter over the years.   I just feel like the band has no charisma, which is baffling considering their reputation, but it's true.  Built to Last is merely "Another Hammerfall Album", and it's sure to be nobody's favorite.