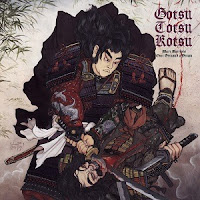 Tries to please everybody and succeeds to a point

I'm not entirely sure how I feel about this. It seems to be a midpoint between Legend of Shadow and Retributive Justice. Theoretically that should rule since I fucking adore both of those albums, but it's actually kind of disappointing since one of the reasons RJ hit so hard was because it was such a headstrong progression from LoS. Where LoS was really long and organic (which ruled), RJ was really tight and ferocious (which ruled). I was sorta hoping for them to keep refining themselves in that direction, which the first teaser track showed they would be doing. The rest of the album isn't quite as streamlined and brutal as "Sôran no Shichi E", instead reaching back into the bag of tricks they utilized on Legend of Shadow, with generally longer songs that feature an organic flow, as a result the album is ten minutes longer than its predecessor. Keep in mind this approach is awesome, but it's not as tight and fierce as Retributive Justice in this regard, so it does feel like a step back of sorts. With that said, there are some great moments and interesting new twists. "Bumei" is probably the most RJ-esque track on display apart from the opener, in that they're both fucking furious death metal with those thunderous roars I love so much. The title track has a fucking monstrous groove, but it also features an extended section where each instrument gets a solo, and it just feels weird and out of place for a band that finds so much of its strength in remaining consistently energetic. "Kiga no Kyofu" also stands out a bit for being significantly more technical and melodic than the band usually is. On one hand that's awesome to see them spreading their wings like that, on the other hand it sounds like they're getting a bit more "normal" in a sense, and it lacks a tinge of that signature character they've carved out for themselves. Then there's "Chinurareta Tabiji", which sounds like a lost Legend of Shadow track and it completely owns that album's sound, with the high tempo grooves, lack of blasts, and twisting narrative told using almost exclusively fucking badass riffs.  It's still great, which is to be expected from GTK, but it's sort of a blend of the last two albums, which will definitely be a problem for people who thought Legend of Shadow was too bloated and Retributive Justice did a good job of streamlining everything while also amping up the intensity. I loved both albums so I love this too, but it's not as good as either of them I think. Sorta just feels like it came out too fast and the band didn't have enough time to really grow or evolve in any capacity.