Gorod - A Maze of Recycled Creeds 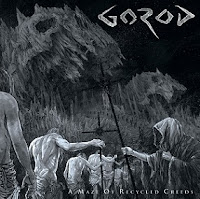 A rare example of a new logo making older music

When I was first really getting into death metal and all of its subgenres (so like 2007-08), Gorod was one of the bands that really latched on for me.  Leading Vision (and to a slightly lesser extent, Process of a New Decline) were a rare kind of tech death that didn't focus on unending sweeps and blast beats, nor did it slather itself in so much progressive noodling that it descened into jazzy nonsense and forget to throw hooks at you like a pissed off Mike Tyson.  There was a bouncy jubilance that many of their contemporaries lacked, keeping the jazzy moments appropriately sparse to make them a fun and unexpected twist instead of an incessant feature, and it made them rise above with aplomb.  Unfortunately, around the time of Transcendence and A Perfect Absolution (and the subsequent change of vocalists), they became exactly the type of band they deftly avoided being, focusing way too much on jazzy Cynic worship and totally losing that pulverizing blend of sinister brutality and flittery eccentricity, dialing in on the latter and losing what made them so uniquely wonderful.

That preamble was merely to explain why I ditched the band and didn't bother listening to their most recent album, 2015's A Maze of Recycled Creeds, until now.  For all the fans like me who dug them from the Gorgasm days up until 2009, this is the comeback we've been waiting for, because this is easily the followup to Process of a New Decline, time displaced five years later.

This is just as jazzy and progressive as before, but the hammering death metal has been amped up again.  It's weird, because the driving force of the music are still the jumpy harmonized leads that are pretty much always drilling away in the foreground, but it's all rooted in a more menacing, metallic growl again.  This album is as vicious as it is impressive, coming off as some bizarro universe where the instrumentalists of Dream Theater were huge fans of Symbolic-era Death.

The hooks and catchiness are the things I missed most in their down era, and that's what's back here to make me a fan again.  One thing they were always great at was toeing the line between straightfoward, driving metal and catawampus melody with disjointed rhythms.  Head back to that marvelous 2006 album and check out "Thirst for Power" for a great example.  Here you can check out tracks like "Temple to the Art-God" or "Syncretic Delirium" and draw immediate parallels.  Even tracks that take on their newer approach like "Rejoice Your Soul", with straight flukey jazz sections and spoken word moments cutting up the frantic metal just end up working more effectively this time, even though it is still one of the weaker tracks.  Lighter tracks like "Inner Alchemy" chuck ohrwrums at you like no tomorrow, and that's what makes the band so special to me.  Nobody else so deftly manages to intertwine mind-melting creativity in their riffs and leads (like on "From Passion to Holiness", owner of the best riff on the album), it really is a breath of fresh air to hear the band take on the style that made them so unique in the first place without trying so hard to outdo themselves and ultimately overdosing on Cynic.

What they lack in morbid brutality, Gorod makes up for in sheer forward motion.  They're an energetic band with tons of conviction and songwriting chops, drawing comparisons yet again to Anata, as opposed to something like Necrophagist, despite the focus on melody and hookiness.  A Maze of Recycled Creeds isn't a particularly ferocious album, nor was it necessarily meant to be.  Gorod is a band more tailor made for guitar nerds than greasy headbangers, but as a member of the latter group, I adore this anyway.  There are things I'd still change, like the new vocalist isn't nearly as powerful as the old one, instead devolving into ineffective shouting at times instead of that thunderous roar, and some of the more weird moments hearken back a little to closely to the previous album to my liking, but in all honesty it's mostly just a product of trying to blend A Perfect Absolution with two parts Process of a New Decline, and it works for what it is.  They're not going to be the same band they were in 2006 nearly a decade later, but they tried to bring back those songwriting skills, and for the most part they succeeded.