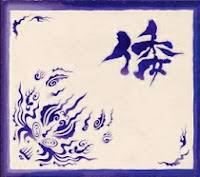 Well, it's time to soldier on.  Time to lace up the boots once more and continue with my quest to review every goddamn Gargoyle album there is to review.  I feel like I've earned a nice little hiatus after my first two blocks came so quickly, and this also gave those newbies following along some time to digest all the music and history I've thrown at them throughout the length of the series.

(I wrote that paragraph in April of 2014, that's how long it took me to finish this block, fyi)

But that's all over now, and only about a year after the stellar, career defining monument that was Future Drug, Gargoyle unleashed Wa, the next chapter in their ever expanding ouvre of brilliance.  This release stands out because for the first time, Kentaro alone handles all of the guitar duties.  Yeah, it's a shame, but Yotaro has finally left the fold at this stage in the band's career, and his inventive riff writing will surely be missed (keep in mind he was an original member, and despite She-ja's brilliance as a writer and player, he was really building and forging his own path from the base that Yotaro had initially laid down).  So how does the band fare with arguably their most influential mind finally and for realsies gone?

Well, if She-ja could adapt to Yotaro's writing and forge his own creative path with it, why can't Kentaro?

Basically what makes Wa special is that it's merely a logical continuation of where the band was creatively with Future Drug.  It's relentlessly pummeling, time-bending heavy, and just as quirky and out there as any previous album.  Sure, it's not quite as eclectic as Natural or Gaia, but that's one of the things that earns it so many comparisons to it's monolithic predecessor; Wa is expertly focused.  Every Gargoylian trademark that fans have come to expect can be found here, but it never comes off like the band is just ticking off boxes on a checklist, it's still very natural for them.  We've got upbeat, funky numbers like "Gacha x Gacha" and "Kuruizaki Janguru", blisteringly quick and weighty monsters like "Kyokutou Gata Kansensei Seishin Osen" and "Yuki Yukite Massugu", uplifiting "Kaze no Machi" type quasi-power metal rippers like "Ushinawareta Jidai ~Lost Generation~" and "Mugen no Zero", and of course, the obligatory "Ruten no Yo Nite" style song in "Kisou".  I think that's something most readers have been able to cotton on to at this point; nearly each and every Gargoyle album has a certain "type" of song that will almost invariably show up.  Pinpointing exactly which of these type of tracks is the best of its group pretty much just comes down to personal preference.

It's kind of hard to write about Wa because, while it's pretty much equally as awesome as any previous album in theory, it's also the first album to seem kinda fillery and not memorable from front to back.  The last handful of songs are just nowhere near as punishing as the first seven or so.  "Kamikaze Gyangu Dan" has that awesome chorus, "Kyokutou..." has the Sodom-esque insanity in the percussion, "Gacha x Gacha" is another funky tune that they're so good at (like a slightly more subdued "Baby Cat"), "Lost Generation" is just epic as fuck, "Kuruizaki Janguru" is pretty much the catchiest thing since "Doumushishubai", and then... the rest of the album.  I can heap praise on to the first two thirds of the album because there are a lot of ideas that all connect brilliantly, and then the last three or four tracks are just kinda there to round out the running time.  I mean, they're still creative, they're still ripping and/or soothing depending on the kind of track they're going for, but they don't stand out as much as that stellar first portion.

That in itself is somewhat unsettling for the band in question.  Is this something to blame on Yotaro's absence?  I wouldn't say so, since they powered forward just fine with She-ja alone, and Kentaro is clearly no slouch.  But the fact of the matter is that this is probably the first time where I feel like the amount of good ideas they had didn't last for the full album.  But again, at the same time, the good stuff is super, super good.  "Kyokutou..." rivals tracks like "Haretsu Ganbou" and "Dilemma" in terms of sheer, testicle obliterating heaviness, and "Lost Generation" is the spiritual sequel to "Kaze no Machi" in my eyes.  The guitar lines are so overabundant and melodic, and the gang shouts in the chorus evoke a feeling of urgency that the band harnesses so consistently well.

In the end though, Wa is 10000% essential.  Even if the last handful of tracks are largely uninspiring to me, "Kamikaze Gyangu Dan" through "Kuruizaki Janguru" are all among the best of the best.  The truth is that Gargoyle has been so consistently incredible since their inception that anything less than a genre defining classic can be fairly judged as somewhat disappointing.  Wa is not a disappointing album, not in the slightest, it just has a very minor stumble near the end and it just ends up making the first chunk even more endlessly replayable.  I don't know what makes me a bigger fanboy, the fact that the mere fact of the album not being a transcendentally timeless classic makes it a minor disappointment, or the fact that despite a weak back end that I readily admit to being only half as good as the first seven tracks, the album still ends with a very high score overall.

The bottom line is that a solid Gargoyle album is better than a great album by most thrash bands.  Get over it.