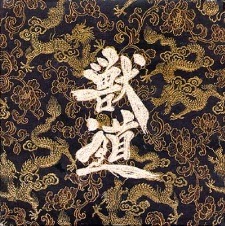 I'm obviously more in love with this band than I am with my wife and children, that's not really a secret (little Kazuhisa and Toshiyuki Head will have to live with that for the rest of their lives), and every other album has me proclaiming a different song as the new official Best Song Ever.  Kemonomichi here, the band's tenth full length, is no exception.  I'll get to my rant about the Best Song Ever in time, but I also have to preface this whole deal by saying that Kemonomichi is both one of the best, and one of the worst, Gargoyle albums in their career.  "Why the hell is that?" you may ask, and the answer is somewhat simple.

This is Future Drug-esque in terms of consistent riffwork and hooky heaviness, but it also marks what I consider to be the last "classic" sounding album, and the beginning of Moderngoyle.

I need to accent that I said classic sounding album, because you'll see as the series goes on that there are still albums down the line that I like more than Aratama or Gaia, but from this point on, Gargoyle starts to shift their focus away from the oddities that made them so unique and more towards just being tighter, heavier, riffier, and just better songwriters than every other band in the style.  That's not to say that they just become any old thrash band from here onwards, not even fucking close.  I've done my damnedest to not mention any future albums as I've been writing this, but it's only fair to warn you that "OOO ~Zero.Wa.Maru~" is one of the last tracks of its kind you're ever going to hear from the band, and the horn filled cornball songs like "Baby Cat" and "Doumushishubai" are practically extinct for the next decade.  It's sad, but so are those fucking ASPCA commercials with Sarah McLachlan and those are effective as shit (assuming the goal is to make me bawl into a bucket of ice cream while cuddling my dog).

But okay, so the electronic tinged and bouncy as hell "OOO ~Zero.Wa.Maru~" marks the death rattle of that goofy style of song, if you pretend I'm not sitting here spoiling the ending for you, it stands as yet another worthy addition into their catalog of goofy upbeat party rockers.  It's also a bit unfair to harp of that previous point when this record contains "Futatsu no Ten", which is pretty much the only song of it's kind the band would ever release.  It's a fun, upbeat and poppy punk song with Kentaro on vocals, and it ranks as one of the catchiest things the band would ever produce (those female vocals in the chorus are just sublime).  And of course, that trademark downtempo dirge is back as always with "Fukaki Rurou To Hateru Kageru".  This one is one of the better ones, in my opinion, as it has a main riff remarkably similar to that super famous on in "Kashmir" by Led Zeppelin.  I am far from a Zeppelin fan, but if you forced me to choose one song of theirs to listen to for the rest of my life, I'd very likely pick "Kashmir".  It presents this imagery of being lost in the desert, wandering aimlessly as every oasis and obelisk and settlement you happen upon turns out to be merely a trick the heat is playing on your dehydrated eyes.  It's a six and a half minute excursion that elicits feelings of both hopeless futility and intrepid adventure.  I constantly compare these kinds of songs to the obvious predecessor from Furebumi, but I'll give "Fukaki...", despite being one of the most thematically similar to said originator, the benefit of it's own distinction.  Admittedly mostly because I just like it a lot.

But I said this album focuses mostly on preposterous weightiness and sharp ferocity, didn't I?  Oh shit son, does it ever.  "Kichiku" ranks itself as one of the heaviest songs in their oeuvre, and has become a Battle Gargoyle staple over time.  And for good reason as well, listen to that pummeling intro and how it segues into that fucking maddeningly infectious main riff.  Every single second of this song is just primo Gargoyle, and it's hard to call it anything other than the most Battle Gargoyle-y song they've released oustside of that moniker.  It's heavier than dark matter but faster than a train.  In that vein, there's also "XXX ~Batsu.Kakeru.Peke", another one of their heaviest songs to date, but with a similar electronic twinge (SUPER subtle) like the previous "Hakkyou Gamer", which I don't actually consider a highlight but it still stands for once again being one of the last bastions of the quirkiness the band exuded so strongly in the early 90s.

But I just have to stop and do what I always do.  There are, like always, three absolutely stellar classics that everybody absolutely needs to hear.  "Bakudan Chuudoku", "Kemonomichi". and "Aoki Kobushi".  I don't know if you've noticed or not, but very frequently, the opening track on any given album is going to be a highlight, and "Bakudan Chuudoku" is no exception.  In fact, if I had to pinpoint the exact kind of song that exemplifies Moderngoyle, it'd be this one.  The almost Iron Maiden-esque lead melodies over the vicious riffing, extraordinarily strong melody, and tons of awesome gang shouts.  The hooky heaviness pretty much reaches it's apex on songs like this, and it's what Gargoyle has always done best.  Lots of bands can make you involuntarily headbang and air guitar, but there are a precious few who can put such a gigantic shit eating grin on your face at the same time.  The title track does the exact same thing, with the transcendentally catchy chorus lines, except it ups the ante by making the main riff very similar to the main riff from "Satori" from Junreiin.  It's been a while, but just in case you need a refresher, "Satori" is one of the greatest songs ever and has no less than two of the Best Riffs Ever in it.

And despite that, I still haven't gotten around to explaining Kemonomichi's entry into the Best Song Ever pool, "Aoki Kobushi".  I just... goddamn this song does everything right.  Previous contestants like "Kaze no Machi" fluttered around with epic melodies, while "Shouryakukeitachi Yo" was just a riff salad with an unbelievable chorus, and "Doumushishubai" can only be described as what I once referred to (running on three hours of sleep across two days) as a "goof balloon".  "Aoki Kobushi" just takes all these and aims for sheer catchiness over blistering riffage and hits bullseye better than anybody ever has in the history of anything ever.  It doesn't even fuck around with intros or silly shit like that, it just starts with the chorus and goes from there.  Oh, it's also the best chorus they've written since "Shouryakukeitachi Yo" and will be stuck in your head for fucking days, end of story.  I can't even describe it, it's so good, so upbeat and aggressive, so goddamn flawless that it makes me utterly suck at my job.  Throw in a clean guitar solo that leads into a soaring traditional metal one and there's just nothing wrong.  Every single segment of the song is just flawless.  It has one goal in mind, homes in on it, and never deviates from the course.  Fuck all these bands trying to do too much and be masters of everything, just find something you're good at and then work on doing it better than anybody.

Despite opening the review with a statement that this is one of the lesser Gargoyle albums for what it signifies historically, that's actually just a heaping load of bullshit, because Kemonomichi is, really and truly, just the transition album, and it's still every bit as good as classic Gargoyle.  And hell, I like it more than Wa, which was an album that still felt like Yotaro could have been involved.  Kemonomichi is the sound of Kentaro finally fully taking over guitar duties, and it's also the sound of him being really goddamn good at it.  There are honestly almost no weak tracks here, completely unlike the previous EP and LP that had some undeniable filler.  This is an absolute classic of transitional Gargoyle, and anybody who doesn't like "Aoki Kobushi" is officially off my Christmas card mailing list.

PS: "Shouryakukeitachi Yo" is still totally the best song.
Posted by Bastardhead at 10:00 AM