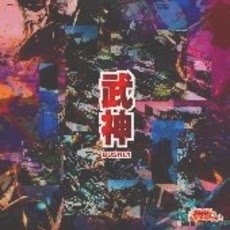 For those of us on the other side of the pond (which pond? Japan is surrounded by ponds) who don't/didn't have the luxury of seeing the band live on a frequent basis, there have been rumors swirling about Ga-Goiru's alter ego.  A band which had so prided itself on cultural oddities permeating through high octane thrash/heavy/power/justgoddamnawesome metal was allegedly shedding their kimonos and tribal masks and instead adorning themselves with gute olde ketten und leder.  A band that crafted nine straight albums of quirky melodies intertwining with pummeling thrash was apparently eschewing that former quotient and just ripping faces left and right with naught but riff after riff after riff.

Basically, around the time of Gaia, Gargoyle started occasionally doing small tours and one-off shows as "Battle Gargoyle", the alternate persona where they'd play only their hard, fast, and heavy thrash songs.  Fans may also know these songs by their parallel distinction: "all of their best songs".

Well shortly after Wa marked the reluctant departure of longtime guitarist, Yotaro, the remaining four boys decided to release a short EP under the banner of Battle Gargoyle.  The reason?  Probably nothing special.  They probably all woke up one day and flipped a communal coin to decide which awesome thing they would do today, and said coin happened to land on whichever side represented "release a blisteringly crazy EP".  And release a blisteringly crazy EP they did, and it's title was Bushin.

One thing I've noticed throughout this series is that the three EPs I've covered so far (this one, and the previous Kaikoroku and Junreiin) are usually much less ambitious than their full length brethren.  The songs are always shorter, punchier, and more to the point.  This fits in brilliantly with the ideal of Battle Gargoyle, since they would shun the grandiosity and magniloquence of songs like "Kaze no Machi" or "Wakakusa no Kimi" and would instead just rather bask in the headbanging fury of songs like "Dilemma" and "Haretsu Ganbou".  Bushin is exactly that.  It is a short love letter to all things neck wrecking, chock full of the band's signature pomp and vigor, except with none of the naturally quirky peripherals they're known for, instead focusing that extra energy on simply delivering a tighter, more ferocious performance of some truly brutal and pummeling thrash.

With that said... Bushin is not one of their better releases.  I like it a lot, don't get me wrong (Gargoyle did release it, so...) but in the grand scheme of things, it matches up with its predecessor in Kaikoroku in that it's kinda skippable within the scope of their entire career.  That doesn't mean tracks like "Underground Market" and "Busou Seri" aren't worth hearing (they definitely, one million percent are worthy of a spot in any setlist), but overall I just find myself listening to this very rarely.  That could honestly just be a result of the band's discography just being so bloody magnificent on the whole, of course, but hot on the heels of something ambitious and creative like Wa, Bushin feels kind of like a collection of discarded ideas that the band was fond of but hadn't found any way to fit them in the context of an album yet.  I know that isn't what this is, but considering its place in the band's catalog, I can't help but view this as a collection of B-sides and unreleased tracks as opposed to what it truly is; another frenzied example of how incredibly punishing this band can be when given a handful of expertly written riffs and a seemingly limitless supply of hooky melodies.

There are obviously standout moments here, like the marching beat of the intro track and the primal rage of "Busou Seri" (probably the best track on the album).  "Kaijuu Z" stands out for the two spoken word fake-out endings*, and "Hagure" has a breathtakingly intense soloing section, but... I dunno, these songs are all great, but they're all second or third tier Gargoyle songs.  There's a lot of crushing gallops and berserk screams like there always are, but the songwriting seems to be resting on its laurels a bit.  There are riffs aplenty, lordy loo is this the riffiest release they've put out yet.  I still think Future Drug has much better riffs on the whole, but this one just never slows down, never experiments, never does anything that isn't bone crunchingly heavy and furiously fast.  I suppose if you're one of those dudes who prefers their fast, no nonsense thrash above all else, this is exactly the kind of album you've been waiting for, but for me, I just feel somewhat let down by the general lack of memorability in the songs.  They're all good, and the first three (from "Shinu Koto To Mitsuke Tari" to "Busou Seri") are all fantastic, but the rest of the EP doesn't really stick with me.  It's basically the same issue I had with Junreiin, except this one is pure fucking thrash the whole way through, just the special way Gargoyle does it.

I wouldn't say it's worth skipping, but it isn't one I'd rank in the top half of their discography.