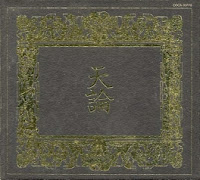 I've gone this far into this overwraught and hackneyed analysis of a band with a crazily dedicated fanbase without really talking about one of the biggest draws, She-ja's guitar playing/writing.  I go on and on about how much I love Kiba and Toshi, and while I don't blab as much about him, Katsuji as well (seriously, the guy has the skill and intensity of Dave Lombardo coupled with the creativity of Pablo Picasso on mushrooms), but She-ja really helped define the band's signature sound.  The blazing thrash/trad metal hybrids of his riffs worked so incredibly well under his huge Helloween/Gamma Ray styled lead lines and impeccable ear for melody that I feel like any other guitarist would have never helped forge an identity as strong as this one.  Both future guitarists that would end up in the band are excellent players and writers, but She-ja laid the groundwork for what they would do (yeah yeah I know Yotaro was an original member and had a hand in writing a some of the early songs, but She-ja is the one on record and the one we'll all remember, sucks to suck), and he did it spectacularly.  I haven't talked about him as much because it's pretty normal for a band of this style to have a great guitarist, so he's a little unfairly overlooked by me for that reason, but believe me, She-ja is the real deal.  For this early segment of the band's history, he was the only guitarist featured on each full length, and his final involvement with Gargoyle before leaving to focus on the slightly-less-so-but-still-awesome Volcano (or for being kicked out for being the Zapp Brannigan of Japanese metal, your choice), was 1993's foray into focused aggression and flat out wicked insanity, Tenron.

While the attitude is on a level as lighthearted and fun as Aratama, Tenron is infinitely more aggressive.  The amount of metal songs have been upped here, with only one kinda light rocky song in "Inochi Yukashi Inochi Nagashi", and the rest either being fast barnburners like "Ame Ni Mo Makezu" or "Haretsu Ganbou", uplifting rippers like "Shinpan no Hitomi", fun bouncy romps like "Amoeba Life", or the greatest song ever like "Doumushishubai".

I say that a lot, I say tons of songs are the greatest songs ever.  Hell, just two days ago I claimed that about "Hito no Tame", but today, the greatest song ever is "Doumushishubai", and as far as I'm concerned at this very moment, it always has been and always will be.  Remember how "Hito no Tame" was the happiest goddamn song you've ever heard?  Well I lied, motherfucking "Doumushishubai" is the happiest song ever written.  Listen to how upbeat and poppy it is, listen to the female gospelpop singers belt out in the chorus, listen to how syncopated and how exuberant Kiba is to be singing this lines over such a fucking beautifully cheery beat.  Seriously, it sounds like it could be part of a children's television show, and it's incredible.  How could this not put a smile on your face?!  NO ONE HATES HULA HOOPS!

Seriously, I can't wipe the smile off my face while it's on if I tried.  There is nothing in the world better.

With that one (fucking sublime) exception, almost everything else to be found on Tenron is heavy and aggressive as all get out, spewing out some of the most intense swagger since Furebumi.  And what makes it so special when compared to the great-but-not-spectacular Aratama is that the different styles they toy with are a lot less cut and dry here.  What I mean is that there's a lot of cohesive blending of blistering thrash, uplifting heavy metal, melodic piano passages, funky party jams, and everything in between.  "Haretsu Ganbou" rivals "Dilemma" for the heaviest song written at this point, and "Wa ga Tousou" takes the route of "Propaganda" and just plays out like the musical representation of a psychotic episode.  "Ishikikyuu" is the first of many imitators to the monumental throne of "Ruten no Yo Nite", though (like the album as a whole), it's considerably more upbeat in execution than the somber dirge of that previous classic.  Apart from the mood being a bit lighter, and the track a bit shorter, it does emulate that song in it's pace, direction, and sheer weight.  "Shinpan no Hitomi" is another faceripping thrasher, but it's one of the most uplifting songs in the genre, with those patented Gargoyle melodies and the beautiful solitary piano notes punctuating said melodies in the outro, all backed by furious double bass and Kiba's trademark howling.

If Aratama was a bit of a salad bowl in how all of the different elements intermingled with one another, Tenron is more of a melting pot, and the constant underscore of uplifting harmony gives the album a very special aura about it that makes it stand as potentially the crowning achievement of the She-ja era.  In fact, if there were no Furebumi, I'd be 100% confident in making that assessment, but as it stands, they have one more slightly more awe inspiring album already.  Like always, the slower lighter rock styled moments don't strike the same chord as the hard rocking and soaring numbers or the bone breakingly fierce thrash rippers (except for "Doumushishubai", which I reiterate is the best and happiest thing ever written holy shit), but it's a mere stumble instead of a completely comical faceplant.  It's a very positive sounding album, and even when it's being preposterously aggressive on shorter tracks like "Wa ga Tousou", "Haretsu Ganbou" or "Amoeba Life", it manages to put a smile on my face.  Yet another notch in Gargoyle's increasingly phallic bedpost.