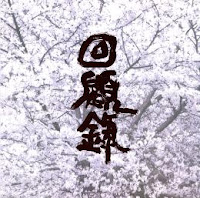 Kiba and company must have anticipated the complaints about Aratama from brain dead thrashers like myself, because less than a month after the release of that lighter and funkier album, they released a short little EP by the name of Kaikoroku.  What this feels like to me is basically an olive branch to the fans of their heavier style, saying "Here guys, we haven't forgotten about you".  Considering everything here is a reworked version of songs from previous demos, singles, and whatnot, one could be forgiven for interpreting this as some sort of statement that the band was moving away from metal as a whole, and was thus giving their OG fans one last hurrah.  Spoiler alert: Tenron obliterates that assumption mightily, but after an album sprinkled with lighter and more progressive moments, Kaikoroku is a fun little bonus to be tacked on to the end.

Of the five tracks here, none of them are quite so standout awesome that I need to spend an entire paragraph ranting about it like I have with the previous albums, but nothing disappoints.  I initially had something here explaining my confusion with why the track on Furebumi named "Hunting Days" has so little (read: nothing at all) in common with the "Hunting Days" here, and it's been since brought to my attention that it's because "Hunting Days" was actually a bonus track on some versions of Furebumi, and whichever dickdolt translated the version I downloaded fucked that part up and mislabeled the last track.  So WHOOPS, oh well.  The point is that the track here starts with Kiba burning his hand on a stove and cussing out every neighbor he's ever had by name before the rest of the band pounds on some of the most headbangable rhythms ever written and tearing into the soundtrack to a burnt-hand-retribution spree killing.  Clearly two very different approaches, and the rest of the EP follows suit.  I'll admit to being unfamiliar with the original versions of the rest of the songs involved, but I imagine that they're either ever so slightly improved or ever so slightly worsened.  I doubt Gargoyle is the kind of band to completely butcher their own music.

The stop-start bounciness of "Kuro" stands out a bit, as do the more folksy elements of "Dying Message", the adventurous basslines of "Jaaku", and the sheer primal enthusiasm of "Crazy Sadism", but the fact that these are all relatively older songs is painfully apparent.  They're all tight, well composed and well played, but they don't feel as developed as as the last album prior to this.  But with that said, I'm going to completely counterpoise my argument from Aratama and say that the more immature and frenzied style on display here works brilliantly.  Aratama wasn't as refined as Furebumi, and Kaikoroku is more simplistic than either, but there's a lot of heart at play here.  The rhythm section is just as awesome as usual, showing that the bass and drums can do more than merely support the guitar, while Kiba and She-ja are incredibly charismatic as always.  There isn't as much to say here as there normally is because it's simply just a very short EP with each song following the same basic idea.  Luckily, that basic idea is "deathrape mouthfuck thrashnutting", so the heightened intensity and soaring power metal style leads over the creative yet pummeling riffage creates that signature Gargoyle sound that I and you and so many others love.  Despite not being quite as interesting as the band usually is, there isn't a lot wrong with Kaikoroku, and it's definitely worth hearing.

Especially for "Hunting Days".  There are few intros as effective at making me want to sucker punch wolves than the first 33 seconds of that song.