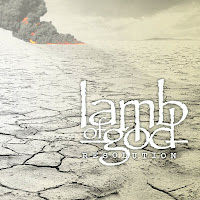 Hey hey hey, remember way back in the review for As the Palaces Burn when I told y'all to put a pin in a particular line from "Ruin"?  Well here's the payoff to that particularly insufferable brick joke.

"This is the resolution / The end of all progress"

Nine years before Resolution dropped, Lamb of God accidentally prophecized their own downfall, because it should be pretty clear that each album up to this point has been incredibly distinct.  Wrath was the fast one, As the Palaces Burn was the one that laid the foundation for their iconic riffing style, Sacrament was the one with the atmospheric songs, etc.  Resolution here is the first one without a single new idea and instead is just a wholesale rehash of Ashes of the Wake, which was already their worst album anyway.  All of that lazy midpaced trash that sounded like it was written in an afternoon is back here with a vengeance, and even the three good tracks can't save this album from the trash bin.

I don't even have much to say about this album simply because I've already gone over how phoned-in Ashes of the Wake was and this album is pretty much that exact same album a second time.  There are a few good moments here and there, but it's not enough to save it.  "Desolation" sounds like the second coming of "Beating on Death's Door" and as such is a total fucking banger with memorable riffs galore (seriously that chorus riff is one of the more simplistic ones they've ever written but holy shit is it lethal), "Guilty" takes their Pantera-esque groove and injects it with some honest to god death metal influence (parts of it sound like Anata (specifically the main riff sounds like "Shackled to Guilt") and now that I've pointed it out you won't be able to unhear it, you're welcome), and "The Undertow" isn't quite as inspired as the other two but at least sounds like a good version of one of the weak songs on Ashes of the Wake combined with some of Adler's most inventive drumming.  But that's it, those three songs start the album off on one hell of a high note and then we're treated to nine fucking straight up filler tracks.  The previous two albums really made me think they had managed to keep the songwriting consistent enough to avoid their previously crippling filler problem, but no, they were flukes.

I don't even want to keep writing about this, and that's a shame because I chose to highlight this band in a series partially because each album is so different and has such a different mood.  I was dreading this album simply because it's not different at all, and the fact that it's four-fucking-teen tracks long and features a stretch of nine in a row to close the album on total uninspired mediocrity is just icing on the cake.  The sad thing is I'm not even entirely sure that I believe myself when I say it's just a rehash of Ashes, because it starts off with a two and a half minute dirge that's so deep and brutal that it just sounds like straight up doom metal with "Straight for the Sun" (which is actually pretty ballsy considering how fast and aggressive the previous album was), and it's not like "King Me" doesn't at least try to be super epic, "Insurrection" isn't their first and only track to truly flirt with nu metal, and "Barbarosa" isn't a full on acoustic interlude, but all of these new ideas are just so completely drowned by the total groove metal mediocrity of "Visitation", "Invictus", "To the End", "Ghost Walking", "Terminally Unique", etc.  You'd think this would be a total banger since it's front loaded with all the best songs in the first handful of tracks but then it just flops around like a fish out of water with no real identity for the next hour and a half.  The only song that's even half alright in that stretch of lameness is "Cheated" and even then it's only because it's the fastest one.

This is going to be the shortest one in the series because holy shit I just don't care about it.  "Desolation" is a classic track worthy of any setlist but the rest of it (even the other good songs) are just totally skippable and not worth your time.  I'm gonna get lazy and just stop now.  Fuck this nothing-album.