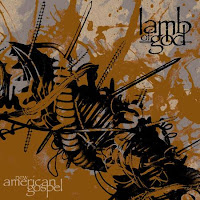 I have something of a proclivity for review series, y'all know that.  I've run through quite a few and have even started a few that I haven't bothered to finish across like ten years.  Usually when I do a discography-focused one, it's because I have some sort of intimate connection with the band, and Lamb of God is no exception, though it's for slightly different reasons than you may expect.  Just like with Mastodon, I was a really big fan in high school, but if anybody has been able to pick up/remember my age, I was in high school during the boom of Myspace bands and the eventual domination metalcore and deathcore in the American metal scene.

And I hated all of it.

I originally had like three more paragraphs detailing my journey to discovering that being a teenage elitist that only liked classic bands and instantly despised anything that had harsh vocals or lacked solos was stupid and arbitrarily restrictive, but I realized that it dragged a lot and wasn't really important in the end.  Just know that Lamb of God was the band to break that prejudice for me.  For many people my age, they were their first "extreme" band.  I wouldn't go quite that far for me since I did already like Slayer and Kreator's work in the 80s, but they were probably the first distinctly "modern" band that I really liked, and certainly the first in that loose collection of metalcore-tinged bands that was being called the New Wave of American Heavy Metal at the time.  And now, in 2019, with Chris Adler formally resigning from the band and breaking their 20 year streak of stability (two decades with the original lineup is one hell of a feat), I think it's high time to take a look back and see how they've held up, and to simply chronicle their journey throughout their time in the limelight.

And no, I'm not starting with Burn the Priest because I've only listened to the album released under that name like twice in my life.  Maybe I'll make it a bonus chapter or something.


Lamb of God first broke onto the scene in 2000 with this, New American Gospel, an arguably ambitious title because whether they knew it or not, they were right on the cusp of ushering in an entirely new era of heavy music for the country.  Despite that, New American Gospel is really unique in their discography because, unless this is your first exposure to the band, this is clearly very different from the sound they'd become known for in the near future.  In essence, this album pulls double duty being both the first Lamb of God album and effectively the second Burn the Priest album.

At this point in time, Lamb of God was still a very chaotic band.  That's not to say this is really spazzy and technical, because it's not, but this is by far the most anarchic and least structured album of their career.  At almost no point does the band sound like they really know what they're doing, and frankly that's the entire appeal to me.  This is the sound of a relatively young band (though everybody barring Willie Adler, the "baby" of the band being a few years younger than the rest, were all in their late 20s at the time) just flying by the seat of their pants and figuring shit out as they went.  There are obviously moments of well crafted songwriting like the iconic buildup in "Black Label" or the intro of "The Subtle Arts of Murder and Persuasion", but on tracks like "A Warning", "In the Absence of the Sacred", and especially "Confessional" they sound absolutely fucking unhinged.  There is a shitload of hardcore influence on here, and I don't mean the same kind of hardcore influence that many of their contemporaries in the As I Lay Dying or Killswitch Engage camps were showcasing.  This is less about calculated dropped-string open chugs and more about sheer chaotic noise.  It would be misleading to say that specific type of chuggy breakdown never appears here, it's pretty common actually, but the songs aren't built around them.  Instead everything feels like it happens by accident.  This is a very organic album that drowns itself in agony and frustration, with the drums lashing out in violent tantrums at seemingly random times underneath discordant and damn near unlistenable wailing riffs.

That might sound like I'm knocking the album, but I'm really not.  This is going to be an insane comparison, but bear with me: I view New American Gospel similarly to how I view Ulver's Nattens Madrigal.  I know they're very different albums, but they have a common thread between them in that they're nigh unlistenable masterpieces.  This album is, objectively speaking, a fucking mess.  It's a structureless mishmash of disconnected riffs and drums that are far more technical than any of the other instruments, which seem content to take quasi Pantera-esque groove and inject them with massive doses of speed and dissonance.  The typical verse-chorus structure is nowhere to be found here, with each song instead ebbing and flowing with its own self contained energy.  This is said with the benefit of hindsight, but considering where the band would go from here, this became an excellent monument to weirdness within their discography pretty quickly.  This is a very loose album, for sure.  The one thing holding everything together is Chris Adler's drum performance, which is comparatively extremely tight and paradoxically technical.  He throws in little triplet fills all over the place and manages to tie the room together despite being one of the most chaotic elements of the band in a vacuum.  I'm sure if you could hear isolated drum tracks somehow, it'd be almost impossible to tell which track you're listening to, he's all over the god damned place.

But really, there's an elephant in the room here, and it's time to address it.  Randy Blythe's vocals on this are wildly different from what he'd rise to prominence with... and they're actually the best part of the album.  Whereas every album after this he'd feature a very deep roar/shout (more in line with his almost hilariously bassy speaking voice, seriously he talks like fucking Xerxes in 300) on the debut here he features a piercing shriek almost exclusively.  Even when he goes deep, he sounds like he's wailing and/or vomiting.  It's almost black metal-esque in approach, though it's probably more accurate to compare it to the more emotionally brutal hardcore bands of the 90s.  He sounds like a mix of a choking leopard and Chewbacca trying to lose weight for the prom.  This vocal performance is really what I think makes New American Gospel so special, because it recontextualizes all of the nasty riffage into something positively ugly.  Despite the nearly endless praise I've given this album, it's honestly really hard to listen to, and Randy is a big reason why.  Everything is so painful and raw, like he's tearing his own heart out and bleeding all over the floor with each line.  It's well known that he was a bona fide semi-functioning alcoholic for most of the band's early era, and it's also well known that he was absolutely fucking hammered when recording this album.  From what I understand, he recorded all of his vocal tracks in one day, drunk off his gourd, with no breaks.  "Black Label" is famous for having only four real words followed by a bunch of random scat noises that they tried to fit lyrics to afterwards.  "Letter to the Unborn" is also pretty infamous for the lyrics being unknown apart from fan guesses thanks to the band refusing to publish them since they were so personal (though it's known that it's about Randy and his wife at the time suffering a miscarriage).  It adds so much to that aforementioned raw ugliness of the record, Randy being pissed to his eyes during recording and just being super broken and vulnerable at the time.  You don't get that sort of open passion every day, and they never managed to recreate it.

Overall, despite being a tough listen featuring ten tracks of seemingly random screeching noises, I'd actually almost be willing to lay my chips down as this being my favorite Lamb of God album based solely on its consistency.  There are no real dips in quality here apart from maaaaybe "Pariah" and "The Black Dahlia" being kinda inconsequential in the grand scheme of things, though the former has an absolutely blistering climax.  The groove element that would soon become their bread and butter is here, but it's somewhat hidden underneath layers and layers of screaming madness.  "Black Label" has it in spades and "O.D.H.G.A.B.F.E" is presented as an almost Sabbathy dirge of doom riffs, but upon further examination it's just slower groove riffs.  Either way, New American Gospel is the biggest black sheep in their discography, in part because it's stylistically closer to their Burn the Priest era than anything else, and ergo is indisputably their most intense record, replete with thrashy discordant hardcore and arguably grindcore influenced blasts of ferocity.  It's admittedly a hard listen, with an aversion to catchiness and a severely undercooked production underneath a wailing vocal performance.  Honestly though?  I wouldn't change a single thing about this album.  It's an accidental masterpiece, pure lightning in a bottle that they never came close to recapturing.