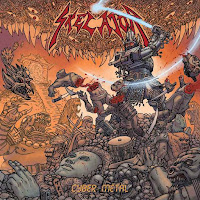 Trent Dilfer as a metal singer

You probably wouldn't guess it since I'm a fucking nerd who has been reviewing metal albums on the internet for like 12 years and my trademark quirks are finding ways to reference Futurama and Final Fantasy as often as possible, but I'm also a big sports fan.  I've been watching nearly every Bears game every Sunday since 1997 and somewhere in the veritable sea of people during the 2013 Stanley Cup victory rally for the Blackhawks, you can spot me giving the finger to every camera I saw.  One thing that's always kind of baffled me about the sports world is how few players actually seem to be... good at what they do.  It's insane to me that out of the entire country, there's only ever like ten truly great quarterbacks at any given time.  How come nobody can throw as accurately as Tom Brady or score as consistently as Alexander Ovechkin?  Is Marshawn Lynch seriously the only guy who can break a tackle?  There are certain position players that can absolutely make or break a team, and sometimes you can fluke out if the rest of the team is strong enough, but other times it'll be the Achilles Heel that sinks a great season.  You can have a great defense but a shitty quarterback, and sometimes you'll be the 2000 Ravens and sometimes you'll be the 2006 Bears.

This problem persists in metal as well, because I swear it feels like sometimes a band with a great musical section can be completely fucking crippled by a terrible vocalist and it blows me away that they seriously can't find anybody better.  Skelator is the 2006 Bears in this scenario, with the band writing fun, ass kicking heavy metal analogous to the three phase domination led by Urlacher, Briggs, Tillman, Harris, and like ten other superstars, not to mention Hester breaking out as the greatest kick returner in history, but unfortunately they're saddled with Jason Conde-Houston on vocals, who is the Rex Grossman in this scenario, completely handicapping the band/team with fucking terribly thin vocals/a 1.3 QBR.

So yeah that's kinda this gist of it right there.  Cyber Metal is, from a musical standpoint, very good.  It's pretty basic 80s trad metal worship rife with dueling guitar melodies and grand galloping riffs, with drumming that stays fairly basic and almost never breaks out into high speed double bass.  It's very orthodox, "normal" metal but it's very competent and the songs themselves are well written and catchy.  A song like "Seven Scars" is primo throwback metal that I can't help but adore in almost every respect, and the adrenaline and tempo stay very high without ever transforming into power or speed metal.  All eight tracks are well written jams that could be a contender for throwback of the year.

But there's one hell of an elephant in the room here, and that's the vocals.  Just... holy shit they're so bad.  I can only assume the band sticks with this tuneless deadweight because he's an original member, because he sounds like a hybrid of James Rivera with a sinus infection and John Cyriis hiding behind a circus tent and huffing helium for a year.  Is there seriously not one single person on the west coast who can't sing better than this guy?  The album lasts a whopping eight seconds before he first belts out his laughably shrill harpy shriek before spending the next 40 minutes tunelessly wailing all over banging riffs.  This is such a huge bummer because this is seriously top ten on the year in terms of the musical department but he's so bad and so prominent that it's impossible to look past.  I don't care how cool it is that this is a lyrical cheesefest that indulges itself in schlocky anime like Fist of the North Star and features the A+ rhyme of "Laser eyes and napalm thighs" because the vocals are so wretched that I can only assume it's an intentional joke.  I'm actually somewhat familiar with this band already since I somehow wound up with a copy of Agents of Power like seven years ago, and I can say with utmost confidence that Jason has always been exactly this shitty and has zero chance of improvement in the future.  Ya know, I likened him to John Cyriis earlier, and I've always thought he kinda sucked too, but at least Agent Steel managed to bring monster hooks much more reliably than Skelator and his high pitched falsettos at least sounded intentional even if they always felt somewhat off.  I can't stress enough how fucking bad he is, it's criminal.

So yeah, this is a musical success but a vocal failure on a transcendental level.  Usually when I bitch about a trad metal vocalist sucking, it's because they sound bored and have no range.  This guy is special in that he can hit some crazy high notes but he manages to make not a single one of them actually gel with the music.  I can't recommend this in good faith, and if Skelator ever wants to be taken seriously as a viable force in trad metal revival, they absolutely need to cut fucking bait and drop this schmuck.  I don't care if he's the guitarist's brother, he sucks shit and needs to fucking go.