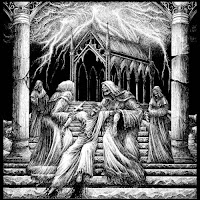 Solid, if nothing new

Well, now that my big projects are done, I suppose it's time I get back to what I've dedicated this year to doing so far: reviewing the neverending deluge of promos.  My first choice to jump back in was a band that wound up having multiple sexual assault allegations against the guitarist (enough for the label to drop them), so I figured fuck that I'm not gonna give that guy any press.  Then when researching my second choice I found out that motherfucker is in that band too.  So uhh... hey rapey guy?  Go away.

So fuck it, third choice, we're heading to the Garden State to revel in some decidedly rapeless brutality.  Crush the Altar's debut demo, Abhorrent Oblation, doesn't bring a whole lot of new ideas to the table, but they make up for their lack of creativity with some simplistic barbarity that's as effective as it is rancorous.  All three tracks here are reminiscent of early Pestilence, taking thrash riffs to their logical extreme and firmly planting one foot in the realm of death metal.  This blend of high speed thrash mania and mid-paced crushing morbidity is nothing new, but it's refreshing to hear somebody not try to outsmart the classics every once in a while.  Sometimes you've just gotta pay homage to the masters that came before you and pay tithe at the altar (before crushing it).  I've said before that originality isn't a necessity, and this is more evidence as to what I mean.  There are smatterings of Consuming Impulse, Altars of Madness, and Leprosy all over the place, and the adrenaline is kept consistently high.  There's also a really menacing mid-paced section halfway through "Demonizing the Ancient Lore" that I think was supposed to be super morbid and devastating but honestly just sounds like the bridge of "Master of Puppets" tuned down two steps, so that's kinda funny.

Honestly there just isn't much to say here.  I always struggle with writing for short demos and this is no exception, but if you like any of the bands I've namedropped then you're sure to find something to like here.  This isn't going to set the world on fire, but these three guys definitely have talent and know what they're doing when it comes to evil death/thrash.  So if nothing else, I'll keep my eye on 'em in the future to see if they ever truly forge their own identity, because they're very good as an unoriginal utilitarian extreme metal band as it is.