Pulver - Kings Under the Sand 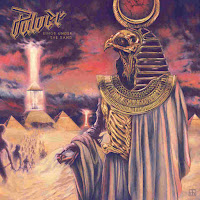 My ancestors on both sides of my family immigrated to America like 200+ years ago, so thanks to having like five generations of my family born and buried in the same town, I have zero tangible links to my European ancestry.  I've been thoroughly Americanized.  You'll never catch me in a lederhosen with a stein of lager, is my point.  But to my knowledge, if you trace one aspect of my lineage as far back as the records will go, I'm like 90% sure that a good chunk of my family originated in Bavaria.  So I have some ancestral link with Pulver's homeland somewhere a dozen or so generations down my line, so fuck it, I feel like I'm obligated to give them a chance.

I say a chance and not a recommendation because yikes did this need some more time in the oven.

Pulver is what happens when kids get together and start a band before they're actually any good at the practical aspects of being in a metal band beyond simply having big dreams.  Kings Under the Sand sounds like what happens when you master step one of your respective instrument (tune it properly and play in time) and then just immediately fuck off to go writing songs.  Pulver draws a lot of comparisons to Tank thanks to the vocals sounding an awful lot like Algy Ward, but there's a whole lot more to Tank than simply having cool gruff vocals.  Pulver sounds like Tank in slow motion.

I think the overarching problem beyond the songs just not being very good is that this has precisely zero ambition beyond recreating something that was already successful nearly 40 years ago.  It's like these guys sat down with a notebook and wrote down their goals for the band and landed on exactly two bullet points.  1: No influences can extend beyond 1985.  2: Great bands like Iron Maiden and Riot had a mascot, therefore we can't be a great band without a mascot either.  They make it a point to slap this Phantom Hawk character on the cover and title the first real song after him, and offer some sort of backstory to his existence in press junkets, but it's really not unique or exciting to attach recognizable characters to metal albums anymore.  Eddie and Vic Rattlehead and Snaggletooth were all just cool evil looking things that helped bands stand out before you could just look up anything and everything on youtube before commiting to a purchase, so not only have metal mascots lost their functional purpose, but any new band attempting to recreate that trope from metal's heyday is just going to look like a tryhard dork right out of the gate.  Maybe it's a stupid point to harp on what's fashionable in metal, but this is just silly and dumb.  Nobody gives a shit about the backstory to your album art, that's the exact shit that Iced Earth gets made fun of for, knock it off.

Beyond the aesthetic eyerolls, the music itself is just ultra-green and weak.  Calling this album "midpaced" would be too generous, because apart from about half of "Blacksmith's Lament", the title track, and one brief dueling melody in "Alpha Omega" (which boast a top speed of "about a hair slower than 'Sharp Dressed Man'"), Kings Under the Sand is maddeningly slow.  I don't mean "doomy", I mean slow.  It's so fucking frustrating because it makes the album feel so much longer than it is.  Everything is sluggish and lethargic, just dozily plopping along with a pace that I couldn't even favorably call "deliberate".  Obviously not every band needs to take influence from Motorhead (as awesome as that would be) and needs to push the limits of speed for their era, but a big part of why that boom of heavy metal out of Europe in the late 70s and early 80s was so exciting was because everything was so reckless and unhinged.  If you're going to take heaps of influence from Tank and Accept, do yourselves a fucking favor and venture outside of the 100bpm ceiling.  That wild and daring youth that drove these bands to all strive to outdo each other is completely absent here.  Instead of a drunken madman flinging beer bottles against the wall and picking fights in the pub, this is drunken in the sense of a broken and despondent vagrant who hasn't shaved in months lazily stumbling towards an alleyway before shooing a cat out of his favorite piss-soaked blanket.  Nearly every riff on the album emulates that fun era near the dawn of the 80s when the muscular hard rock of the 70s was truly forming into a sound that was distinctly recognizable as heavy metal, but Pulver missed the memo that energy and presentation was every bit as important a part of the package.  Trying to sit through the droning mess of "Phantom Hawk" or "Warrior Caste" is a chore, and I'm amazed that these guys really thought this was the best way to introduce themselves.

And before anybody accuses me of simply wanting the band to be something they're not, I'll concede that you're partially correct, because of course I want every band to be better than they are, but I'll counter with the track "Qarinah", because that one is just as slow and plodding as the rest of them, but that one just fucking works.  The tom-heavy drums just fucking pound their hearts out on this one, and the main riff is so fucking groovy and heavy that the pace complements it perfectly.  "Qarinah" is the sole track with any lingering sense of unpredictable danger.  There's a brief moment around the two minute mark where the pounding riff just drops off for a measure and you're hit with a solid second and a half of silence before it comes crashing through again, and it's just a damn awesome effect.  There's proof here that Pulver can indeed accomplish some cool stuff with this complete lack of urgency, it's just a shame that it's precisely one song that manages to do it correctly while the rest of it has so little attitude.  The very next track, "Warrior Caste", is almost hilarious because it's basically the exact same idea but shitty.  It's like if Eternal Champion had written a song in an afternoon while they were all 15.

Reckless and wild, this is not.  Kings Under the Sand is an incredibly frustrating experience because it just never gets to the point and farts around with warm up riffs and non-starter ideas before just ending on a whimper.  The vocals are kinda cool since they have a unique chainsmoking coarseness to them, but the music surrounding it is so fucking toothless and lame that I just can't in good faith recommend this.  "Qarinah" is a pretty solid track showcasing how this sluggish style can work, but the other seven songs are glaring condemnations as to why it doesn't.