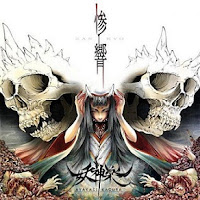 Hey!  Have you been listening to me bellow for five-plus years now about how fucking awesome Gotsu Totsu Kotsu is?  You should, because it seems like they've been steadily growing in popularity ever since I first heard them in 2013 with the stellar Legend of Shadow.  They're pure excess in the most extreme form, with tumbling slap bass and whirlwind riffs at light speed, they're one of the most magnanimous and iconoclastic metal bands of the modern era, completely shattering the mold of what death metal is capable of without treading a path that dozens of other bands are doing at the same time.  Fuck atmosphere and dissonance, they just play three riffs at the same time and found apparently the only way to have a noodly low end that complements the frantic brutality instead of needlessly showboating with constant soloing.

But hey, now that they're popular enough to finally have their three latest albums on Spotify, are you yearning for something much less popular that hits the same basic idea of "dizzying death metal brutality with a distinctly Japanese flair for showmanship"?  Well look no further than Ayakasi Kagura, a one-man wrecking crew from Ibaraki.

Obviously Ayakasi Kagura reminds me a lot of GTK, but I should emphasize that they remind me of GTK's more "normal" segments.  There aren't any mystifyingly dazzling instrumental moments here, instead it's like an entire album of the opening of "Gokumon" instead of the bridge of "Nadegiri".  That still means this is really good, but it's a bit less adventurous in its brutality.  What Zankyo focuses on more than anything is pure, unrelenting speed.  There are more churning moments here and there, and "Kurotsuka" has a positively doomy riff in the bridge, but every moment is comparatively short lived and ultimately gives way to headspinning blasting and hyperspeed tremolo riffing. That's really the album's greatest strength, because as a fan of warpspeed insanity, this hits all the right notes.  It's not particularly techy either, which isn't necessarily a good or bad thing in itself, but I can't help but admit that I have a soft spot for death metal that rips along at this speed without ever truly losing the base simplicity that makes death metal so morbid and punishing in the first place.  It's like a Deicide album on the wrong table speed, and that's just fucking rad.

Despite that, this is still a decidedly modern album.  There are a few scattered breakdowns here and there that do a lot to help keep the experience from being too one-note.  The man behind the band (whose name I've never seen transliterated so I'm going to just call him Waifu Slayer) is also really fond of Mithras/Sarpanitum styled screaming lead guitar.  Soaring above the manic riffage and absolutely hog wild percussion at any given moment will be these squealing spacey leads, that lend a ton of character to the album.  The vocals are also much deeper than regular old death metal, taking more cues from the BDM scene than anything else, and they're fucking monstrous.

Zankyo isn't a total knockout though, unfortunately.  The two most obvious problems are the length and the production.  52 minutes isn't too long for a metal album in a vacuum, but for this particular style it just gets to be completely overwhelming.  We didn't need fifteen tracks of such maddening brutality, everything starts to blur together before long and as a result I can't help but lose interest after a handful of tracks nearly every time, no matter how good they are.  This is an album best listened to on shuffle simply so you can hear some new tracks in each session before losing interest.  Waifu Slayer could have easily cut five or six tracks off of this and put it closer to 35 minutes for a much more concise and focused experience.  The production is a bit of a mess too.  It's a brutal wall of sound and it works for what the music is, but the levels seem to be uneven and as a result most of the sound is totally dominated by drums and vocals, especially during the (very, very frequent) blasting sections.  The riffs here are all excellent but they're often completely buried under an avalanche of frantic percussion.

So on the whole, Zankyo is definitely worth checking out for any fan of limitless brutality, and I'm eternally thankful for Waifu Slayer bringing the project back after a short hiatus and getting this album out on Stillbirth Records so I can actually fucking hear it here in the States, but it is undeniably a flawed gem.  Take it in short bursts, otherwise your brain is just gonna fuckin' melt.