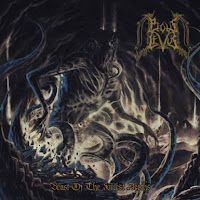 I don't normally do promo reviews simply because I feel like there's an unspoken expectation to, ya know, promote.  I don't like doing that simply because most bands sending out mass promos through an incessant PR company frankly aren't all that good.  There are exceptions of course but in my experience my inbox has been flooded with literally dozens of albums per week from bands that are just flat out mediocre in every way.  Lately I decided fuck it, I'll check a handful, what's the worst that could happen?  That's how I came across Pious Levus here, and I can say with 100% certainty that I never would have otherwise and neither would anybody else because fuck this is boring.

I brought up the whole promo thing because the band is halfway made up of members of Hod, another band I checked out thanks to promo spamming when I wrote for Metal Crypt (a site positively swimming in low-tier promo trash) some eight years ago.  Hod was pretty nondescript black/death back then and Pious Levus is pretty nondescript black/death now.  Beast of the Foulest Depths sounds a lot like what I remember Serpent sounding like years ago, although maybe a bit further on the evil atmosphere side than the straight ahead Goatwhore-styled riffery that it shoved in your face.  And "in your face" is a good descriptor for Pious Levus, and it's only halfway a good thing.  I like bands that are intense and dangerous sounding, and that's certainly the case here, but it's backed up with precisely zero interesting songwriting.  It's all very green, paint-by-numbers demon worshipping extreme metal made up of blast beats, tremolo riffs, and extremely lazy grunt-yells.  The album throws no curveballs, no expertly written riffs, no standout performances, it's just white noise of shouting and blasting with nothing of note happening within the cacophony.  This is a band made up of scene veterans, which is sort of tragic because it simply showcases why they never broke out beyond their local Texan scene in the first place, they're... just not very good.  No songwriting skill, no instrumental/vocal standouts, it's low effort black metal about Satan in a world that already has like 100,000 bands exactly like that.

Special shoutout has to go to the ninth track, "Demon Xusha's Invocation".  I get that it's supposed to sound like a ritual, but I'm not even kidding when I say it's almost three minutes of the same two chords repeated over and over and over and over and over and over again.  Every eight cycles or so the second chord will ascend instead of descend with a dissonant tremolo thing behind it and sometimes the drums keep pace with the ride instead of the hi-hat/splash/whatever it is.  But that's it!  It's so fucking lazy.  I can't even begin to comprehend how the band thought this passed muster.  How the fuck can these dudes have been making music since the late 80s/early 90s and somehow decide a three minute duh-duhhhhhhhh duh-duhhhhhhh duh-duhhhhhhh song was worth not only writing, but going through the effort of recording and ultimately making the cut for the band's debut fucking album?  A ten year old could play this song.  A ten year old could write this song.  "Demon Xusha's Invocation" is bad and so is Pious Levus.  Don't listen to this.