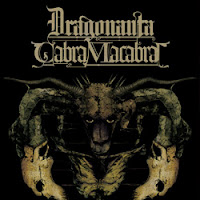 Is Satan really a secret anymore?

The World Cup starts in a few days, and as an Amerocentric white boy who grew up with football and hockey, I know jack shit about soccer.  As such, I adopted a totally random National Team to support every four years when I was a kid, and that random country was Argentina.  In that spirit, let's take a look at an equally random Argentinian metal band.  Straight outta Buenos Aires, I present to you, Dragonauta.

I have no history with Dragonauta, I was only introduced to them last week.  In this last week, I've probably spun CabraMacabra twenty times.  This isn't something that should have set the world on fire back in 2006 and was unfairly forgotten or anything, but it's undeniably an addictive album, and I just can't help but go back to it quite frequently.  The best laconic review I can muster would be "The Melvins if they bought laced weed from Satan."  The genre tag on MA lists them as "Psychedelic Stoner/Doom Metal" but I'm not sure I'd agree with that on this album.  It's very sludgy, which tends to go hand in hand with stoner and doom metal, sure, but the pace tends to stay surprisingly high, taking the punky elements of sludge classics and replacing them more with straight ahead thrash metal.  I'd also say it's less "psychedelic" and more accurately "schizophrenic", as the band tends to take on an almost frenzied approach to everything, like they're just confused and angry and want to lash out at something.  As a result the music is simultaneously hazy and sluggish while being focused and ferocious.  There are some out-of-left-field progressive moments as well, with the first half of "Funeral magico" being a quiet, almost Pink Floydian section.  "Abducido" and "En el futuro ya no habra piedad" toy around with these sections as well but it's definitely most prominent on "Funeral magico".

CabraMacabra tends to err away from the "Honey Bucket" style of sludge/thrash and lands closer to classic Sabbathian stoner metal as the album goes on (check out "Experienciar"), which is also pretty Melvins-y in its own right.  But honestly, the main reason I keep comparing this to those Seattle weirdos is because the vocalist here sounds like a methed out King Buzzo who is perpetually stubbing his toe and invoking Satan about it.  There's a culpable sense of malice absolutely smothering his voice, and it helps the music itself sound so much more evil than it would have with any other vocal style.  It definitely works better with the more manic first half of the album but it sounds awesome when the band gets doomier as well.  He really is the highlight for me.

If there's any real flaw with the album it's simply that it gets to be a bit much to get through in one sitting.  It's not a super long album, clocking in at 51 minutes, but with how in-your-face it is for most of the runtime it gets to be pretty exhausting, despite the variance in tempo and continuously high level of excitement.  The tracks tend to run together as the album grinds along, so the more ripping tracks like "Transmutado" and "Dioses del submundo" stand out more once it's over and you recall the album from memory.  Overall it's not really a big deal though, because on the whole it's a very dangerous and feral sounding album that spans across a few different subgenres and ties itself together with those completely insane vocals.  It's a fun romp, and I'll definitely be coming back to this.  After all, I haven't been able to stop listening to it for a week now, and that's a pretty rare quality for me nowadays.