Resurgency - No Worlds... nor Gods Beyond 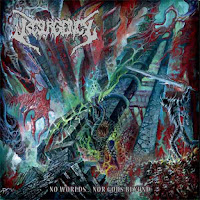 Unnecessary ellipses are IN this season!

If you're looking for something groundbreaking, you're barking up the wrong tree with Resurgency.  There's nothing inherently wrong with these guys, they're quite good all things considered, but I can say with absolute certainty that I won't revisit No Worlds... nor Gods Beyond after I publish this review.  I may not have kept up the review-a-day pace I had started with when I started focusing on shorter reviews, but my listening has seen a sharp uptick regardless, and if it's taught me anything it's that there's a lot of exceedingly average death metal out there in the world today.  Resurgency is another one such example.

Musically this album is solid, with an extremely strong Morbid Angel vibe, more the ripping intensity of Covenant than the churning morbidity of Blessed are the Sick or Gateways to Annihilation.  One thing I can give to the album's credit though is the energy.  Resurgency are intense as hell, which is great since death metal works best when there's some fury behind the grimy riffwork.  Very rarely does the band slow down and give the songs time to breathe.  As a result the album is a blistering joyride from start to finish, with each song being short and to the point, loaded to the gills with twisting tremolo riffs and frantic drumwork.  Nobody really stands out in terms of instrumental performance but that's not a dealbreaker since they're a very cohesive unit and this style of riff heavy death metal doesn't need superstar players anyway.

I'm struggling here because I've basically just described 70% of all death metal bands active in the last five years.  That's Resurgency's biggest problem really, and it's not even entirely their fault.  They're an opener, not a headliner.  I'm sure you'll see a short run through Europe with them supporting more iconic acts but they're not going to break out at this pace.  All told, it's good stuff anyway, and I don't feel like I wasted any time jamming this.  If you're just looking to bolster your collection, this isn't exactly a bad choice.