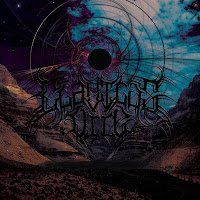 Get over here, mutt!

Clavicus Vile are a pretty cool example of tech death that straddles the line between balls-first hyperspeed riffery and completely unhinged, anarchic chaos.  This two track demo from 2012 showcases this seamless insanity with aplomb.  I'm sorta picky with my tech death, and these guys may not scratch the itch like Neuraxis or mid-era Hour of Penance or something, but they're very serviceable and show a unique talent in making structureless noodling actually entertaining to listen to.

This is done mostly through, frankly, just good songwriting.  Every time they sound like they're coming apart at the seams and just flailing all over the high strings with no end in sight, a crushing riff will barrel in stage right and smash the previous section to smithereens.  It's very satisfying to hear such young dudes understand what makes this style work so well, because when you take the Rings of Saturn route and just shred for a half hour, you encounter the same problem Yngwie Malmsteen always suffers.  It descends into nothing but flashy nothingness, and completely unimpressive spectacle that should by all means be mindblowing in its technicality and precision.  Clavicus Vile avoids that by simply keeping the foundation of death metal strong underneath all the jazzy technicality.  It's a simple trick, but a lot of new bands totally drop the ball in this regard.  "Corporeal Obelisk" basically flip flops between the two approaches to tech death nowadays, but it's spaced out and executed so well that it rarely sounds like a jarring clash of styles just for the sake of it. The drums are also unique in their clangy cacophony, instead of the super clean triggers most bands utilize.  This is likely just a consequence of budget but it does help the demo stand out a bit beyond the home-state advantage and videogame references that always catch my eye.

There's not much else to say really.  Clavicus Vile deliver ten minutes of frantic tech death that manages to add some extra theatrics to the subset of the genre that I love and some grounding brutality to the subset I find overblown and excessive.  Keep your eye out for 'em, they may get lucky and somebody with more clout than I could notice these dudes, they're certainly right on the cusp of something wonderful.