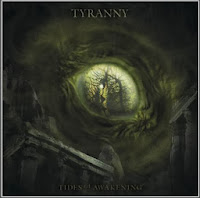 An album for the mentally ill

Remember back in my review for The Crimson Idol where I mentioned that when I'm feeling blue, I tend to just listen to depressing music to wallow in for a time?  And do you also remember my review for The Day It All Came Down where I basically wrote a really roundabout suicide note and framed it around a review?  Well I'm in that kind of mood again.  And since I don't drink or beat my children, I purge my negativity and cope with sadness by writing reviews about depressing metal albums and covering them with swaths of esoteric imagery.  The culprit today?  The ever absorbent Tides of Awakening, the only album from Finnish undertakers, Tyranny.

As far as I know, this is the first funeral doom album I've ever reviewed (depends on if you count Year of No Light I suppose), and one of the reasons I've always held off on writing about this genre, despite liking it plenty, is because I feel like once I write one, I'll have written them all.  It's a good style, no doubt, and it's all about mood and atmosphere as opposed to riffing or melodies or something, like most of the high octane music I listen to.  But the problem with the genre as a whole is that you can use the same four words to describe every album, and then just fluctuate how well each band handles every element.  We know it's gonna be atmospheric, we know it's gonna be slow, we know it's gonna be based in doom/death, we know the vocals are going to be distant and deep, the only new information I can provide is whether or not each of these elements are handled competently on whichever album I'm talking about.

As far as I'm concerned, Tyranny handles everything marvelously.  And yet, at the same time, I don't even really know what it is that they do at all.  I mean, I can gather that there are Lovecraftian themes, but I don't give a shit.  I hear they take big heaps of influence from genre progenitors like Thergothon and Skepticism, but I couldn't care less about that if I tried.  All that really matters to me, and all that should matter to you, is that Tides of Awakening is monumentally heavy, and completely suffocating in its unbelievably oppressive atmosphere.

The songs themselves don't do much to differentiate themselves from one another, but once again that's not really the point.  "Coalescent of the Inhumane Awareness" has a really haunting lead melody, but that lead melody doesn't sound all that different from the rest of the melodies to be found, so I wouldn't feel right singling it out like I just did, but I'm a hypocrite in the throes of crippling depression rambling about depressing music.  The point is that when it comes to the actual musical aspects, this is exactly what you'd expect.  Glacial pace doom/death riffs underneath layered backing synths and melancholic, haunting lead guitar.  What I love about this guitar is that it doesn't ever come off like a guitar normally would, it instead manifests as this completely different entity; a completely abstract spirit that sends down gentle coos of reassuring warmth that get twisted into demonic abominations by the time they reach your ears.  It's both pleasant and unnerving at the same time, and it works towards the overwhelming atmosphere in ways I previously couldn't imagine.

It's really the atmosphere that makes this album work.  If I'm being totally honest, it's the only element that I can even recall or appreciate about it in most instances.  Here I am giving a high score to an album that I'll fully admit to not even knowing the track names for (and there are only fuckin' five of them), but it's because this doesn't stick with you for the same reason something from a more energetic genre will.  I'm never going to hear a part in any given funeral doom album that makes me go "Whoa shit, that was awesome, what track was that?" like I would with an album in pretty much any other genre.  That's a characteristic of funeral doom as a whole to me, and Tides of Awakening just exemplifies it.  From start to finish, this is basically one monstrous plateau of misery and helplessness.  Sure, each song builds and climaxes appropriately, but at no point does the music take me anywhere other than the loneliest place imaginable.  It's basically just one huge, hour long experience where you just sit at the bottom of the ocean while the weight of all the water pushes down upon you, and you struggle for air for a short while before understanding the cosmic futility of your perseverance, and then simply waiting to lose consciousness underneath all the pressure.  The entire experience is just one long funeral dirge, wherein you spend all of the time alternating between reflecting upon the mistakes you made and then cursing yourself for allowing it all to end with those loose ends still hanging.  I can't even call this a "journey" like I tend to when trying to be vague and metaphorical with my description, because it's very static.  At no point do I feel like my story is progressing, I'm just sitting here, being pummeled ever so slowly by the increasing weight of each wave.

See, I feel like the metal album that most accurately sums up the frustration of bipolarity, depression, anxiety, and most other self-crippling mental illnesses of the sort is City by Strapping Young Lad.  Hell, there are even other albums within this very genre that I'm sure deal with much more emotional themes than whatever dystopian ballyhoo Tyranny drones on and on about here, but the general mood is almost perfect for what this kind of lethargic self loathing represents.  When you're in a spot where the entire world is grey, and every attempt to move forward is met with your own body resisting you, sapping your will to even bother trying to improve yourself since you know that swimming ten feet upwards isn't going to get you out of that ocean, Tides of Awakening is the album that is playing in your mind.  It's just dirge after dirge after dirge, reminding you that you are worthless and weak and will never get ahead as long as every time you look upward, you're met with miles of crystal clear water.  You can see the surface, but my friend, you are not getting there.  The vocalist may be deeply roaring about Yog Sothoth's pubic lice for all I know, but in my mind it's just the disgruntled bellows of my subconscious reminding me of all the mistakes I've made in my life and why I'll never see better days.

I can't keep doing this, all I can do is constantly compare the album to like being trapped under an ocean and then hamfistedly relate my own psychoses to it.  Most people who suffer from these same issue (the sads and the mads) can understand where I'm coming from, and can likely relate to the album in this way as well.  It's atmospherically debilitating and as emotionally weighty as a metaphoric iceberg.  The four traditional songs are crushing and monumental, and the ambient outro is reflective and moderately horrifying.  It's the extracurricular aspects of the album that makes Tides of Awakening so effective to me.  It's the fact that beyond all the suffocating atmosphere, there's a vivid image of myself drowning in my own misery.  Everything is overwhelming and I, personally, drown every time I experience it.  This is an album (and admittely, a review) for me, not for you.  This works because I can relate the smothering atmosphere to my own fears, it works because I react to certain stimuli the way that I do.  If you don't share these same problems, then this just simply isn't going to connect with you on the same emotional plane that it does for me.