Heavatar - Opus I: All My Kingdoms 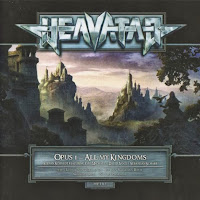 The Ballad of Diarrhea Girl

Let's talk about my sex life for a minute.

Yeah yeah, the mental image you're currently conjuring of me touching any part of a woman with my tongue is either repulsive or hysterical, depending on how low your self esteem is, but like most other men in the world, I have a wiener and I like when other people touch it.  The point is, a couple years ago, there was this girl I really, really liked.  My friends know her as Diarrhea Girl (if you want to know the story behind that moniker, feel free to preorder my first book, Poor Decisions, Worse Timing: The Collected Tales of an Unfortunately Hilarious Doofus), and in the realm of purely physical looks, she was... decent.  Most of the time, you could describe her as cute and that was about the extent of it.  She had an illuminating smile, but she tended to present herself as frumpy.  She didn't take much pride in her appearance, she looked like she belonged in a yogurt commercial about 90% of the time.  Sweatpants, hoodie, hair tied up, no makeup, you know the deal.  There were other things about her that made her irresistible to me, but based on pure physicality, she was never going to be cast as the woman in the red dress in The Matrix.  Most of the time.  On occasion, and I only saw this firsthand a few times, she would "get all purty" as she would call it.  Man, when she put effort into looking good, she would just blow me away.  All the greatness I knew she hid underneath the layers of her constant laundry day outfits would just smack me in the proverbial jaw with the force of one of those Punkin Chunkin torsion machines.  Our relationship may have ended on a bizarre, diarrhea scented note, but that's one of the biggest memories I have of her, just how stunning she could look on the extraordinarily rare occasion she would make an attempt.

Apart from simply wanting to plant the visual of me wrestling with my libido through a smog of fecal vapor inside your subconsciousness, this relates to the album at hand because Heavatar is an exercise in painstaking averageness punctuated sporadically with moments of gorgeous brilliance.  This band's existence initially got my blood pumping purely because I'm one of the weird guys who really likes Van Canto beyond the gimmick.  Yeah, their covers are almost always the best songs on any given album (with the exception of Tribe of Force, a legitimately excellent power metal album all the way through), but I find the songwriting to be pretty solid and the arrangements to be interesting at the very least.  Despite this, I've never actively found myself seeking out any of the member's other projects, so hearing lead "guitarist", Stefan Schmidt, behind the mic as a lead vocalist was a sweet prospect for me.  Heavatar is presented as a super group of sorts, although that's pretty misleading considering the rest of the band consists of some dude who played in the pre-Van Canto band, Fading Starlight, the most inconsequential member of Powerwolf, and Jorg Michael, who was awesome in the 80s and 90s with Avenger/Rage, Running Wild, Grave Digger, and others, but hasn't done anything worthwhile in roughly two decades (unless you like Stratovarius, in which case I can safely assume you suck at music).

The band sets the stage in grand fashion, "prophetically" (read: naively) subtitling their first album Opus I, but I must admit that the opening track, "Replica", does an excellent job of conveying the epic attitude the band is aiming for.  It's a very operatic and bombastic tune, devoid of some of the typical power metal crutches like googols of orchestrations, but still retaining the over the top choirs and gesticulating-inducing chorus.  This is the kind of power metal that I just eat up.  It's huge and magniloquent and shows absolutely no shame or restraint, packed to the gills with swagger and machismo.  It's unbelievably catchy and at the same time very meaty and heavy with a healthy twist of neoclassical guitar lines; the kind of power metal that people who hate power metal can enjoy, not unlike a not-quite-as-punishing Persuader or a less boring Morgana Lefay.

But after that?  Be prepared for a host of completely unremarkable, pedestrian, uninspiring, paint-by-numbers power metal.  It's hugely disappointing because "Replica" shows how intricate and entertaining the band can be, but after that they all just kinda sit back and mechanically churn out very bland and faceless songs for most of the rest of the album.  Tracks like "Elysium at Dawn" and "Long Way Home" just happen with utterly zero consequence.  Schmidt has a really neat voice, being deeper and rougher than most singers the genre is so saturated with, but he rarely puts it to good use.  In fact, it's best when being complemented by the choirs, which shows that the band could probably stand to be a little more cliche for the sake of some more entertaining songs.  This ties into my opening because All My Kingdoms isn't bad, but it's pretty unremarkable if not for the cool frontman.  Basically it has a great smile, but the other wonders that surface from time to time are largely hidden by very plain clothing.  I mean really, the title track is completely forgettable, which makes me wonder why on Earth it's even the title track at all.  Shouldn't the song you name your album after be... I dunno, special in some way?  No?  Just a fully unremarkable power metal tune with nothing interesting in it?

I'm being sort of mean here, because despite "Replica" being far and away the best song, there are other good moments.  "Luna! Luna!" is a pretty great song on the whole as well, and the chorus and pre-chorus of "The Look Above" are very exciting and evocative (particularly that "We are running faster!" part), but otherwise there's almost nothing to be found that could raise the seasoned power metal fan's pulse.  Lots of low chugging and soaring choirs, but they're rarely put to good use.  I can guarantee you the band has probably made comments in interviews like "We have great chemistry, the songs came together very easily, they almost wrote themselves, yadda yadda", and I totally believe that, because if a song could hypothetically write itself, it'd probably sound like "Born to Fly".  It's just not exciting, it feels like the band didn't challenge themselves at all and just wrote a bunch of very safe, surefire tunes and called it a day.  With moments like the choruses of "Replica" and "Luna! Luna!", it's pretty clear that the talent contained within the band is very capable of meshing together and crafting some very memorable songs, but it just... never does.

At one point, All My Kingdoms was actually in my Top 13 for the year, but the more I listen to it, the less passionate it feels and the more faceless it becomes.  This still gets a good score because, as I said, it isn't a bad album, not by any stretch of the imagination, but on the strength of songs like "Replica", I could compare the band to heavyweights like Blind Guardian or Kamelot, but with the rest of the album it just kinda falls into an echelon slightly above bands like Power Theory and Torian.  I guess it's worth a listen, the Mattie Jensens of the world will lap this up if nothing else, but for me, it's a very average album on the whole.  Just like Diarrhea Girl, it's cute, but generally nothing you'll dream about inseminating in the bathroom of a classy restaurant (except of course for the rare occasions where it takes pride in its natural gift and presents itself as such).

Also, the closing track, "To the Metal", is goddamn stupid.  It's clearly about how metal is taken too seriously and we all need to remember to have fun with it, which is a message I champion frequently (hence my vocal love of Powerwolf), but it's presented in a very blisteringly stupid way, being largely a solo campfire type song with Schmidt yelling like a goon.  It's cool to be self aware, but just because you know you're making a joke doesn't mean you're allowed to be shitty.