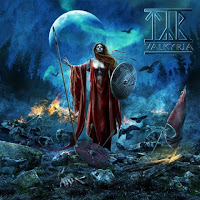 Runes carved to my memory...

Is... is it safe to officially declare Tyr a sellout yet?

I mean let's face it, the days of the longwinded prog epics and four minute guitar solos backed by orgiastic vocal harmonies and poetic, traditional Faroese lyrics are pretty much long gone now.  They have been for five years now.  The calming acoustic passages and soothing melodies and progressive digressions have been stripped down more and more ever since Land went over the top with two 10+ minute tracks.  I feel like they realized that these songs were difficult to write, difficult to arrange, and difficult to play.  The first two can make the writing process a stressful bitch, and the last one can make live renditions of said songs not transfer over very well.  Now, I saw Tyr twice around the Land era, and I thought they knocked it out of the park both times, but the second time I saw them, they debuted "Hold the Heathen Hammer High" off the then-upcoming By the Light of the Northern Star.  By a long shot, that song was the highlight of the set.  It was so simple in contrast to what the band was known for, it was a very aggressive song with a much more urgent and pounding rhythm than we fans were accustomed to, and it worked brilliantly.  Come a few months later when the album dropped, it sounded just as great on record.  That album showed Tyr experimenting with shorter, punchier songs; and if you ask me, the experiment was a resounding success.

Two albums and four years later, Tyr has unleashed their hotly anticipated seventh (and first for metal monoliths, Metal Blade) full length, Valkyrja, and it's... well, about the third iteration of By the Light of the Northern Star.  It seems like the band realized that while Eric the Red may be their initial claim to fame, the simpler style showcased on that wonderful 2009 album really helped set them over the top and up their exposure to casual fans of prog, folk, and power metal.  I claimed Eric the Red was really overrated back in the day, and I still believe that to an extent, but there really is a lot to like within that album and there are no less than like five or six absolutely masterful songs to be found, and with the benefit of hindsight I've grown really fond of the album purely because it's been made clear that Tyr never plan to revisit the more melodic and progressive side of their signature sound again.

Now with that said, this simpler, more rocking, less folking, more power, less progressive style is something that Tyr actually does indeed excel at, so Valkyrja may be disappointing in the sense that we're not getting any truly new ideas from the band and it's blatant selloutiness (it's a word now, bite me), but it's still very well written and well executed.  Heri Joensen's voice may have gotten a bit sandier over the years with the new aggressive style, but his ear for melody is still damn near unmatched, the the harmonies are just as sublime as they've always been, it's really only the subject matter that's shifted dramatically over the last few albums.  Yeah, it's been made clear that Valkyrja is an album about women, or more specifically, the way men can turn into idiotic, slobbering Tex Avery cartoons they instant they get a nanometer of cleavage or how they can put their entire lives on hold to cater to the whim of the latest cute girl in math class with a pretty smile (obviously I can't relate to either of these scenarios, I'm too busy knocking back Dr. McGillicuddy and banging your mom).  Luckily, unlike some other bands I've written about in the past (looking at you, Arsis), Tyr manages to handle the subject matter with an astounding amount of class, keeping everything grounded with their trademark Nordic flavor, obviously sticking to themes like Valkyries, wars fought in their name, and spirit women blowing you in your sleep.

Yeah, "Mare of My Night" is a little distracting in its explicitness.   Most of the lyrics here are as poetic and metaphorical as they normally are, but this one is just as upfront and downright raunchy, and it's uncharacteristic for the band and really, really hard to ignore.  Yeah, I get it's based off an old legend and explains where the term "nightmare" even comes from (though most dreams I have of this nature can hardly be considered nightmares (unless we're counting the one where Rosario Dawson turned into a dog halfway through)), but it still stands as possibly the only time the band ever dropped their trademark tact and class for something bizarrely crude.  Now, I don't mean to come off as a missionary-in-the-dark-purely-for-procreation style prude here (I mean come on, I'm the guy who invented a sexual maneuver combining cunnilingus and a jackknife powerbomb (I call it Erectile Destruction)), but hearing Heri belt out heartfelt lines about being sucked dry are just fucking weird, okay?

That aside, how's the rest of the album stack up?  Pretty darn well, I'd say.  It's basically nothing you're not expecting at this point, which at one point I'd consider a massive slap in the face considering the band in question here, but they've proven themselves to me so it's really not as big of a deal as I may have initially made it seem.  The main reason for this is because the songs are just flat out catchier and more memorable than they were on The Lay of Thrym.  "Mare of My Night" is very catchy and fist pumping, reminiscent of the marvelous "Hold the Heathen Hammer High", and the other two singles, "Blood of Heroes" and "Another Fallen Brother" follow the same vein.  This raises the point of the album being somewhat samey, essentially being mid-paced, double bass driven, nebulous, Amon Amarth styled metal songs with incredibly charismatic vocals, impressive guitar soloing, and hearty hooks and grooves.  This isn't untrue, but there are a few standout spots that break the mold, like the duet with the chick from Leaves' Eyes in "The Lay of Our Love" or the basically straight up power metal track and definite standout of the album with "Lady of the Slain", or even the hearkening back to longer, more developed and complex songs like the title track.

It's unfortunate that I sense a bit of pop structuring in the sense that this album is front loaded with a ton of great songs in the beginning before starting to get stale in the middle with two standouts at the end, because this means that Tyr's penchant for mid-album filler is still clearly prevalent.  It's also unfortunate that tracks that start off interestingly or more epic and creative than the rest ("Grindavisan", "Fanar Burtur Brandalijoo") just end up reverting to the tried and true "Amon Amarth with folk melodies, clean vocals, and less heaviness" formula they've been (admittedly successfully) milking for three albums now.  So yeah, with the theme of women being so highlighted, the pop structuring, the fact that non-metal fans can easily like this just as much as people like me who also listen to 7.H Target, really make this clear to me that Tyr is just a very musically accomplished pop metal band at this point.  Now, just like with other bands like Amon Amarth and Children of Bodom and other bands I feel like the label can apply to, this isn't an inherently bad thing, as Valkyrja is still a good album, in fact I'd say it's a solid tier above The Lay of Thrym and only marginally worse than By the Light of the Northern Star.  The sameness gets a little tiring and the songs are definitely less interesting than the band's early era, but I'd argue that a majority of them are more engaging, so it's still a very good album that I don't mind recommending.  This isn't going to be making my year end list or anything, but it's solid, and at the very least it's worth hearing for "Hel Hath No Fury", "Another Fallen Brother", and especially "Lady of the Slain".


PS - The covers of "Where Eagles Dare" and "Cemetery Gates" are both good, though the latter is slower than the original, and both of them showcase that while Heri is a marvelous singer, he doesn't really have a commanding upper range, and the climactic high notes of both songs feel kinda flat.
Posted by Bastardhead at 8:09 PM

Email ThisBlogThis!Share to TwitterShare to FacebookShare to Pinterest
Labels: Fuck I don't know what to really call Tyr