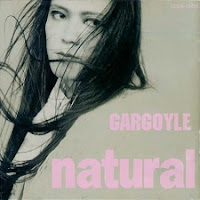 I've done my best to avoid mentioning Gargoyle's image up to this point (though it's damn hard not to when it came to that fucking eyesore of an album cover on Tsuki no Toge), but Natural is an album that completely upends it and absolutely begs for it to be addressed.  See, the album cover this time, coupled with the title, are references to the fact that the band had at this point decided to shirk that legendarily over the top image.  Gone are the elaborate costumes and in are the stripped down, "natural" looks of the band members.  Was the point so that people could focus less on the looks and more on the sound?  Were they trying to shed their past skin while they forged a new direction?  They've probably explained, but I can't understand that silly moonspeak so I'm just gonna make up my own theory about Gene Simmons suing them.

Now, the aesthetics are drastically different than what they were before, does the music follow suit?  Well... you see...

Natural opens up with "Natural", which is... uhh, basically an acoustic campfire song with an admittedly creative rhythm section.  It's a very innocent, sugary, poppy song and is miles away from what the band was/is known for.  Think of something like that Mr. Big song that was huge in the 90s, but with ethereal, flittery keys in the backgrounds an Kiba's bizarre warble contrasting with very soft backing vocals.  I'll give it this, it is at the very least an interesting song, and an interesting choice to open what will soon prove to be a very interesting album.  I see this as Gargoyle making a definitive statement.  "This is who we are now, nobody can change us, and we will embrace this new sound, whether you follow us is of no concern to us at this point".  It's one of the most brazen sellouts that nobody except the Japanese and a very certain niche community of weirdos in the outside world had ever seen.  The large boner of thrash had been prepared, and it had gone flaccid for Natural, instead opting for a poppy new direction with obvious accessibility in mind.

And then the rest of the album happens.

The second track, "Shin I ~Providence for Decadence~" figuratively picks up the title track by the ankles and slams it against a tree trunk.  It takes precisely zero seconds for Gargoyle to pull the rug out from under the listener and just be like "PSYCHE WE STILL FUCKING RULE".  Yeah, "Providence for Decadence" is a goddamn furious hardcore thrash song.  Seriously, it's like, Znowhite level intense during the verses.  Is it among the best thrash songs the band has written?  Not at all, but it solidifies the fact that the band isn't going to be going the route of pure radio airplay like the title track had implied, and I love it for that alone.  Further proving the band's penchant for hurling curveballs at the listener, the third track, "Samurai Dynamite", is another poppy party tune.  Unlike the title track, this one connects wonderfully, bringing back memories of the brilliant "Naidzukushi".

This does bring up an underlying issue with Natural.  It's pretty inconsistent.  It's a great album, don't get me wrong, and is loaded with classic tracks, but the variety is so absurdly wide and diverse that it takes a very specific taste to really buy into this album fully.  Granted, this is Gargoyle we're talking about, so obviously they're good enough songwriters to overcome this problem most of the time, but it's still pretty distracting how the tone of this album is all over the place.  The fun tracks like "Samurai Dynamite" and "Renaniuyuji" clash so hard with the ferocity of "Providence for Decadence", "Hajimete no Satsui", and "Nounai Jisatsu", which in turn clashes with the industrial "±0", which goes against the soaring epicness of "Kaze no Machi", and so on and so forth.  There's a lot of different stuff to be found here, and a lot of it is very, very good, but it's an odd listen, no doubt (definitely moreso than anything prior, despite them all having a wide variety of ideas involved).

So yeah, Natural is potentially the least cohesive album in Gargoyle's repertoire, but it's a good album regardless.  In contrast to how Tsuki no Toge was greater than the sum of its parts, Natural is pretty much exactly the sum of its parts.  They do most of the styles very well, with special mention being especially deserved for "Taiyou no Tsubasa ~Icarus~" for being probably the most notable example of Kiba legitimately singing.  Yeah I know right?  Turns out that when he turns off is warbly rattle, he's more than just lovable charisma and boundless energy, he actually is a very talented legitimate singer.  He has a very smooth, clean voice, and the song itself is very romantic and emotional sounding.  I'd say it's the best ballad the band had written up to this point, but considering the popularity of "Ningyou no Mori" and "Yakusoku no Chi De", I feel like most fans wouldn't agree with me on that one.  And I have no choice but to do that thing I keep doing where I single out one song to just furiously masturbate over, and the winner (?) this time is the closer, "Kaze no Machi".  I maintain that "Catharsis" is probably the best closer in the band's catalog and one of their best uplifting metal songs, but "Kaze no Machi" certainly gives it a run for its money.  It follows suit in the sense that it runs on some pummelingly fast riffs while being lifted up by a soaring lead melody and a very melodious chorus, full of emotion and power.  Seriously, in the realm of melodic heavy/thrash metal, this is damn near untouchable.  It manages to be both heavy and light at the same time, being grounded in full, crunchy rhythms while sailing above the treetops with an overtone of jubilant optimism.  It's a huge song, with these soul-molesting (in the best, sexiest way) operatic female vocals over an atmospheric intro, transitioning into a massive, soaring metal anthem.  Really, this is yet another entry into the seemingly endless Gargoylian Tome of Flawless Masterpieces.

Natural is, in a way, Gargoyle's Load (gross).  This is the album that shows them doing just whatever the hell they want to do, toying with every fleeting experimental notion that pops into their brilliantly artistic minds and just running with it.  Not all of it hits bullseye, "Chouryokusai" and "Damage" feel a bit like filler tracks to me and I just never fully got behind the title track, but there are still a ton of worthwhile classics to be found like "±0", "Nounai Jisatsu", "Samurai Dynamite", "Taiyou no Tsubasa", and obviously "Kaze no Machi".  So yeah, this is worth a look even if only for how strange and all over the place it is.  It's wildly inconsistent in tone and I can see why that could be too distracting for some, but I think the band rocks hard enough to make most of these bizarre ideas work.  Natural is really an album you should look at more as a collection of separate ideas and songs as opposed to one single unit, otherwise it presents itself like an unsolved Rubik's Cube.