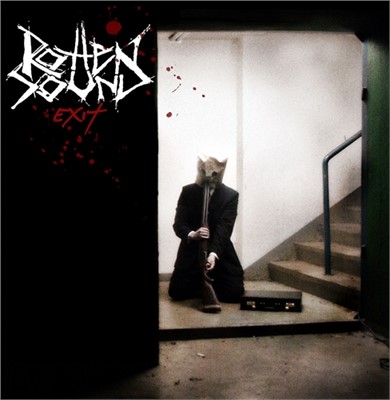 All hail the head vein!

I know very little about grindcore.  I can't listen to any one band and tell you why they are good for their style.  I have no idea what grind fans love about grind and what makes Grind Album X grind grindier than Grind Album Y.  I only grind a grindful of grind bands and I'm not even sure if they're the grindiest.  Grindcore rarely even grinds what I'd refer to as "grinding" in the first place, since it grinds at far too high of a grind to truly grind the feel of grinding some grind.

The point is that "grind" is a really stupid word, and now you all agree with me.

But no, the real point is that, while I'm not as intricately familiar with grindcore as I am with death, thrash, or power metal, I do know good music when I hear it, and Finland's Rotten Sound is damn good.  Their fourth album here, 2005's Exit, ranks as the strongest to me, and it may well be because of the splendid marriage of both sheer, nut-shattering intensity and bleak, apocalyptic nihilism.  Exit, to me, is the kind of album that angry fifteen year old outcasts would write if they actually had any idea how to properly convey their ideas.  Every track is just chock full of fast, to-the-throat evaluations of our places in society as merely cogs in the machine, the inevitable downfall of us all due to the overwhelming greed of those in power, and the depression of soldiering forward as a faceless drone weighed against the futility of trying to break free from the mold.  There's no way out, life is terrible, you know it and I know it, let's get together to demolish a house with our fists and then eat a gun.

The band gets these themes across with the utmost fervor, blasting away with a wall of sound moving at light speed, completely overwhelming you as if you're standing under a waterfall; except instead of water, it's bile.  The opening title track takes about forty seconds or so before it really starts, but when the distorted ambiance gives way, we're treated to twenty seconds of the most blisteringly fierce music imaginable.  And it never lets up from there.  Apart from the fake-out ending of "The Weak", Exit never takes its foot off the gas, and the album would only suffer if it were to take any other path.  Every last track is just stuffed to the gills with blasty poundy rippy shreddy deathgastic fuckfarting.  That doesn't make sense, but at the same time it totally does.  There are riffs here and there, and in fact this is quite riffy for grindcore (based on my admittedly loose grasp on the genre), but it takes a back seat to the overwhelming intensity.  There's pretty much no room to rest here, and it's just a constant barrage of blasts and shouts, but really what else could this possibly consist of?  There are some cool flourishes like the drainpipe gurgle at the end of "Maggots" or the bass break in "Mass Suicide" or the mosh riff in "Western Cancer", but they're relatively few when weighted against the brick wall of clipped relentlessness.

I know that all comes off as kinda vague, but there's only so much you can say about Exit.  It's bleak and nihilistic and just takes a really balls out aggressive approach to the themes presented.  The world sucks, and sometimes you're not just sad about it, you're fucking pissed about it, and that's what Rotten Sound allows you to do.  Exit is the soundtrack for lashing out against the frustrations of everyday life and just taking absolutely no prisoners in your rampage.  There's nothing held back, and as a result it's actually kind of one-dimensional, but this approach is so good that I find myself not caring.  It's fast, unrelenting obliteration, and is a perfect album for venting your stress (aka: "punching shit to pieces while screaming your head off").

Email ThisBlogThis!Share to TwitterShare to FacebookShare to Pinterest
Labels: Grindcore