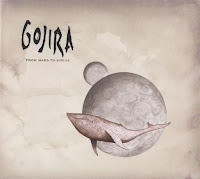 Zakk Wylde in a tweed blazer

Gojira is one of the most random heavy bands to completely catch fire and take off in the mainstream metal press.  On one hand I kinda get it since they sound like a conglomeration of three other huge bands in that same sphere, sounding like a mix between a slow Meshuggah, prog-era Mastodon, and Devin Townsend's heavier solo works like Terria.  The problem for me is that they sound like a worse version of all three of those bands, since Meshuggah works best when they kick the tempo up, Mastodon was infinitely superior as a kinda-sludgy outfit with a fuckload of hooks, and Devin is at his best when he's leaning fully into chaotic metal or calming ambient/prog while his more blended work tends to be hit or miss.  Gojira is the perfect trifecta in that regard, created in a lab to appeal to bearded metal journalists in coffee shops while maintaining an undeniable weight to their riffs.

The problem is that these riffs suck.  At least on From Mars to Sirius (admittedly I haven't bothered listening to their more recent albums simply because this one is such a turnoff) they tend to stick to simplistic chugs and squealy harmonics and not much else.  They tend to shy away from cliche power chords I suppose but they replace them almost exclusively with dissonant clangs and drawn out ringing chords that I think are supposed to sound ethereal but ultimately just sound confused.  This hyper specific "dumb guy gets a smart job" style of riff writing winds up turning every song into a midpaced slog that feels like it never ends, which is only exacerbated by the hour long runtime.  I don't want to harp on them too hard simply for their music not being particularly complex but holy shit really pay attention to "Ocean Planet".  It's like five and a half minutes long and features a whopping three riffs, two of which are more or less purely made up of unchanging quarter note chugs.  The closest thing to a hook they have is the verse riff, which repeats so many times that my eyes seriously glazed over when I tried giving it my full attention.  That pinch harmonic gets repeated thirty fucking times throughout the song, which doesn't sound like a big deal since who cares it's only one note, but trust me when I say it's the central feature of the song, the only thing that gives it some sort of identity, and it's just one fucking squealy bend that sits in the middle of the same riff in the same place with the same lead in palm mutes every fucking time.  It is absolutely agonizing.  Also keep your ears open for that pick scrape/rake thing they do in this song.  It shows up in like six other tracks and just sounds like when you mess up in Guitar Hero.  Maybe it feels unfair to rag on a band for reusing techniques throughout an album, especially since metal as a whole is so heavily dominated by bands that never graduated beyond palm mutes and power chords, but at least those cliche bands are playing different notes with those basic techniques.  This is more akin to putting the "Master of Puppets" riff in every single song.  Not as a leitmotif, but because the song needs a thrash riff at that particular point and it happens to be the only one you know.

The rest of the album really doesn't fare much better.  Their only saving grace is the absolutely undeniable heaviness they carry.  "From the Sky" switches things up by focusing on a tremolo riff instead of a chug, and it's ultimately just as boring as the rest of the album but I'd be lying if I said it didn't feel like getting brained with a bag of hammers.  "Flying Whales" seems to be the most iconic song on the album, and honestly I think that's pretty well deserved since it's the only one that moves forward in any capacity and switches things up as it goes, deftly weaving between Leviathan era Mastodon and soaring Townsend splendor.  It's the only song that justifies its runtime and winds up being pretty good in spite of itself.  That smothering weight can't save the rest of the album though, and it winds up being a brief respite in the middle of the album that showcases the correct way to make all of these elements work.  Everything else is just neverending chugs and drums that somehow follow the guitars almost perfectly.  I don't think it's exactly fair to blame an album simply for not being something, but the fact that this is seen as an important album in modern prog metal is absolutely baffling to me because these riffs are as simple as fucking Pantera.  You can't fool me by making the actual chords jangly when the meat of what you're doing is just "5 Minutes Alone" but lamer.  The only other exception is the closer, "Global Warming", but I'm not even kidding when I say it has the exact same tapping melody playing over the top for a solid seven and a half minutes without breaking. Come on guys even when you do something different you do it for way too fucking long.

I don't even want to talk about this anymore.  From Mars to Sirius is just boring as fuck and that's about all there is to say about it.  It slogs on and on through the same handful of tricks for a torturous amount of time and genuinely gives me a headache to listen to.  I can dig simple shit, I think Amon Amarth used to be absolute titans when it came to making the most basic beginner level riffs sound like the coolest shit in the world, but Gojira absolutely misses the mark.