Svarttjern - Shame Is Just a Word 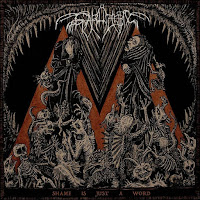 I didn't want to start the year off on mediocrity because that just seems like a bad omen, but I already reviewed the new Jordablod for a different site (this is the real reason my productivity slowed down around September, if nobody noticed) so I guess we're stuck with Svarttjern.

That's being a bit unfair, in all honesty, because Shame Is Just a Word is pretty solidly good, if unremarkable.  Svarttjern has been toiling around for a while, as this is their fifth album and more than half of the band also plays in Carpathian Forest (in fairness they are all the three shmucks who aren't Nattefrost or Vrangsinn, though they are original members here who have been around for fifteenish years).  This certainly sounds like a band that's been around for that long, but my problem with them is that they're about as middle-of-the-road as I can imagine.  Norwegian black metal seems to have been the easy king of the genre in the early days of the 2nd wave, but ever since the turn of the millennium I've found this particular scene to be one of the least interesting, and Svarttjern is a good example of why.  There's nothing wrong with Shame Is Just a Word, but it brings precisely nothing new to the table and seems pretty proud of itself for doing so.  You could argue they're just sticking to their guns/strengths, but on a personal level I guess it just doesn't interest me to play by the rules unless you've got some X factor like 1349's absurd level of intensity or Taake's impeccable songwriting skill.

Svarttjern reminds me of Keep of Kalessin, and that's probably a weird comparison simply because I have no idea what Keep of Kalessin sounds like nowadays.  I don't think I've listened to them since 2008 or whatever but this is pretty much exactly what I remember them sounding like.  Very polished production and very slick presentation but riffs that feel like they were written via algorithm and raspy vocals that are very good for the style but unfortunately lack charisma.  There's value in a good throwback every now and then for sure, but I also don't begrudge myself or anybody else for wanting a bit more out of art.  This pushes no boundaries and breaks no rules, and the only thing about it that helps it stand out in any way is that there's a bit more of a heightened influence from thrash than would be usual for a band of this style, but even then that may just be my brain playing tricks on me due to the (frankly awesome) cover of "Bonded By Blood".

So Shame Is Just a Word is a decent album full of decent songs with decent riffs but utterly lacking in atmosphere or mystery.  The best song on here is the one that A) isn't black metal and B) was written by a totally different band 35+ years ago.  I'm probably sending mixed messages here because I'm honestly walking away with a positive impression of a solid throwback of a classic style, but it doesn't elicit any real emotion out of me and completely evaporates from my memory as soon as the album is over.  Check out "Melodies of Lust" if you're curious.  It's the best original song here and it's probably simply because it's the longest and has the most time to develop, but it's a good representative of the album in a microcosm.