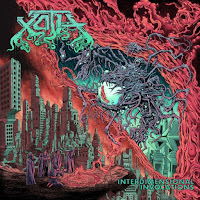 This was a hard one to pin down aesthetically, while at the same time being super obvious.  On one hand, between the band name and the weird tentacled eyeball on the cover, it was pretty obvious there'd be some Lovecraft influence involved here, but with the mechanical looking portion of the logo and the song titles I also figured this would be very sci-fi influenced (not that Lovecraft never dabbled in that himself but it's not necessarily what he's known for), and the general look and feel of everything pointed to some kind of Rings of Saturn styleded "aliencore" stuff where it's just absurdly techy and wild.  But if you don't overthink it like I did, Xoth is very much what it says on the tin.  Their logo is a blend of those two things because musically they're a blend of those two things, and the colorful album art is indicative of the almost comic book style over-the-topness of the whole thing.  And frankly?  They absolutely fucking rule.

I'm just gonna spoil the ending a bit right at the start and say that Interdimensional Invocations is actually one of my favorite releases I've heard all year, which is extra impressive considering it's death metal.  Obviously death metal is generally my favorite subgenre but it's been lagging behind trad and black metal in 2019, so for this relatively unknown group out of Seattle to come out and absolutely fucking trounce most of the heavyweights this year is definitely notable.  I think a big reason this stands out so much is because it takes a lot of influence from bands that aren't ripped off nearly enough, namely Mithras and Sarpanitum.  Interdimensional Invocations is bursting at the seams with screaming leads and hooky melodies all over the place, constantly flying over the blast heavy necromancy underneath.  This is very flashy, and they do it in such a way where they don't sound like guitar nerds jerking off over how fast they can sweep.  Instead each and every song is just incredibly solid hyperspeed death metal that just so happens to have ear catching fretboard abuse on the top.

While they don't neglect the meaty riffs here, they're obviously secondary to the spiraling melodies.  I hear a lot of The Sound of Perseverance era Death in here, but they're not quite technical and wanky enough to be compared to Decrepit Birth (another great band that takes influence from there).  Those almost power metally leads of late era Death are filtered through a Mithras mindset.  It's kind of hard to explain if you aren't familiar with them or their sister project Sarpanitum, but basically what that means is that the leads take center stage over the rhythmic element of the band and they tend to be a bit more simple than the tech death wank you'd usually associate with such a description.  Check out "Mountain Machines".  That main lick is very simple, it's just a walk up and down the fretboard with some bends/slides and that's it, but it's so epic.  It sounds huge, like just sitting in my chair and listening to this in my living room makes me feel like I'm about to fight the final boss and the future of humanity is on the line.  "Melted Face of the Soul" and "Plague Revival 20XX" are exactly the same, and the solo in "Haruspex" is pure late 90s Schuldiner.  So even when it's more complex, the leads are all gigantic and exciting.

That's not to say the rest of the band is lesser than the guitarists of course.  Ben Bennett's (best known for briefly playing in Warbringer during their best era) bass is pangy and would be distracting in most contexts, but here the whole thing is so high-flying and wild that it just adds to the absurdity of the whole thing and I'm in love with it.  I know "bass just following the guitars" is par for the course in metal today, but even then it'd be really impressive if he just did that, but he doesn't.  He floodles and bloodles around all over the place but it manages to not be distracting with the hundred other things going on at once.  Everything comes together extremely well in the end and honestly there isn't one moment of Interdimensional Invocations that I don't love wholeheartedly.  This is one of those bands that was seemingly created specifically for me.  Hopefully you love it as much as I do.