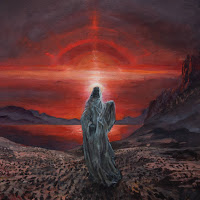 Nothing else can stop Meteor

Honestly I feel like the main reason Forlet Sires hasn't caught on the same way Tchornobog has in recent years is purely because they lack Markov's innate ability to relentlessly promote, because this Swiss quartet is playing more or less the exact same idea with a very similar level of quality and yet seems to be pretty widely unknown, and that's a shame.

Holy isn't my usual jam, but there's a lot here to like regardless.  It's a bit of a double edged sword with its succinct length, being only 40 minutes long (which is a perfect sweet spot for metal in general but this particular type of stretched out atmoblack/doomdeath usually lends itself well to a more expansive experience) so it never wears out its welcome and it always feels like it's not much of an investment to give it a relisten, but there are surprisingly few standout sections despite the consistently high level of quality, so each relisten is breezy and simple but leaves little distinct impact beyond "the whole thing is pretty good".  And even then, that's not a bad thing at all, it means the entire experience is consistent and well done, but it does make it hard to write about and articulate why it resonates with me so much.

I think what it is is that there's a very boomy, bassy feel attached to these songs which would typically be presented in a much more thin and atmospheric way, similar to one of the things I like so much about Tchornobog.  That's not to say that atmosphere is diminished as a tradeoff for riffs and heaviness, merely that the ethereal spaciness of the songs work extremely well in tandem with the tumbling percussion and morbid tremolo riffs.  The vocals help as well, never screeching and instead sequestering themselves to a low growl, adding in more of that gruesome morbidity that keeps the songs from floating away.  There's a lot of give and take, with the two longer tracks indulging in the  post rock influence intrinsic to all bands of this style and the two shorter ones spending more time being crushing and doomy, but the two influences play off of each other very well and spend most of the runtime working in perfect harmony.

There's very little to dislike about Holy, it twists and turns through inspiring soundscapes and the crushing inevitability of death.  Like how Chrono Trigger feels like the most epic RPG of all time but actually only takes like 12 hours to complete, it's both expansive and truncated and crams a lot of ideas into a short amount of time.  If there's any problem here, it's really just that it flies by so quickly and leaves surprisingly few lasting melodies and sections in its wake.  I've found myself returning to it multiple times over the last week or so though, so clearly it's doing something right.  Count me as impressed.