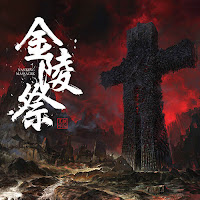 War is not cool

I know that's a really weird way to start a review for an extreme metal band out of China, but hear me out, I'm going somewhere with this.

Beyond the obvious problem of their songs just not being very good, it's the grand philosophical approach of Sabaton that grinds my gears.  Mainly, I just don't fucking like war and I like the idea of turning it into a bouncy pop metal institution even less.  Warfare is an easy enough topic for metal bands to cover, and if you're a band like Sabaton it's indeed quite possible to choose specific subjects that fit the atmosphere of your music.  The Battle of Thermopylae?  Hell yeah, you can easily make a rousing metal song out of an ancient conflict that spawned an underdog story that persisted for nearly 2500 years.  The problem is that Sabaton doesn't stick to that, and instead they very frequently reach to much more recent conflicts with nothing cool or badass about them.  It feels like such a fucking slap in the face to look at horrible crimes against humanity, excessively grimdark stains on human history like The Great War, The Invasion of Normandy, or the fucking Final Solution and turn them into pulsing major-key 80s aerobics metal anthems.  I don't want a god damned Disney version of the fucking Holocaust holy shit are you kidding me?  One of their only genuinely good songs ("Ghost Division") is a rousing, triumphant, fist-pounding jam about motherfucking Rommel rolling the tanks into Paris.  They're constantly blasting this happy-go-lucky and completely uncritical soldier worship and these ultra-jingoistic battle anthems and it's made them unwitting icons for the Wehraboos and DEUS VULT shouting racists of the world.  I hate their tone deaf bouncing idiocy and I hate their stupid shitty songs.  Fuck them, seriously.

I bring all of that up so I can contrast their proud dorkery with Black Kirin, a band that tackles the horrors of war from a much more appropriate angle.

Nanking Massacre is the complete tonal opposite of the kind of shit I was just raging about, because this is bleak, nihilistic, hopeless, mournful, and just god damned painful.  This is obviously a concept album about The Rape of Nanking, easily one of the most horrifying war crimes ever committed, and the fact that the band hails from the country that was on the receiving end of this tragedy (instead of gee I dunno rockstar Swedes or something) gives this a lot of extra weight.  There's a sense of genuine sincerity in the total hopeless anguish that permeates a track like "Da Qu" or the mournful reflection of "Thousand Years".  I understand that art is subjective and always open to interpretation, but as far as I'm concerned, this is the correct way to go about such a subject.

The album begins with an ambient intro, the kind of thing I normally hate because it's just a timewaster 99% of the time, but "1937" is a rare example of when one works.  Opening on air raid sirens and wailing children is cliche, sure, but it so perfectly sets the stage for the horrors to come.  I think it was kind of brilliant to fade that intro track out into another quiet section, because "Da Qu" doesn't really start the carnage.  No, there's another minute or so of suspense, and I think that works so well in the context of trying to put the listener in the shoes of the victims of this horrible tragedy.  The warnings came, the civilians retreated to the safety zone, and then came the tense, petrifying quiet as they awaited the Japanese army to take the city.  The first minute of the song sounds like an album outro.  It's over, the battle is lost, the city is in ruins, and the innocent are left to pick up the pieces.  But then, when 1:08 hits, Code lets out this fucking horrifying screech that stretches out over 25 seconds while the music picks up and gets more and more frantic.  The thing here is that the song never fully makes it to full on riff-salad savagery, instead staying mostly midpaced in the riffs with the drums occasionally picking up speed entirely disconnected from the riffs, while the strings and mournful clean vocals soar over the top and occasionally break down into discordant squealing.  It doesn't represent badass metal, it represents violent and destructive chaos.  For the citizens of Nanjing, the end truly was the beginning of the real horrors of the Second Sino-Japanese war.  It was done, Nanjing had fallen, the only ones left were non-combatant civilians who wanted nothing to do with slaughter, and what followed was a month and a half of inhuman torture, rape, and murder.  The way the album starts perfect represents that tentative calm after the initial bloodshed, only to be later hit with a flood of violence that seemed to never end.

This is also the only track on the album where the most controversial aspect of the band's debut returns, the Huadan vocals.  For the uninitiated, Huadan is a role in Chinese opera meant to express a young, innocent girl, and they were just really bizarre and out of place on National Trauma (an album that was otherwise Album of the Year material but severely hindered by their inclusion), only truly blending in with the music on like two tracks.  Here though?  No, they sound accusatory.  That voice traditionally meant to represent flowery innocence only pokes through for a few seconds during the most intense section of the song to spit fiery condemnation upon the war criminals currently turning the capital of China into a bloody crater.  It feels weird and wrong because it is weird and wrong, and it's here to remind you how weird and wrong this whole terrible venture was.  There's something similar on "The Song" but it's less obvious and feels less like the band is intentionally trying to conjure up the image of childhood innocence being ripped away in the midst of a whirlwind of inhumanity.

From there the album ebbs and flows until it mercifully ends on a mournful aria punctuated with occasional twangs of an acoustic instrument.  It perfectly encapsulates the uncertainty of the chaos around them at the time.  There are several extended ambient sections, both segregated into their own tracks and intruding on the few metal tracks as well, reminding you that the whole thing is a senseless, chaotic hellscape of nightmares that nobody was ever sure was going to end.  There are only three traditionally metal songs here ("Da Qu", "The Song", and "Wangchuan River") while the remaining four are fully ambient mood-setters.  Of the metal songs, "The Song" is probably the easiest to swallow for people who aren't here for the full experience and just want to hear kickass songs, because that one is by far the darkest and heaviest.  It features two extended ambient breaks but the other parts are so intense and pummeling that it almost defies description.  It's blasting, chaotic, hellsoaked barbarism expressed through the most death metally riffs the band would ever pen (contrasted with the more epic black metal that occupies the rest of their work).

Obviously though, I'm not quite as interested in simply headbanging my troubles away when listening to Nanking Massacre.  I'm here for the fully enrapturing atmosphere, and to that end "Da Qu" and "Wangchuan River" are far better.  Even so, all three of the traditional songs work incredibly well for what they represent.  The first perfectly showcases the panic and confusion of the terror as it begins, the second showcases the inhuman barbarity and the sheer extent of the war crimes committed on the Chinese innocents, and the third highlights the helpless destitution in the wake of the carnage, and the all-too-real fear that it may not even be actually finished.  And that's just the metal songs, the other four tracks are all sombre instrumental dirges in between the madness that always gives way to even further destruction.  In fact this is one of the only metal albums ever where I never have any intention of skipping the instrumental interludes, because without them the true feeling of panicked uncertainty wouldn't truly shine through.

I started this off with a small rant about Sabaton simply because they're immensely popular and most of my readers are surely familiar with them, and because I feel like Black Kirin is the complete polar opposite of them.  For Sabaton, they uncritically celebrate the heroics of warfare, the celebrity of valor on the battlefield, regardless of which side is conducting these campaigns (hence their occasional tone-deafness with making the Nazis the good guys, which come the fuck on dudes).  Black Kirin instead showcases the true human element of these wars.  Nanking Massacre isn't about battlefield heroics, it's about the mass slaughter of innocents once the battle is over.  Once the conflict has subsided and the chest-beating Bad Boys have their run of enemy territory, it quickly devolves into inhuman, callous destruction.  The true lasting effects of war have fuck-all to do with the superhero dogfighters and tank commanders, it's about the helpless innocents who wanted nothing to do with the senseless violence and get caught up in the crossfire, eventually becoming targets themselves as their lives are destroyed en masse.

With one of these approaches, you're looking at smiling heroes and ticker tape parades.  With the other, you're looking at thousands of naked innocent women and children casually dumped in a mass grave.  Maybe it's just because of my personal politics, but I think the making millions of dollars off the former is fucking insulting to the memories of the latter.  Nanking Massacre is a triumph of pulling back the curtain and screaming this is what you dumbasses are celebrating.